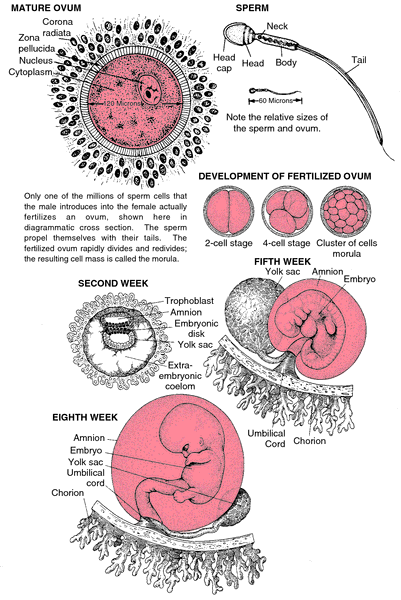 (rē'prō-dŭk'shŭn),
1. The total process by which organisms produce offspring. Synonym(s): generation (1) , procreation
2. The recall and presentation in the mind of the elements of a former impression.
[L. re-, again, + pro-duco, pp. -ductus, to lead forth, produce]
Farlex Partner Medical Dictionary © Farlex 2012

(rē'prō-dŭk'shŭn)
1. The recall and presentation in the mind of the elements of a former impression.
2. The total process by which organisms produce offspring.
Synonym(s): generation (1) , procreation.
[L. re-, again, + pro-duco, pp. -ductus, to lead forth, produce]
Medical Dictionary for the Health Professions and Nursing © Farlex 2012

Any process by which an organism gives rise to a new individual. Most biological reproduction is cellular and asexual and occurs by chromosomal duplication followed by elongation and splitting of the cell into two individual cells identical to the parent. Sexual reproduction is more complex and involves the production of specialized body cells called gametes which have experienced two stages of shuffling and redistribution of chromosomal segments and a reduction to half the full number of CHROMOSOMES (haploid). In the fusion of the male and female gametes, sperm and egg respectively (fertilization), the full complement of chromosomes is made up. The potential new individual now has a GENOME different from that of either parent and will differ in many respects. A fertilized ovum divides rapidly and repeatedly, but the reproduced cells do not usually separate, but continue to duplicate and specialize until a new individual is formed. Sometimes, after the first or second division, the reproduced cells separate to form genetically identical siblings.
Collins Dictionary of Medicine © Robert M. Youngson 2004, 2005

(rē'prō-dŭk'shŭn)
1. The total process by which organisms produce offspring.
2. The recall and presentation in the mind of the elements of a former impression.
[L. re-, again, + pro-duco, pp. -ductus, to lead forth, produce]
Medical Dictionary for the Dental Professions © Farlex 2012