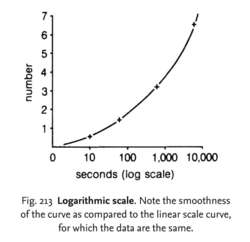 Feedback
Flashcards & Bookmarks ?
Please log in or register to use Flashcards and Bookmarks. You can also log in with
Flashcards ?
My bookmarks ?
+ Add current page to bookmarks
Mentioned in ?
References in periodicals archive ?
From these findings, the relationship between the infection manifested, in terms of the total area of the fruits, and the diagrammatic logarithmic scale which represents the percentage of damage the fungus caused in the fruit at different stages was developed.
A diagramatic scale to quantify severity of antracnose in Rubus glaucus Benth/Uma escala diagramatica para quantificar a severidade da antracnose em Rubus glaucus Benth
As background to the log-log plots (Figure 3), Armitage and Doll (12,13) in 1954 demonstrated that the age-specific incidence rates of certain epithelial cancers have a linear slope when plotted against the age of diagnosis on logarithmic scales. This logarithmic transformation of population data confirmed a theoretical equation relating the sequential development of carcinoma to a series of molecular changes and cellular events, and thereby supporting the multistage process of carcinogenesis with a continuous increase in cancer rate as a function of age.
Carcinomas of the pancreas, gallbladder, extrahepatic bile ducts, and ampulla of vater share a field for carcinogenesis: a population-based study
(The plot in figure 6 is on logarithmic scales, so the power-law dependence appears linear with slope [beta].)
The use of fatigue crack propagation testing in rubber compound development
The half-life of antibody to CHIKV was calculated by plotting the antibody titer versus age to 18 months on both linear and logarithmic scales. Using SPSS software (SPSS Inc., Chicago, IL, USA), we calculated the line of best fit by exponential regression (Figure 2).
Transplacental chikungunya virus antibody kinetics, Thailand
Due to the characteristics of logarithmic scales, that means the geodetic measurements indicate an earthquake that was twice as big as the one shown by seismic measurements.
Frisco's "Big One" 100 years later