[en´zīm]
any protein that acts as a catalyst, increasing the rate at which a chemical reaction occurs. The human body probably contains about 10,000 different enzymes. At body temperature, very few biochemical reactions proceed at a significant rate without the presence of an enzyme. Like all catalysts, an enzyme does not control the direction of the reaction; it increases the rates of the forward and reverse reactions proportionally.

Enzymes work by binding molecules so that they are held in a particular geometric configuration that allows the reaction to occur. Enzymes are very specific; few molecules closely fit the binding site. Each enzyme catalyzes a specific type of chemical reaction between a few closely related compounds, which are called substrates of the enzyme.

Enzymes are given names ending in -ase. In older names, the suffix is added to the name of the substrate, as in amylase, an enzyme that breaks down the polysaccharide amylose. In newer names, the suffix is added to the type of reaction, as in lactate dehydrogenase, an enzyme that converts lactate to pyruvate by transferring a hydrogen atom to nicotinamide-adenine dinucleotide (NAD).
Regulation of Enzymes. The reaction rate of an enzyme-catalyzed reaction varies with the pH, temperature, and substrate concentration. Under physiologic conditions the rates of many reactions are controlled by substrate concentrations. Certain key reactions are controlled by one of three different mechanisms.

In allosteric regulation, the enzyme can bind molecules, which are referred to as effectors, at a site other than the active site, which is referred to as an allosteric site. In many biochemical pathways the enzyme that catalyzes the first reaction in the pathway is inhibited by the final product of the last reaction, so that when sufficient product is present the whole pathway is shut down. This is an example of negative feedback.

All enzymes are controlled by their rate of synthesis. Like all proteins, enzymes are synthesized by ribosomes, which translate the genetic information coded in the deoxyribonucleic acid (DNA) of the chromosomes into the specific amino acid sequence of the enzyme. The expression of many genes is controlled by the processes of genetic regulation. Thus, although each cell contains the information to make all of the body's enzymes, it actually makes only those appropriate for its specific type of cell. The synthesis of some enzymes can be induced or repressed by the action of specific hormones, substrates, or products so that the enzyme is produced only when metabolic conditions require its presence.
Inborn Errors of Metabolism. Hundreds of genetic diseases that result from deficiency of a single enzyme are now known. Many of these diseases fall into two large classes. The aminoacidopathies result from deficiency of an enzyme in the major pathway for the metabolism of a specific amino acid. The amino acid accumulates in the blood, and it or its metabolites are excreted in the urine. The lysosomal storage diseases result from deficiency of a lysosomal enzyme and the accumulation of the substance degraded by that enzyme in lysosomes of cells throughout the body. The stored material is usually a complex substance, such as glycogen, a sphingolipid, or a mucopolysaccharide.ƒ

An example of an aminoacidopathy is phenylketonuria (PKU), which results from a deficiency of the enzyme phenylalanine hydroxylase, which converts the amino acid phenylalanine to tyrosine. Phenylalanine accumulates in the blood and phenylpyruvic acid is excreted in the urine. The phenylalaninemia eventually results in mental retardation due to defective formulation of myelin. However, PKU can be detected at birth by a screening test for phenylalanine in the blood, and clinical symptoms can be avoided by strict adherence to a low-phenylalanine diet.

An example of a lysosomal storage disease is tay-sachs disease, which results from a deficiency of the enzyme hexosaminidase A. The stored substance is a sphingolipid, GM2-ganglioside, which accumulates in nerve tissue, causing blindness and mental deterioration. No cure is possible, but antenatal diagnosis can be made by determining hexosaminidase A activity in fetal fibroblasts from an amniotic fluid specimen drawn by amniocentesis. It is also possible to identify carriers (heterozygotes) who are at risk for having children with the disease.
Enzyme Assays. Several enzymes are important in clinical pathology. Enzymes characteristic of a tissue are released into the blood when the tissue is damaged; hence assays of serum enzyme levels can aid in the diagnosis or monitoring of specific diseases. Lipase and amylase levels are useful in pancreatic diseases; alkaline phosphatase (ALP), lactate dehydrogenase (LD), aspartate transaminase (AST or GOT), and alanine transaminase (ALT or GPT) in liver diseases; and LD and creatine kinase (CK) in myocardial infarction. ALP is also released in bone diseases. Many enzymes have different forms (isoenzymes) in different organs. The isoenzymes can be separated by electrophoresis in order to determine the origin of the enzyme. Isoenzymes of LD, CK, and ALP have the most clinical utility.
See accompanying table.
activating enzyme one that activates a given amino acid by attaching it to the corresponding transfer ribonucleic acid.
brancher enzyme (branching enzyme) α-glucan-branching glycosyltransferase: an enzyme involved in conversion of amylose to amylopectin; deficiency of this enzyme causes amylopectinosis.
constitutive enzyme one produced by a microorganism regardless of the presence or absence of the specific substrate acted upon.
debrancher enzyme (debranching enzyme) dextrin-1,6-glucosidase: an enzyme that acts on glucose residues of the glycogen molecule and is important in glycogenolysis; deficiency of this enzyme causes Forbes' disease.
induced enzyme (inducible enzyme) one whose production requires or is stimulated by a specific small molecule, the inducer, which is the substrate of the enzyme or a compound structurally related to it.
proteolytic enzyme one that catalyzes the hydrolysis of proteins and various split products of proteins, the final product being small peptides and amino acids.
repressible enzyme one whose rate of production is decreased as the concentration of certain metabolites is increased.
respiratory e's enzymes of the mitochondria, e.g., cytochrome oxidase, which serve as catalysts for cellular oxidations.

(en'zīm),
A macromolecule that acts as a catalyst to induce chemical changes in other substances, while itself remaining apparently unchanged by the process. Enzymes, with the exception of those discovered long ago (for example, pepsin, emulsin), are generally named by adding -ase to the name of the substrate on which the enzyme acts (for example, glucosidase), the substance activated (for example, hydrogenase), and/or the type of reaction (for example, oxidoreductase, transferase, hydrolase, lyase, isomerase, ligase or synthetase-these being the six main groups in the Enzyme Nomenclature Recommendations of the International Union of Biochemistry). For individual enzymes not listed below, see the specific name.
Synonym(s): organic catalyst (1)
[G. + L. en, in + zymē, leaven]

(ĕn′zīm)
n.
Any of numerous compounds that are produced by living organisms and function as biochemical catalysts. Some enzymes are simple proteins, and others consist of a protein linked to one or more nonprotein groups.
en′zy·mat′ic (-zə-măt′ĭk), en·zy′mic (-zī′mĭk, -zĭm′ĭk) adj.
en′zy·mat′i·cal·ly, en·zy′mi·cal·ly adv.

A protein that catalyzes most chemical reactions in biological systems without itself being destroyed or altered by the reaction; enzymes accelerate the rate of reactions by lowering transition state energy Enzyme Commission groups Oxidoreductase, transferase, hydrolase, lyase, isomerase, ligase.

(en'zīm)
A protein that acts as a catalyst to induce chemical changes in other substances, while remaining apparently unchanged itself by the process. Enzymes, with the exception of those discovered long ago (e.g., pepsin, emulsin), are generally named by adding -ase to the name of the substrate on which the enzyme acts (e.g., glucosidase), the substance activated (e.g., hydrogenase), or the type of reaction (e.g., oxidoreductase, transferase, hydrolase, lyase, isomerase, ligase or synthetase-these being the six main groups in the Enzyme Nomenclature Recommendations of the International Union of Biochemistry).
[G. + L. en, in + zymē, leaven]

A biochemical catalyst that enormously accelerates a chemical reaction. Enzymes are complex protein molecules highly specific to particular reactions. Almost everything that happens in the body, at a chemical level, is mediated by one or more of the many thousands of different enzymes in the cells, and much of the length of each DNA molecule consists of codes for enzymes. 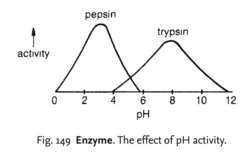 a protein molecule that catalyses a biochemical reaction by lowering the ACTIVATION ENERGY required for the reaction to proceed. Enzymes are usually specific to particular substrates (see ACTIVE SITE) and are sensitive to environmental conditions such as pH and temperature (see Fig. 149, and Q10 ). ALLOSTERIC ENZYMES exist in inactive and active forms, while others can be inhibited by nonsubstrate molecules (see COMPETITIVE INHIBITION, NONCOMPETITIVE INHIBITION). Protein-splitting enzymes (PROTEASES) are produced in nonactive forms in the mammalian digestive system to minimize the risk of self-digestion. For example, TRYPSIN is produced as inactive trypsinogen.

A protein substance which catalyses (i.e. enhances a chemical reaction in other bodies without undergoing a change in itself) and is formed by living cells but can act independently of their presence. Example: Enzyme preparations (containing pancreatin, papain or subtilisin A) used to break down tear proteins that become attached to the surface of contact lenses. See contact lens deposits; phagocytosis; surfactant; wetting solution.

(en'zīm)
A macromolecule that acts as a catalyst to induce chemical changes in other substances, while itself remaining apparently unchanged by the process.

Q. My muscle enzymes are at 355, my DR says normal is 200. She refered me to a Neurologist. What could be wrong? I am experiencing sore legs when I walk, weakness, and sometimes difficulty in swallowing. I am 46 I had a minor heart attack 5 yrs ago with a stent placed in my LAD. I am on Crestor 10mg. my Dr. has adjusted the dosage several times and used other drugs but it doesn't change the results much if at all.

A. Crestor itself may cause elevated muscle enzymes (you probably refer to Creatine Kinase, http://en.wikipedia.org/wiki/Creatine_kinase). However, weakness and swallowing problems may raise the suspicion of a disease of the nerves or muscles.
More discussions about Enzyme