[lo´ah]
a genus of filarial nematodes.
Loa lo´a a threadlike species found in West Africa, 2–5 cm (1–2 in) long, that inhabits the subcutaneous connective tissue of the body, which it traverses freely (see loiasis). It is seen especially about the orbit, including under the conjunctiva, causing itching and occasionally edematous swellings. The immature forms, or microfilariae, are diurnal, being found in the peripheral circulation in greatest concentrations during the day. Flies of the genus Chrysops are the intermediate hosts and vectors.

(lō'ă lō'ă),
The African eye worm, a species of the family Onchocercidae (superfamily Filarioidea) that is indigenous to the western part of equatorial Africa, especially in the region of the Congo River, and is the causal agent of loiasis. Adult worms are white or gray-white, cylindric, and threadlike, the males averaging 25-35 × 0.3-0.4 mm (with a curved tail) and the females ranging from 50-60 × 0.4-0.6 mm; microfilariae are ensheathed, with nuclei extending to the tip of the tail. The life cycle is somewhat similar to that of Wuchereria species; humans are the only known definitive host, and parasites are transmitted by Chrysops flies (family Tabanidae); infective larvae from the latter require 3 years or more to mature in humans, and the adult forms may persist in a human host for as long as 17 years.
See also: loiasis.

(lō'ă lō'ă)
The African eye worm, a species of the family Onchocercidae that is the causal agent of loiasis. Humans are the only known definitive host, and parasites are transmitted by Chrysops flies; infective larvae from the latter require at least 3 years to mature in humans, and the adult forms may persist in humans for as long as 17 years.
See also: loiasis 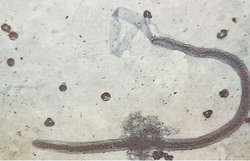 (lō′ă) [W. African]
The African eyeworm, a species of filarial worm that infests the subcutaneous tissues and conjunctiva of humans. Its migration causes itching and a creeping sensation. Sometimes it causes itchy edematous areas known as Calabar swellings. It is transmitted by flies of the genus Chrysops.
See: illustrationillustration

A filarial worm, known as the African eye worm. 2.5–6 cm long the worms are acquired by the bite of the Chrysops fly and may live in the tissues under the skin for over 15 years, causing Calabar swellings. Occasionally a worm can be observed passing across the white of the eye under the CONJUNCTIVA. See also LOIASIS.

Feedback
Flashcards & Bookmarks ?
Please log in or register to use Flashcards and Bookmarks. You can also log in with
Flashcards ?
My bookmarks ?
+ Add current page to bookmarks
TheFreeDictionary presents:
Write what you mean clearly and correctly.
Mentioned in ?
References in periodicals archive ?
A peripheral blood smear demonstrated the presence of sheathed microfilariae of Loa loa quantified at 4,910 microfilariae/mL of blood.
The Mectizan[R] Program has now been modified in Loa loa-endemic regions of Africa due to the risks of potentially fatal encephalopathy in persons co-infected with Loa loa and exhibiting excessive microfilaremias.
Ocular filariasis in US residents, returning travelers, and expatriates
The serious side effects of Loa loa and the difficulty of rapidly quantifying Loa levels in patients before treatment make it too risky to broadly administer IVM, representing a major setback in the efforts to eradicate river blindness and elephantiasis.
Mobile Phone Microscope Finds Parasites in Blood
Three probable cases of Loa loa encephalopathy following ivermectin treatment for onchocerciasis.
Relationship between the prevalence and intensity of Loa loa infection in the Central Province of Cameroon.
Adverse reactions from community directed treatment with ivermectin (CDTI) for onchocerciasis and loiasis in Ondo State, Nigeria
Loaiasis, as this Loa loa infestation is called, is treatable in the early stages, when the symptoms are not very pronounced.
BUG OF THE MONTH
2 (0.5) 2 (0.6) Filariae ([dagger]) 26 (7.0) 18 (5.3) Mansonella perstans 26 (7.0) 18 (5.3) Loa loa 3 (0.8) 1 (0.3) Syphilis 39 (10.5) 33 (9.8) Hepatitis B virus 111 (30) 98 (29.1) Hepatitis C virus 5 (1.4) 4 (1.2) HIV 2 (0.5) 1 (0.3) SMM, no.
Submicroscopic Malaria in Migrants from Sub-Saharan Africa, Spain
About 4 months after Taylor had set aside this painting, he witnessed something wriggling in his eye and promptly sought medical care, which resulted in an eye surgeon extracting a Loa loa worm from Taylor's eye.
Taylor discovered that he had returned from this travels not just with Loa loa but with two additional parasitic diseases, hookworm infection and strongyloidiasis.
A Worm's Eye View
Rapid molecular assays for specific detection and quantitation of Loa loa microfilaremia.
Rapid, novel, specific, high-throughput assay for diagnosis of Loa loa infection.
Loiasis in us traveler returning from Bioko Island, Equatorial Guinea, 2016
To the Editor: Loa loa, the African eye worm, is a filarial pathogen of Central African rainforest regions.
Loa loa infection in pregnant women, Gabon