Bacteria are single-celled microorganisms that differ from all other organisms (the eukaryotes) in lacking a true nucleus and organelles such as mitochondria, chloroplasts, and lysosomes. Their genetic material consists of a single loop of double-stranded DNA, whereas the genetic material of eukaryotes consists of multiple chromosomes, which are complex structures of DNA and protein.

Bacteria reproduce by cell division about every 20 minutes, giving them a very high rate of population growth and evolution. Genetic material can be transferred between bacteria by three processes: transformation (absorption of naked DNA), transduction (transfer by a virus), and conjugation (transfer by independently replicating DNA molecules, called plasmids, which can be inserted into the bacterial DNA). Some bacteria can also form spores, dehydrated forms that are relatively resistant to heat, cold, lack of water, toxic chemicals, and radiation.

Most bacteria have a rigid cell wall outside of the cell membrane primarily composed of a dense layer of peptidoglycan, a network of polysaccharide chains with polypeptide crosslinks. Some antimicrobials, the penicillins and cephalosporins, act by interfering with peptidoglycan synthesis.

Bacteria can have any of three types of external structures: flagella (whiplike locomotor organelles), pili (minute filamentous appendages), or a capsule (a layer of gelatinous material around the cell). Various types of pili are involved in conjugation and in the adherence of bacteria to mucosal surfaces. The capsule protects the bacterium from phagocytosis. 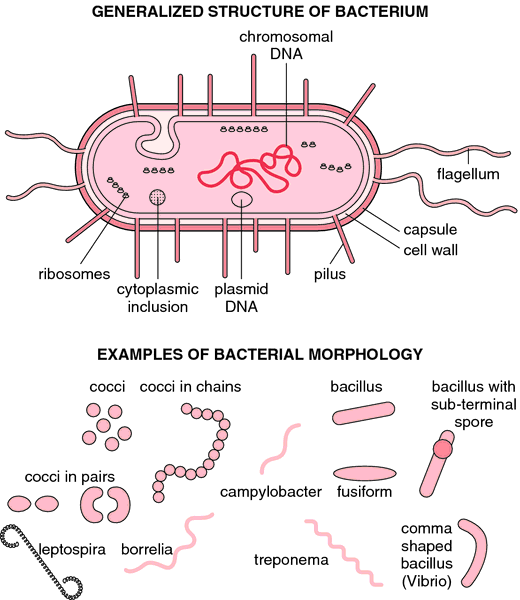 Bacterial structure and morphology. From Hart and Shears, 1997.
Classification of Bacteria. Bacteria are classified into two major groups, gram-positive and gram-negative, based on their reaction to Gram stain. Other important classification characteristics are morphology and metabolic reactions. A spherical bacterium is called a coccus. Some species do not always completely separate when the cells divide and characteristically occur in pairs (see diplococcus), clusters (see staphylococcus), or chains (see streptococcus). A rod-shaped bacterium is called a bacillus. Some species have tapered ends (fusiform bacilli) or are shaped like long threads (filamentous bacilli) or spirals (spirochetes).

On the basis of their requirements for atmospheric oxygen, bacteria can be divided into obligate aerobes, which require oxygen; obligate anaerobes, which grow only in the absence of oxygen; and facultative anaerobes, which adapt to either environment. On the basis of their growth on a specific medium under aerobic and anaerobic conditions, certain groups are divided into oxidizers, those that use oxygen to metabolize sugars; fermenters, those that metabolize sugars in the absence of oxygen; and nonutilizers, which do not grow on the medium.

Two groups of prokaryotic organisms are sometimes not classified as bacteria. These are Cyanobacteria (the blue-green bacteria), which have aerobic photosynthesis like plants; and Mycoplasma, which lack cell walls.
Bacterial Infection. The skin, respiratory tract, and gastrointestinal tract are inhabited by a variety of bacteria. These normal flora are harmless or even helpful, protecting their host by interference with the growth of harmful bacteria. An opportunistic infection occurs when an organism indigenous to one part of the body invades another part where it is pathogenic. A commonly occurring example is infection of the urinary tract with Escherichia coli or other enteric bacilli.

There are many mechanisms by which pathogenic bacteria can be transmitted from person to person, including airborne infection, direct contact, contact with animals, transmission by insect vectors, or indirect transmission in drinking water, milk, or food or on inanimate objects. Although some diseases, such as cholera and botulism, are caused by toxins absorbed in the intestine, most diseases occur from bacteria that can attach to a mucosal surface, multiply, and invade tissue. To be pathogenic, bacteria must also be able to resist the host defenses: bactericidins, such as complement and lysozyme in the blood, and phagocytosis and subsequent intracellular destruction by leukocytes.

Bacteria can cause disease by producing toxins, by causing inflammation or the formation of granulomas, or by inducing a hypersensitivity reaction. exotoxins are extremely potent poisons produced by some gram-positive bacteria. These include neurotoxins, such as tetanus toxin and botulinum toxin; enterotoxins, such as cholera toxin; and diphtheria toxin, which blocks protein synthesis, thereby causing tissue necrosis. endotoxins are lipopolysaccharides that are components of the outer membrane of gram-negative cell walls and are released on cell lysis. They can cause hypotension, fever, disseminated intravascular coagulation, and shock. Other toxins include hemolysins and leukocidins, which destroy red and white blood cells; kinases, which lyse blood clots; and enzymes that attack tissue.

Host resistance to infection is lowered in weak and debilitated patients and in those with a decreased ability to mount an effective immune response because of disease or the effects of drugs (such as corticosteroids, immunosuppressive agents, or cytotoxic agents).

A major problem in antimicrobial therapy is the evolution of antibiotic-resistant strains of bacteria, which are an important cause of serious nosocomial infections. Unnecessary overuse of antimicrobial agents speeds up the evolution of resistant strains. This problem is exacerbated by the transfer of resistance between different species by plasmids, producing multiple drug-resistant strains.
Diseases Caused by Bacteria. The different kinds of bacteria tend to affect different organs and systems of the body, producing infectious diseases, each with its own group of symptoms.

Staphylococci are generally found on the surface of the skin. When they invade the body tissue, for instance through a cut, they usually produce a local infection with inflammation and pus. Occasionally a strain of staphylococcus develops that can cause an infection affecting more than a local area of the body, but this is relatively rare.

Pneumonia, meningitis, and gonorrhea are produced by different types of diplococci. The pneumococcus, which produces pneumonia, has its special effect on the lungs; the meningococcus has an affinity for the meninges of the brain and spinal cord. Both types of bacteria enter the body via the respiratory tract. gonorrhea, spread by bacteria called gonococci, is usually spread by coitus.

Bacilli are responsible for many serious diseases, including plague, diphtheria, leprosy, tuberculosis, and typhoid fever. Prevention and control of the spread of many infectious diseases can be accomplished through immunization and proper sanitary conditions.
acid-fast bacterium one that is not readily decolorized by acids after staining, especially Mycobacterium and Nocardia.
blue-green bacteria see Cyanobacteria.
coliform bacterium one of the gram-negative rod-shaped bacteria that are normal inhabitants of the intestinal tract of humans and animals.
hemophilic bacteria bacteria that have a nutritional affinity for constituents of fresh blood or whose growth is significantly stimulated on blood-containing media.
lactic acid bacteria bacteria that, in suitable media, produce fermentation of carbohydrate materials to form lactic acid.
lysogenic bacterium any bacterial cell harboring in its genome the genetic material (prophage) of a temperate bacteriophage and thus reproducing the bacteriophage in cell division; occasionally the prophage develops into the mature form, replicates, lyses the bacterial cell, and is free to infect other cells.
water bacterium a gram-negative bacterium capable of rapid growth in all types of water and producing pyrogenic infections, especially in immunocompromised hospital patients, occurring as contaminants in hemodialysis fluids and in flood waters. Genera of medical importance include Aeromonas, Flavobacterium, and Pseudomonas.
Miller-Keane Encyclopedia and Dictionary of Medicine, Nursing, and Allied Health, Seventh Edition. © 2003 by Saunders, an imprint of Elsevier, Inc. All rights reserved.

a group of Gram-positive BACTERIA (see GRAM'S STAIN that carry out a LACTIC ACID FERMENTATION in which SUGARS, such as LACTOSE, are converted to lactic acid. The acidity inhibits the GROWTH of competing bacteria. These bacteria are used in the food industry, for example in the preparation of dairy products, pickles and sauerkraut, but they can also cause food spoilage. Such bacteria are found in the GENUS Lactobacillus.
Collins Dictionary of Biology, 3rd ed. © W. G. Hale, V. A. Saunders, J. P. Margham 2005