[or´gan]
organum.
accessory digestive o's (accessory o's of digestive system) organs and structures not part of the alimentary canal that aid in digestion; they include the teeth, salivary glands, liver, gallbladder, and pancreas.
organ of Corti the organ lying against the basilar membrane in the cochlear duct, containing special sensory receptors for hearing, and consisting of neuroepithelial hair cells and several types of supporting cells.
effector organ a muscle or gland that contracts or secretes, respectively, in direct response to nerve impulses.
enamel organ a process of epithelium forming a cap over a dental papilla and developing into the enamel.
end organ end-organ.
Golgi tendon organ any of the mechanoreceptors arranged in series with muscle in the tendons of mammalian muscles, being the receptor for stimuli responsible for the lengthening reaction.
reproductive o's see reproductive organs, female and reproductive organs, male.
sense o's (sensory o's) organs that receive stimuli that give rise to sensations, i.e., organs that translate certain forms of energy into nerve impulses that are perceived as special sensations.
spiral organ organ of Corti.
target organ the organ affected by a particular hormone.
vestigial organ an undeveloped organ that, in the embryo or in some remote ancestor, was well developed and functional.
o's of Zuckerkandl para-aortic bodies.

[TA]
a prominent ridge of highly specialized epithelium in the floor of the cochlear duct overlying the basilar membrane of cochlea, containing one inner row and three outer rows of hair cells, or cells of Corti (the auditory receptor cells innervated by the cochlear nerve) supported by various columnar cells: the pillars of Corti, cells of Hensen, and cells of Claudius; the spiral organ is partly overhung by an awninglike shelf, the tectorial membrane, the free marginal zone of which is covered by a gelatinous substance in which the stereocilia of the outer hair cells are embedded.
Synonym(s): organum spirale [TA], acoustic papilla, Corti organ, organ of Corti

(kôr′tē)
n.
A specialized structure located on the inner surface of the basilar membrane of the cochlea containing hair cells that transmit sound vibrations to the nerve fibers.

(ōr'găn kōr'tē)
Specialized hair cells that receive sound vibrations and transmit them as impulses to the brain; located on basilar membrane of inner ear in two rows that slope against each other.
[Alphonso Corti, 1822-1888, Italian anatomist] 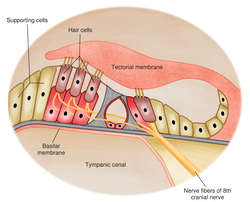 An elongated spiral structure running the entire length of the cochlea in the floor of the cochlear duct and resting on the basilar membrane. It contains the receptors for hearing, hair cells that are stimulated by sound waves.
Synonym: organum spirale; spiral organ See: illustration; Claudius' cell
See also: Corti, Alfonso Giacomo Gaspare

A spiral structure on the inner surface of the basilar membrane of the COCHLEA that contains a large series of sensory receptors that respond to sound vibrations of different frequencies and stimulate appropriate nerve impulses subserving hearing. (Marquis Alfonso Corti, 1822–88, Italian anatomist).