[dōs]
the quantity to be administered at one time, as a specified amount of medication or a given quantity of radiation.
absorbed dose that amount of energy from ionizing radiations absorbed per unit mass of matter, expressed in rads.
air dose the intensity of an x-ray or gamma-ray beam in air, expressed in roentgens.
booster dose an amount of immunogen (vaccine, toxoid, or other antigen preparation), usually smaller than the original amount, injected at an appropriate interval after primary immunization to sustain the immune response to that immunogen.
curative dose (CD) a dose that is sufficient to restore normal health. See also median curative dose.
divided dose fractionated dose.
effective dose (ED) that quantity of a drug that will produce the effects for which it is administered. See also median effective dose.
erythema dose that amount of radiation that, when applied to the skin, causes erythema (temporary reddening).
fatal dose lethal dose.
fractionated dose a fraction of the total dose prescribed, as of chemotherapy or radiation therapy, to be given at intervals, usually during a 24-hour period.
infective dose (ID) that amount of a pathogenic agent that will cause infection in susceptible subjects. See also median infective dose and tissue culture infective dose.
lethal dose (LD) that quantity of an agent that will or may be sufficient to cause death. See also median lethal dose and minimum lethal dose.
loading dose a dose of medication, often larger than subsequent doses, administered for the purpose of establishing a therapeutic level of the medication.
maintenance dose the amount of a medication administered to maintain a desired level of the medication in the blood.
maximum tolerated dose tolerance dose.
maximum permissible dose the largest amount of ionizing radiation that one may safely receive within a specified period according to recommended limits in current radiation protection guides. The specific amounts vary with age and circumstance.
median curative dose (CD50) a dose that abolishes symptoms in 50 per cent of test subjects.
median effective dose (ED50) a dose that produces the desired effect in 50 per cent of a population.
median infective dose (ID50) that amount of pathogenic microorganisms that will produce demonstrable infection in 50 per cent of the test subjects.
median lethal dose (LD50) the quantity of an agent that will kill 50 per cent of the test subjects; in radiology, the amount of radiation that will kill, within a specified period, 50 per cent of individuals in a large group or population.
median tissue culture infective dose (TCID50) that amount of a pathogenic agent that will produce infection in 50 per cent of cell cultures inoculated.
minimum lethal dose
1. the amount of toxin that will just kill an experimental animal.
2. the smallest quantity of diphtheria toxin that will kill a guinea pig of 250-gm weight in 4 to 5 days when injected subcutaneously.
reference dose an estimate of the daily exposure to a substance for humans that is assumed to be without appreciable risk; it is calculated using the no observed adverse effect level and is more conservative than the older margin of safety.
skin dose (SD)
1. the air dose of radiation at the skin surface, comprising the primary radiation plus backscatter.
2. the absorbed dose in the skin.
threshold dose the minimum dose of ionizing radiation, a chemical, or a drug that will produce a detectable degree of any given effect.
threshold erythema dose (TED) the single skin dose that will produce, in 80 per cent of those tested, a faint but definite erythema within 30 days, and in the other 20 per cent, no visible reaction.
tissue culture infective dose (TCID) that amount of a pathogenic agent that will produce infection when inoculated on tissue cultures; used with a numeric qualifier.
tolerance dose the largest quantity of an agent that may be administered without harm. Called also maximum tolerated dose.
Miller-Keane Encyclopedia and Dictionary of Medicine, Nursing, and Allied Health, Seventh Edition. © 2003 by Saunders, an imprint of Elsevier, Inc. All rights reserved.

Abbreviation for lethal dose.
Medical Dictionary for the Health Professions and Nursing © Farlex 2012 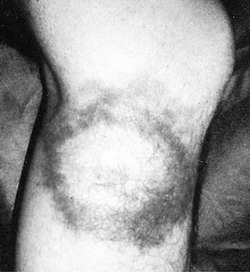 LYME DISEASE: Classic rash with central clearing
A multisystem disorder caused by the spirochete Borrelia burgdorferi and the most common tick-borne disease in the U.S. The disease is endemic in New England, but cases have been reported in all 50 states and in 20 other countries, including Germany, Switzerland, France, and Australia. It occurs most often in the spring and summer, when its deer tick vectors (genus Ixodes) are most active. Prompt removal of visible ticks from the skin before they become attached or gain access to the bloodstream (in the first 24 to 48 hr) decreases the risk of transmission.

The infected tick injects its spirochete-laden saliva into the bloodstream, where they incubate for 3 to 32 days and then migrate to the skin, causing the characteristic erythema migrans (EM) rash.

The disease is best diagnosed by the presence of EM, which begins as a red macule or papule at the site of the tick bite and expands in a red ring, leaving a clear center like a target or bull’s eye. The lesion usually feels hot and itchy and may grow to over 20 in (50.8 cm) as more lesions erupt. The lesion is later replaced by red blotches or diffuse urticaria. Conjunctivitis, malaise, fatigue, and flulike symptoms and lymphadenopathy may occur. Antibody tests for Borrelia burgdorferi with an enzyme-linked immunosorbent assay (ELISA) test are also used for diagnosis in patients with a history of exposure and signs and symptoms of Lyme disease but with no evidence of rash. The antibodies are developed against flagellar and outer surface proteins on the spirochete. See: illustration

The course of Lyme disease is divided into three stages. 1 localized infection: begins with the tick bite and proceeds as above.2 disseminated infection: begins weeks to months later. The spirochetes spread to the rest of the body through the blood, in some cases causing arthritis (esp. of the knee joints), muscle pain, cardiac dysrhythmias, pericarditis, lymphadenopathy, or meningoencephalitis. Nonprotective antibodies develop during this stage.3 chronic infection: begins weeks to years after the initial bite. Patients develop mild to severe arthritis, encephalitis, or both, which rarely are fatal.

Oral doxycycline or ampicillin (14–21 or –28 day course) effectively eradicates early uncomplicated Lyme disease. Erythromycin or cefuroxime axetil may be administered to patients allergic to penicillin. Patients with cardiac and neurological involvement may need to be treated with intravenous cephalosporins.

When the disease is treated early, results are good. If treated late, convalescence is prolonged, but complete recovery is the usual outcome in most patients.

The Centers for Disease Control recommends that people should discuss with their health care providers the possibility of getting a Lyme disease vaccination if they are between 15 and 70 years old; live, work, or vacation in endemic areas; or frequently go into wooded or grassy areas. The vaccine is not recommended for children, pregnant women, and those who do not live in or visit endemic areas.

When planning to spend time in places where ticks may be located, people should wear clothing impregnated with insect repellents, hats, long sleeves, pants tucked into socks, heavy shoes, and a tick repellent containing DEET (N, N-diethyltoluamide). Tick repellent should not be directly applied to an infant or toddler’s skin because of the danger of neurotoxicity. If possible, people should stay on paths and away from high grass or brush. They should check clothing carefully for ticks when leaving those areas although tick nymphs, which are smaller than 1 mm in length, may not be easily seen. Once home, people should remove and wash clothing and check their entire body, esp. the hairline and ankles, for ticks or nymphs. If a tick or nymph is found, it should be carefully removed with tweezers, esp. the head and mouth parts, but the body of the tick or nymph must not be squeezed. The site may then be cleansed with an antiseptic, but should be observed for signs of infection (redness, swelling, pain, rash), and the primary health care provider contacted if infection is suspected. Some people make the mistake of trying to remove ticks or nymphs with alcohol, a lighted match, or petroleum jelly. These measures are ineffective and may increase the risk of transmission of tick-borne diseases. Prophylactic antibiotics generally should not be requested (or given). Although pet dogs may receive Lyme vaccine, they should still be checked to prevent them from bringing ticks into the house.

The patient is checked for any drug allergies. Prescribed pharmacologic therapy is explained to the patient, including dosing schedule, the importance of completing the course of therapy even if he feels better, and adverse effects. Patients being treated for Lyme disease often require antibiotics for a prolonged period, esp. in advanced stages, which increases their risk for developing adverse effects (e.g., diarrhea). Methods for dealing with these problems are explained. Patients with chronic Lyme disease often require assistance to deal with changes in lifestyle, family interactions, and ability to perform daily activities. Available local and national support groups can assist with such problems. Patients should be made aware that one occurrence of Lyme disease does not prevent recurrences. The U.S. Department of Health and Human Services has made Lyme disease prevention a priority under its program “Healthy People 2010.” Patients can be referred to the Lyme Disease Foundation (860-870-0070; http://www.lyme.org) or the American Lyme Disease Foundation (http://www.aldf.com) for information and support.