[yoong]
Carl Gustav (1875–1961). Swiss-born psychologist and psychiatrist; the founder of analytic psychology. He received his medical degree from the University of Basel and continued his education at the University of Zurich, where he worked as research assistant and lecturer and later served on the staff of the university psychiatric clinic under the direction of Eugen Bleuler, another important Swiss psychologist.

Although Jung corresponded with freud, who at first saw him as a possible successor, their relationship was short-lived, primarily because of Jung's rejection of Freud's concept of the libido. It is perhaps their differing concepts of the unconscious mental life that distinguishes freudian and jungian psychology the most. In regard to technique, analytical psychotherapy as formulated by Jung attaches more importance to an analysis and interpretation of certain aspects of the subject's dreams and fantasies and far less emphasis on free association than does freudian psychoanalysis.

Jung's view of the dynamics of personality represents an attempt to interpret human behavior from a philosophic, religious, and mystical, as well as scientific, viewpoint. Many of his concepts deal with disciplines and phenomena outside the field of psychology. Among these is the notion of a “collective unconscious,” which is said to permeate each “personal unconscious” psyche and which enters consciousness only in symbolic form to indirectly influence thought and behavior. The whole personality (psyche) consists of these three interacting systems: the collective unconscious, the personal unconscious, and the conscious mind (ego).

The ego is the center of the conscious; it comprises the conscious perceptions, thoughts, and feelings, and is the focal point for individual identity. It stands between the inner and outer world and permits the individual to adapt to the environment. Much of the psychic activity within an individual involves the ego's interaction with internal and external reality.

The personal unconscious consists of the individual's experiences, wishes, and impulses, which were once conscious but have been repressed or forgotten, but can be brought to consciousness once again.

The primary archetype from which all others come is the self, the organizing center from which all the regulatory forces of the psyche emanate. It is responsible for the integration and stability of personality, the hidden tendency directing the process of psychic growth. The self is central to jungian personality theory and is expressed in the innate striving of each person toward psychic wholeness, a process Jung calls individuation, or the striving for self-realization. Jung viewed neurosis as a disturbance of the process of individuation; hence, his analytical therapy aims at a restoration of the process of self-realization.

In Jung's 1921 work Psychological Types, he proposed personality types(introversion and extraversion) and the four mental processes or functions of thinking, feeling, sensation, and intuition. The extraverted personality type is described by Jung as one whose philosophy of life is markedly collective and based only on what others say and do. Psychic energy (libido) is directed toward external happenings. The introverted personality type is characterized by an inward turning of libido, a focusing of interest on the subjective, inner aspects of life. There are many degrees of extraversion and introversion and pure types are rare. The four functions are seen as the natural aspects of conscious orientation: the means by which one gets one's bearings in the midst of an abundance of impressions from the environment. 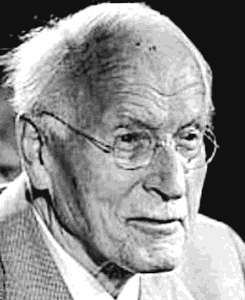 Feedback
Flashcards & Bookmarks ?
Please log in or register to use Flashcards and Bookmarks. You can also log in with
Flashcards ?
My bookmarks ?
+ Add current page to bookmarks
Mentioned in ?
References in periodicals archive ?
Reichgott Junge went off the board by referring to a mood depicted in the Disney film.Instead of Daniels' pink mood (for love), the film has a purple character who represents fear.
Capitol Retort: Inactive license, enemy of the people, mood hues
Junge says it refers to the next stage of the company's financial success and to customers' transitions from one stage of life to another and evolving financial needs.
Attracting and keeping bank customers: they offer give-aways, create catchy slogans and design special vehicles to promote their financial institutions
We see Junge, simply dressed, the sensible, grandmotherly figure posed in front of her library.
Great dictation: Norman Kleeblatt on Blind Spot: Hitler's Secretary. (Film)
Next fiscal year, Junge plans to expand cooperation with Latvia's largest retail chains, look for higher-quality and more competitive ingredients, develop new products, with the emphasis on automation, as well as to open one or two new units with the aim to increase revenue from wholesale and retail operations.
Junge bakery raises turnover 6.9% in 2018
Reichgott Junge: I see some of the Republican senators climbing onboard.
Capitol Retort: Get 'er done, felon voting, Bambi-oozled
He's a close friend, from the Junge Union, of Jens Spahn," David McAllister, a member of the CDU's executive committee, told Reuters.
Merkel protege seeks to unite German CDU after divisive leadership battle
Under the terms of the agreement, the BGC subsidiary will acquire 100 percent of Ed which includes broking operations under the Ed brand in UK, Singapore, Hong Kong, Dubai, Miami and China, as well as its German marine broking arm, Junge.
New Owners But Still 'Ed': BGC Partners Buying UK Broker Ed
Under the terms of the agreement, BGC will acquire 100% of Ed, which includes broking operations under the Ed brand in UK, Singapore, Hong Kong, Dubai, Miami and China; Ed's German marine broking arm Junge & Co., Ed's managing general agent operations Globe Underwriting Limited and Cooper Gay based in Paris.
BGC Partners to acquire Ed Broking Group
Junge: "Where's dad?" Mutter: "Oh, he was taken away by the Stasi.
Beeb are bunch of smugs as they see champs exit
"Ive been a member here ever since the church was formed in the 1970s and this cookie sale has been very popular since its inception," Carol Junge said.
Our Redeemer's sweet fundraiser