[im″u-no-glob´u-lin]
a protein of animal origin with known antibody activity. Immunoglobulins are major components of what is called the humoral immune response system. They are synthesized by lymphocytes and plasma cells and found in the serum and in other body fluids and tissues, including the urine, spinal fluid, lymph nodes, and spleen. (See also immunity.) Each immunoglobulin molecule consists of four polypeptide chains: two heavy chains (H chains) and two light chains (L chains). There are five antigenically different kinds of H chains, and this difference is the basis for the classification of immunoglobulins. The five major classes of immunoglobulins (Ig) are IgA, IgD, IgE, IgG, and IgM. (See accompanying figure.) Each class varies in its chemical structure and in its number of antigen-binding sites and adheres to and reacts only with the specific antigen for which it was produced.

Two types of IgA have been identified. They are serum IgA and secretory IgA (sIgA). In sIgA two IgA molecules are linked by a polypeptide called the secretory piece and by a J chain. Secretory IgA is present in nonvascular fluids, such as saliva, bile, synovial fluid, and intestinal and respiratory tract secretions. Both IgA types are known to have antiviral properties; their production is stimulated by oral vaccines and aerosol immunizations.

IgD is found in trace quantities in the serum (about 3 mg/dl). It serves as a B lymphocyte surface receptor.

IgE is called the reaginic antibody and is generally present in increased levels in persons with allergy. Its normal mean serum concentration is 0.03 mg/dl. When IgE attaches itself to cells within the body, such as those of the mucous membrane or skin, the cells become sensitized to allergens, causing them to release histamine and histamine-like substances when they come in contact with the allergen. Such allergic reactions as hives, hay fever, asthma, and anaphylactic shock are manifestations of IgE-mediated reactions.

IgG is the most abundant of the five classes of immunoglobulins. Its normal mean serum concentration is 1240 mg/dl. It is the major antibody in the secondary humoral response of immunity, serves to activate the complement system, and is frequently involved in opsonization. IgG is the only immunoglobulin that can cross the placental barrier.

IgM is principally concerned with the primary antibody response, appearing soon after initial invasion by an antigen and capable of destroying the antigen when it is first introduced. Its normal mean serum concentration is 120 mg/dl. Like IgG, IgM activates the complement system and together these two classes of immunoglobulins serve as specific antitoxins against the toxins of diphtheria, tetanus, botulism, and anthrax microorganisms, and snake venoms. 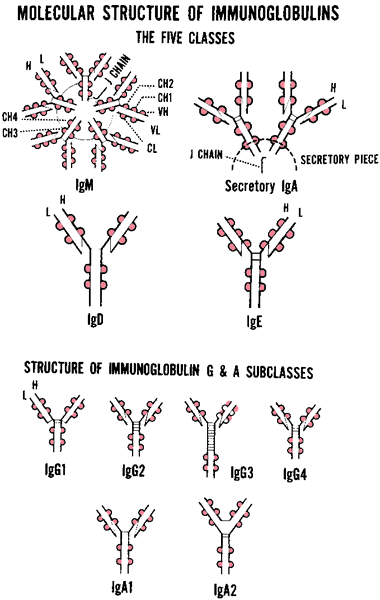 Schematic representation of the basic four-polypeptide chain, monomeric unit structure of immunoglobulin molecules. Heavy (H) chains determine class. Those in IgG are gamma, in IgM are mu, in IgA are alpha, in IgD are delta, and in IgE are epsilon. The two types of light (L) chains (kappa and lambda) are shared in common by all five immunoglobulin classes, although only one type is present in any individual molecule. Both heavy and light chains have looped structures referred to as domains or regions. Heavy chains possess one variable (VH) (wherein the antigen-binding site resides) and three constant (CH1, CH2, CH3) regions, with the exception of IgM and IgE which contain one variable (VH) and four constant regions (CH1, CH2, CH3, CH4). Light chains contain one variable (VL) and one constant (CL) region each. The heavy and light chains are fastened together by disulfide bonds as well as covalent forces. The disulfide bonds differ in number at the hinge (inter H chain) region according to immunoglobulin subclass. Antigen-binding sites are located in the variable (aminoterminus) regions of each immunoglobulin monomer. IgM and dimeric or multimeric IgA molecules have J chains which are associated with the ability of these molecules to form polymers. Secretory IgA contains a secretory piece made by epithelial cells and believed to protect the molecule from enzymatic cleavage in the hinge region. Serum IgA2 has no heavy to light chain disulfide bonds, whereas IgA1 has a classic structure.
Miller-Keane Encyclopedia and Dictionary of Medicine, Nursing, and Allied Health, Seventh Edition. © 2003 by Saunders, an imprint of Elsevier, Inc. All rights reserved.

(im'yū-nō-glob'yū-lin),
One of a class of structurally related proteins, each consisting of two pairs of polypeptide chains, one pair of light (L) low molecular weight chains (κ or λ), and one pair of heavy (H) chains (γ, α, μ, δ, and ε), usually all four linked by disulfide bonds. On the basis of the structural and antigenic properties of the H chains, immunoglobulins are classified (in order of relative amounts present in normal human serum) as IgG (7S in size, 80%), IgA (10-15%), IgM (19S, a pentamer of the basic unit, 5-10%), IgD (less than 0.1%), and IgE (less than 0.01%). All of these classes are homogeneous and susceptible to amino acid sequence analysis. Each class of H chain can associate with either κ or λ L chains. Subclasses of immunoglobulin, based on differences in the H chains, are referred to as IgG1, etc.
When split by papain, IgG yields three pieces: the Fc piece, consisting of the C-terminal portion of the H chains, with no antibody activity but capable of fixing complement, and crystallizable; and two identical Fab pieces, carrying the antigen-binding sites and each consisting of an L chain bound to the remainder of an H chain.
Antibodies are immunoglobulins, and all immunoglobulins probably function as antibodies. However, immunoglobulin refers not only to the usual antibodies, but also to a great number of pathologic proteins classified as myeloma proteins, which appear in multiple myeloma along with Bence Jones proteins, myeloma globulins, and immunoglobulin fragments.
From the amino acid sequences of Bence Jones proteins, it is known that all L chains are divided into a region of variable sequence (VL) and one of constant sequence (CL), each comprising about half the length of the L chain. The constant regions of all human L chains of the same type (κ or λ) are identical except for a single amino acid substitution, under genetic controls. H chains are similarly divided, although the VH region, although similar in length to the VL region, is only one third or one fourth the length of the CH region. Binding sites are a combination of VL and VH protein regions. The large number of possible combinations of L and H chains make up the "libraries" of antibodies of each individual.
Farlex Partner Medical Dictionary © Farlex 2012

(ĭm′yə-nō-glŏb′yə-lĭn, ĭ-myo͞o′-)
n. Abbr. Ig
Any of a group of large glycoproteins that are secreted by plasma cells and that function as antibodies in the immune response by binding with specific antigens. There are five classes of immunoglobulins: IgA, IgD, IgE, IgG, and IgM.
The American Heritage® Medical Dictionary Copyright © 2007, 2004 by Houghton Mifflin Company. Published by Houghton Mifflin Company. All rights reserved.

A highly-specific molecule of the immune system, produced by mature B cells in response to an antigen Structure 2 identical light-L, 2 identical heavy–H chains; the L and H chains have constant and variable regions, the variable regions are critical for antigen recognition and binding; immunoglobulin production requires prior rearrangement of the variable, diversity and joining gene segments, that form part of a potential repertoire of 1010-1012 antibodies that may be encoded in response to a molecule's surface binding site or epitope Types Idiotype–evoked by a particular epitope; isotype–Ig subtype–IgG, IgA, IgM, IgD, IgE that all normal persons have; allotype–a subtype shared by population groups–eg, with racial differences. See Hinge, Polyclonal immunoglobulin, Protein electrophoresis, Sporidin-G™ Bovine immunoglobulin.
McGraw-Hill Concise Dictionary of Modern Medicine. © 2002 by The McGraw-Hill Companies, Inc.

a protein (such as gamma globulin) made in B-CELLS that possesses ANTIBODY activity and is made up of four POLYPEPTIDE CHAINS, two identical light (L) chains and two identical heavy (H) chains joined by DISULPHIDE BRIDGES to form a Y-shaped macromolecule. The H chains are connected by two or more disulphide bridges at the hinge region of the Y. One 1 chain runs beside each of the two limbs of the Y, attached by a disulphide bridge. There are five main classes of human immunoglobins, differentiated principally by their heavy chains:

Only a few of these amino acids actually contact the antigen and this contact region is called the complementarity determining region (CDR). For the genetics of immunoglobulin production see C-GENE, D-GENE, J-GENE and V-GENE.

A protein molecule formed by mature B cells in response to foreign proteins in the body. There are five types of immunoglobulins, but the major one is gamma globulin or immunoglobulin G.
Mentioned in: Ataxia-Telangiectasia, Dermatomyositis, Graft-vs.-Host Disease, Legionnaires' Disease, Multiple Myeloma, Transfusion, Waldenström's Macroglobulinemia, X-Linked Agammaglobulinemia
Gale Encyclopedia of Medicine. Copyright 2008 The Gale Group, Inc. All rights reserved.

(im'yū-nō-glob'yū-lin)
One of a class of structurally related proteins. On the basis of the structural and antigenic properties of the H chains, immunoglobulins are classified (in order of relative amounts present in normal human serum) as IgG, IgA, IgM, IgD, and IgE.
Medical Dictionary for the Dental Professions © Farlex 2012

Feedback
Flashcards & Bookmarks ?
Please log in or register to use Flashcards and Bookmarks. You can also log in with
Flashcards ?
My bookmarks ?
+ Add current page to bookmarks
Mentioned in ?
References in periodicals archive ?
Immunologic and functional evidence for anti-Siglec-9 autoantibodies in intravenous immunoglobulin preparations.
Use of intravenous immunoglobulin in pediatric practice
Additionally, factors such as growing population and geriatric populace worldwide are fostering the Intravenous Immunoglobulin Market growth.
Intravenous Immunoglobulin (IVIg) with Top Companies Overview, Current Trends, Growth Key Drivers, Investment Feasibility, Enhancements and Global Development till 2023
However, under this current practice, many RhD-negative women are receiving anti-D immunoglobulin unnecessarily.
A new protocol for RhD-negative pregnant women? Can cell-free DNA testing reduce unnecessary use of anti-D immunoglobulin in RhD-negative women and still prevent harm to their RhD-positive infants?
She is currently receiving immunoglobulin replacement therapy.
Hypogammaglobulinemia Observed One Year after Rituximab Treatment for Idiopathic Thrombocytopenic Purpura
reported a case of immunoglobulin deposition disease with a membranous pattern.
A Case of Proliferative Glomerulonephritis with Monoclonal IgG Deposits That Showed Predominantly Membranous Features
Global Intravenous and Subcutaneous Immunoglobulin Demand (2010-2015E)
Global Blood Plasma Market Report: 2016 Edition - New Report by Koncept Analytics
Material and Methods: The demographic findings, clinical and laboratory findings, subcutaneous immunoglobulin dosage and dose frequency, infusion time, area and methods, adverse events and frequency of infections were obtained from patient files and recorded.
Use of subcutaneous immunoglobulin in primary immune deficiencies
While immunoglobulin G (IgG) biologicals are large molecules, there is no doubt that they cross the placenta through specific transport systems with a long half life in infants, creating potential risks for immunocompromise in early life.
Biologic treatment in pregnancy
Immunoglobulin abnormalities were among the most common immune abnormalities observed in children with autism.
SERUM IMMUNOGLOBULINS AND CRP LEVELS IN AUTISTIC CHILDREN
If the mother is RHD negative, she'll be offered injections of anti-D immunoglobulin at certain points in her pregnancy when she may be exposed to the baby's red blood cells.
Rhesus disease; 2 MINUTES ON..
"Due to out of specification (OOS) findings on the product stability prior to the expiration date, specific batches of Rabbit Anti-Human Thymocyte Immunoglobulin (Thymoglobuline) 5mg/mL Powder for Solution for IV Infusion has been voluntarily recalled," the FDA said.
Transplant medicine recalled
Immunoglobulin G, IgG1, IgG2, IgG3, IgG4 were evaluated.
Characterisation of up-regulated immunoglobulins in patients with chronic rhinosinusitis