[hi″po-spa´de-as]
a developmental anomaly in which the urethra opens inferior to its normal position, usually in males with the opening on the underside of the penis or on the perineum. In perineal hypospadias the opening on the perineum is accompanied by severe deformity of the penis and testes so that the individual has male pseudohermaphroditism. 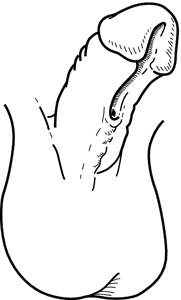 Hypospadias with chordee. From Dorland's, 2000.
female hypospadias a developmental anomaly in the female in which the urethra opens into the vagina.
Miller-Keane Encyclopedia and Dictionary of Medicine, Nursing, and Allied Health, Seventh Edition. © 2003 by Saunders, an imprint of Elsevier, Inc. All rights reserved.

(hī'pō-spā'dē-ăs), [MIM*146450]
A developmental anomaly characterized by a defect on the ventral surface of the penis so that the urethral meatus is proximal to its normal location; may be associated with chordee; also a similar defect in the female, in which the urethra opens into the vagina. Compare: epispadias.
Synonym(s): urogenital sinus anomaly
[hypo- + G. spaō, to tear or gouge]
Farlex Partner Medical Dictionary © Farlex 2012

Pediatric urology A congenital defect in the positioning of the urethral meatus on the penis or vagina Types Mild male hypospadias–opening is slightly displaced below the tip of the penis; severe male hypospadias, opening is in the female position at the base of the scrotum; the penis has an open gutter under the penis; the penis may be small. See Epispadia, Micropenis/microphallus.
McGraw-Hill Concise Dictionary of Modern Medicine. © 2002 by The McGraw-Hill Companies, Inc.

(hī'pō-spā'dē-ăs)
A developmental anomaly characterized by a defect on the ventral surface of the penis so that the urethral meatus (urethral opening) is more proximal than normal; may be associated with chordee; also, a similar defect in the female in which the urethra opens into the vagina.
Compare: epispadias
Synonym(s): urogenital sinus anomaly.
[hypo- + G. spaō, to tear or gouge]
Medical Dictionary for the Health Professions and Nursing © Farlex 2012

A congenital abnormality of the penis in which the urine tube (URETHRA) opens on the underside of the organ, either at the neck of the bulb (glans) or further back. The prevalence of the condition has doubled in the last 30 years. Hypospadias causes inconvenience in urination and possible infertility, but surgical correction is possible. Tissue culture can be used to provide sheets of artificially grown natural material to line the extended portion of the urethra.
Collins Dictionary of Medicine © Robert M. Youngson 2004, 2005

A congenital deformity of the penis where the urinary tract opening is not at the tip of the glans.
Mentioned in: Circumcision
Gale Encyclopedia of Medicine. Copyright 2008 The Gale Group, Inc. All rights reserved.

Feedback
Flashcards & Bookmarks ?
Please log in or register to use Flashcards and Bookmarks. You can also log in with
Flashcards ?
My bookmarks ?
+ Add current page to bookmarks
Mentioned in ?
References in periodicals archive ?
What causes hypospadius? In most cases, we simply don't know.
There were reports in recent decades that the incidence of hypospadius seemed to be increasing, which led to speculation that mothers might be receiving toxic exposure to hormones or hormone-like substances in the environment.
If hypospadius is found, it is vital that a newborn circumcision not be attempted.
Decades ago, hypospadius repairs were often delayed until several years of age, but modern practice is to do the repair when the child is old enough to have had good penile growth (usually about 6 months of age), but not so old that care afterwards becomes more difficult or so old that the child will remember the surgery (usually not later than one-to-two years of age).
Urologist's notebook
Caudal tramadol for postoperative analgesia in paediatric hypospadius surgery.
Comparison of caudal epidural bupivacaine with bupivacaine plus tramadol and bupivacaine plus ketamine for postoperative analgesia in children