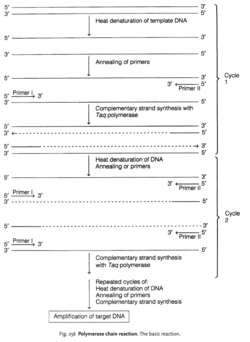 Feedback
Flashcards & Bookmarks ?
Please log in or register to use Flashcards and Bookmarks. You can also log in with
Flashcards ?
My bookmarks ?
+ Add current page to bookmarks
Mentioned in ?
References in periodicals archive ?
This step denatures the initial template into single-stranded DNA and activates hot-start polymerases.
Fast PCR: reduce run times and maximize throughput: Dr Viresh Patel, Senior Product Manager for amplification reagents at Bio-Rad laboratories, highlights methods that can minimize PCR recycling times while maximizing throughput
Real-time PCR conditions were a single hot-start cycle at 95[degrees]C for 30 s, followed by 55 cycles of denaturing at 94[degrees]C for 10 s, annealing at 58[degrees]C for 6 s (for Bartonella) or at 60[degrees]C for 6 sec (for the 4 Bartonella species), and final extension at 72[degrees]C for 10 s.
Bartonella henselae in porpoise blood
The combination of proprietary hot-start Sso7d fusion protein technology, optimized buffer and EvaGreen dye increases reliability and sensitivity.
Real-time PCR reagents speed up QPCR 25%