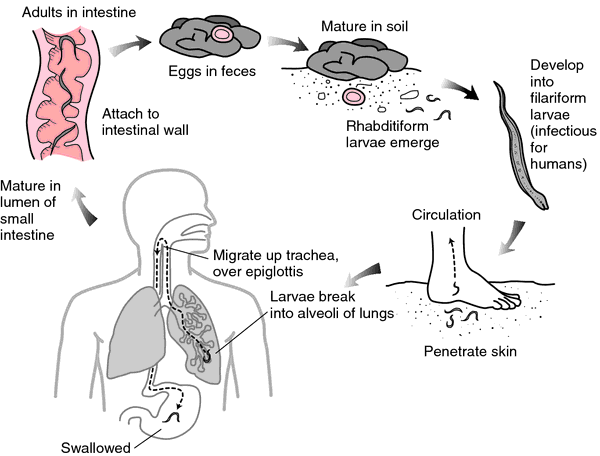 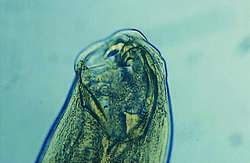 Feedback
Flashcards & Bookmarks ?
Please log in or register to use Flashcards and Bookmarks. You can also log in with
Flashcards ?
My bookmarks ?
+ Add current page to bookmarks
Mentioned in ?
References in periodicals archive ?
Baseline prevalence of hookworm infections in 1,839 US-bound Myanmar refugees at 3 camps along the Myanmar-Thailand border, by age group, Thailand, 2012-2015.
Hookworm infection affects >470 million persons worldwide (1).
Ancylostoma ceylanicum Hookworm in Myanmar Refugees, Thailand, 2012-2015
Hookworm infection in a healthy adult that manifested as severe eosinphilia and diarrhea.
Hookworm infection. N Engl J Med 2004; 351: 799-807.
Hookworm infestation as a cause of melena and severe anaemia in farmer
Jiraanankul V, Aphijirawat W, Mungthin M, Khositnithikul R, Rangsin R, Traub RJ, Piyaraj P, Naaglor T, Taamasri P, Leelayoova S (2011) Incidence and risk factors of hookworm infection in a rural community of central Thailand.
A case of intestinal parasitosis due to animal hookworm/ Un caso de parasitosis intestinal ocasionado por anquilostomideo de animales/ Um caso de parasitose intestinais ocasionado por ancylostomideo de animais
However, Sex preponderance was not seen with hookworm infection.
This finding suggests that ascariasis might be the disease of the urban and hookworm infection is the disease of rural area.
Soil-transmitted helminths in children with clinical symptoms of infection
Though wearing of shoes was not considered as a variable in the analysis, it can also contribute to high prevalence of hookworm infection [21].
"The hidden hunger": understanding the burden of anaemia and its determinants among pregnant and non-pregnant women in Ethiopia
Heavy hookworm infections consistently have been reported to be associated with anemia [9,10].
Palmar Pallor as an Indicator for Anthelminthic Treatment Among III Children Aged 2-4 Years -- Western Kenya, 1998
The corresponding standardized prevalences were 69.8%, 13.8%, and 0.5% for roundworm infections; 55.7%, 11.2%, and 1.4% for whipworm infections; and 24.3%, 6.3%, and 5.3% for hookworm infections.
Increasing prevalence and intensity of foodborne clonorchiasis, Hengxian County, China, 1989-2011
ceylanicum hookworm infections on human health, and a One Health approach should be adopted for the control of this zoonosis.
High Prevalence of Ancylostoma ceylanicum hookworm infections in humans, Cambodia, 2012
However, the overall warmer climate, including warmer winters, might have created the conditions for zoonotic hookworm infections in humans in western Europe (10).
Cutaneous larva migrans acquired in Brittany, France