Hirschsprung's disease, also known as congenital megacolon or aganglionic megacolon, is an abnormality in which certain nerve fibers are absent in segments of the bowel, resulting in severe bowel obstruction. It was first identified in 1886 by a physician named Harold Hirschsprung.

Hirschsprung's disease is caused when certain nerve cells (called parasympathetic ganglion cells) in the wall of the large intestine (colon) do not develop before birth. Without these nerves, the affected segment of the colon lacks the ability to relax and move bowel contents along. This causes a constriction and as a result, the bowel above the constricted area dilates due to stool becoming trapped, producing megacolon (dilation of the colon). The disease can affect varying lengths of bowel segment, most often involving the region around the rectum. In up to 10% of children, however, the entire colon and part of the small intestine are involved. This condition is known as total colonic aganglionosis, or TCA.
Hirschprung's disease occurs once in every 5,000 live births, and it is about four times more common in males than females. Between 4% and 50% of siblings are also afflicted. The wide range for recurrence is due to the fact that the recurrence risk depends on the gender of the affected individual in the family (i.e., if a female is affected, the recurrence risk is higher) and the length of the aganglionic segment of the colon (i.e., the longer the segment that is affected, the higher the recurrence risk).

Hirschsprung's disease occurs early in fetal development when, for unknown reasons, there is either failure of nerve cell development, failure of nerve cell migration, or arrest in nerve cell development in a segment of the bowel. The absence of these nerve fibers, which help control the movement of bowel contents, is what results in intestinal obstruction accompanied by other symptoms.
There is a genetic basis to Hirschsprung's disease, and it is believed that it may be caused by different genetic factors in different subsets of families. Proof that genetic factors contribute to Hirschprung's disease is that it is known to run in families, and it has been seen in association with some chromosome abnormalities. For example, about 10% of children with the disease have Down syndrome (the most common chromosomal abnormality). Molecular diagnostic techniques have identified many genes that cause susceptibility to Hirschprung's disease. As of the early 2000s, a total of six genes have been identified: the RET gene, the glial cell line-derived neurotrophic factor gene, the endothelin-B receptor gene, endothelin converting enzyme, the endothelin-3 gene, and the Sry-related transcription factor SOX10. Mutations that inactivate the RET gene are the most frequent, occurring in 50% of familial cases (cases which run in families) and 15-20% of sporadic (non-familial) cases. Mutations in these genes do not cause the disease, but they make the chance of developing it more likely. Mutations in other genes or environmental factors are required to develop the disease, and these other factors are not understood. As of 2004, at least three chromosomes are known to be involved: 13q22, 21q22, and 10q. Hirschsprung's disease has also been reported in association with abnormal forms of chromosome 18.
For persons with a ganglion growth beyond the sigmoid segment of the colon, the inheritance pattern is autosomal dominant with reduced penetrance (risk closer to 50%). For persons with smaller segments involved, the inheritance pattern is multifactorial (caused by an interaction of more than one gene and environmental factors, risk lower than 50%) or autosomal recessive (one disease gene inherited from each parent, risk closer to 25%) with low penetrance.
The initial symptom is usually severe, continuous constipation. A newborn may fail to pass meconium (the first stool) within 24 hours of birth, may repeatedly vomit yellow- or green-colored bile and may have a distended (swollen, uncomfortable) abdomen. Occasionally, infants may have only mild or intermittent constipation, often with diarrhea.
While two-thirds of cases are diagnosed in the first three months of life, Hirschsprung's disease may also be diagnosed later in infancy or childhood. Occasionally, even adults are diagnosed with a variation of the disease. In older infants, symptoms and signs may include anorexia (lack of appetite or inability to eat), lack of the urge to move the bowels or empty the rectum on physical examination, distended abdomen, and a mass in the colon that can be felt by the physician during examination. It should be suspected in older children with abnormal bowel habits, especially a history of constipation dating back to infancy and ribbon-like stools.
Occasionally, the presenting symptom may be a severe intestinal infection called enterocolitis, which is life-threatening. The symptoms are usually explosive, watery stools and fever in a very ill-appearing infant. It is important to diagnose the condition before the intestinal obstruction causes an overgrowth of bacteria that evolves into a medical emergency. Enterocolitis can lead to severe diarrhea and massive fluid loss, which can cause death from dehydration unless surgery is done immediately to relieve the obstruction.
Hirschsprung's disease sometimes occurs in children with other disorders of the autonomic nervous system, such as congenital central hypoventilation syndrome, a breathing disorder. Other syndromes associated with Hirschsprung disease include congenital deafness and Waardenburg syndrome, a genetic disorder characterized by facial abnormalities and the loss of normal pigmentation in the hair, skin, and the iris of the eye.

Hirschsprung's disease in the newborn must be distinguished from other causes of intestinal obstruction. The diagnosis is suspected by the child's medical history and physical examination, especially the rectal exam. The diagnosis is confirmed by a barium enema x ray, which shows a picture of the bowel. The x ray will indicate if a segment of bowel is constricted, causing dilation and obstruction. A biopsy of rectal tissue will reveal the absence of the nerve fibers. Adults may also undergo manometry, a balloon study (device used to enlarge the anus for the procedure) of internal anal sphincter pressure and relaxation.

Hirschsprung's disease is treated surgically. The goal is to remove the diseased, nonfunctioning segment of the bowel and restore bowel function. This is often done in two stages. The first stage relieves the intestinal obstruction by performing a colostomy. This is the creation of an opening in the abdomen (stoma) through which bowel contents can be discharged into a waste bag. When the child's weight, age, or condition is deemed appropriate, surgeons close the stoma, remove the diseased portion of bowel, and perform a "pull-through" procedure, which repairs the colon by connecting functional bowel to the anus. The pull-through operation usually establishes fairly normal bowel function.
Children with total colonic aganglionosis occasionally fail to benefit from a pull-through procedure. One option in treating these patients is the construction of an ileoanal S-pouch.
The surgeon may recommend a permanent ostomy if the child has Down syndrome in addition to Hirschsprung disease, as these children usually have more difficulty with bowel control.

Overall, prognosis is very good. Most infants with Hirschsprung's disease achieve good bowel control after surgery, but a small percentage of children may have lingering problems with soilage or constipation. These infants are also at higher risk for an overgrowth of bacteria in the intestines, including subsequent episodes of enterocolitis, and should be closely followed by a physician. Mortality from enterocolitis or surgical complications in infancy is 25-30%.

Hirschsprung's disease is a congenital abnormality that has no known means of prevention. It is important to diagnose the condition early in order to prevent the development of enterocolitis. Genetic counseling can be offered to a couple with a previous child with the disease or to an affected individual considering pregnancy to discuss recurrence risks and treatment options. Prenatal diagnosis is not available as of the early 2000s.

Anus — The opening at the end of the intestine that carries waste out of the body
Barium enema x ray — A procedure that involves the administration of barium into the intestines by a tube inserted into the rectum. Barium is a chalky substance that enhances the visualization of the gastrointestinal tract on x ray.
Colostomy — The creation of an artificial opening into the colon through the skin for the purpose of removing bodily waste. Colostomies are usually required because key portions of the intestine have been removed.
Enterocolitis — Severe inflammation of the intestines that affects the intestinal lining, muscle, nerves and blood vessels.
Manometry — A balloon study of internal anal sphincter pressure and relaxation.
Meconium — The first waste products to be discharged from the body in a newborn infant, usually greenish in color and consisting of mucus, bile and so forth.
Megacolon — Dilation of the colon.
Parasympathetic ganglion cell — Type of nerve cell normally found in the wall of the colon.

[hirsh´sproongz]
congenital absence of the parasympathetic nerve ganglia in the anorectum or proximal rectum, or in some cases the entire colon, resulting in the absence of peristalsis in the affected portion of the colon and a consequent massive enlargement of the colon, constipation, and obstruction. Severe cases may require surgery in early infancy; less severe cases can be treated with enemas and laxatives but surgery often is required eventually. A temporary colostomy is performed to relieve symptoms of bowel obstruction. Later, the aganglionic section of bowel is removed and the integrity of the intestine is restored. Called also aganglionic or congenital megacolon. 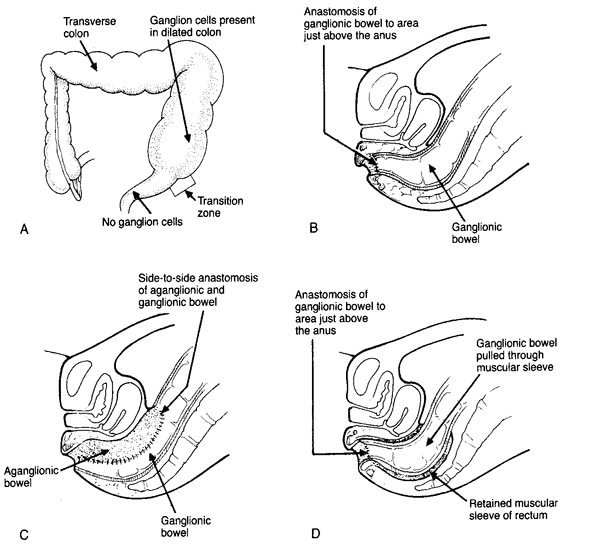 A condition of infant onset characterised by the absence of myenteric nerves in the distal colon, extending proximally from the anus for a variable distance. It affects an estimated 1:5000 live births, and is more common in males (male:female ratio, 4:1); up to 10% have Down syndrome.

Diagnosis
By rectal suction biopsy; must include submucosa, taken at least 2 cm above pectinate line.