[TA]
the right and left hip bones, joined anteriorly at the pubic symphysis and at the sacrum posteriorly, by which the appendicular skeleton of the free lower limbs is attached to the axial skeleton, which in so doing forms a bony ring.
Synonym(s): cingulum pelvici [TA], cingulum membri inferioris ☆
Farlex Partner Medical Dictionary © Farlex 2012

The part of the skeleton to which the lower extremities are attached. Cf Shoulder girdle.
McGraw-Hill Concise Dictionary of Modern Medicine. © 2002 by The McGraw-Hill Companies, Inc.

(pel'vik gĭr'dĕl) [TA]
The bony ring formed by the hip bones and the sacrum, to which the lower limbs are attached.
Medical Dictionary for the Health Professions and Nursing © Farlex 2012

The ring of bones at the lower end of the spine with which the legs articulate. Compare shoulder girdle. See also PELVIS.
Collins Dictionary of Medicine © Robert M. Youngson 2004, 2005 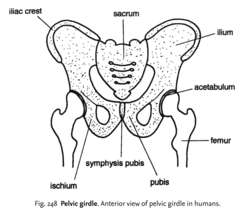 the skeletal support for the posterior limbs of vertebrates that transmits the power in locomotion from the hind limbs to the body.
Collins Dictionary of Biology, 3rd ed. © W. G. Hale, V. A. Saunders, J. P. Margham 2005

Feedback
Flashcards & Bookmarks ?
Please log in or register to use Flashcards and Bookmarks. You can also log in with
Flashcards ?
My bookmarks ?
+ Add current page to bookmarks
Mentioned in ?
References in periodicals archive ?
Polymyalgia rheumatica (PMR) This is characterized by aching and morning stiffness in the shoulders, hip girdle, and neck that gets better as the day goes on.
What's causing your joints to ache?
The muscles of the lower back and hip girdle will be overstretched, causing lower back pain.
DID YOU KNOW?
For example, having flexible hips will promote better pelvic alignment, and having stronger hip girdle muscles will "hold" one's posture better.
"My back is killing me"