(redirected from Hemoglobin a, glycosylated)

[he´mo-glo″bin]
the main functional constituent of the red blood cell, serving as the oxygen-carrying protein; it is a type of hemoprotein in which each molecule is a tetramer composed of four monomers held together by weak bonds. It consists of two pairs of polypeptide chains, the globins, each having an attached heme molecule composed of iron plus a protoporphyrin molecule. Symbol Hb.
Chemistry and Physiology.
The iron atom has a free valence and can bind one molecule of oxygen. Thus, each hemoglobin molecule can bind one molecule of oxygen. The binding of oxygen by one monomer increases the affinity for oxygen of the others in the tetramer. This makes hemoglobin a more efficient transport protein than a monomeric protein such as myoglobin.

Oxygenated hemoglobin (oxyhemoglobin) is bright red in color; hemoglobin unbound to oxygen (deoxyhemoglobin) is darker. This accounts for the bright red color of arterial blood, in which the hemoglobin is about 97 per cent saturated with oxygen. Venous blood is darker because it is only about 20 to 70 per cent saturated, depending on how much oxygen is being used by the tissues. The affinity of hemoglobin for carbon monoxide is 210 times as strong as its affinity for oxygen. The complex formed (carboxyhemoglobin) cannot transport oxygen. Thus, carbon monoxide poisoning results in hypoxia and asphyxiation.

As erythrocytes wear out or are damaged, they are ingested by macrophages of the reticuloendothelial system. The porphyrin ring of heme is converted to the bile pigment bilirubin, which is excreted by the liver. The iron is transported to the bone marrow to be incorporated in the hemoglobin of newly formed erythrocytes.

The hemoglobin concentration of blood varies with the hematocrit. The normal values for the blood hemoglobin concentration are 13.5 to 18.0 g/100 ml in males and 12.0 to 16.0 g/100 ml in females. The normal mean corpuscular hemoglobin concentration, which is the concentration within the red blood cells, is 32 to 36 g/100 ml.
Variant and Abnormal Hemoglobins. There are six different types of globin chains, designated by the Greek letters α, β, γ, δ, ε, and ζ. The composition of a hemoglobin is specified by a formula such as α2β2, which indicates a tetramer containing two α chains and two β chains. The chains are coded by different genes, which are turned on and off during development in order to produce hemoglobins with the oxygen-carrying properties required at each developmental stage. In the first three months of embryonic development, when blood cells are produced in the yolk sac, embryonic hemoglobins such as Hb Gower (α2Aε2) or Hb Portland (ζ2γ2) are produced. As erythropoiesis shifts to the liver and spleen, the fetal hemoglobin Hb F (α2γ2) appears. When erythropoiesis shifts to the bone marrow during the first year of life, the adult hemoglobins Hb A (α2β2) and Hb A2 (α2δ2) begin to be produced.

Many abnormal hemoglobins arising from mutations have been discovered. Some have altered oxygen affinity, some are unstable, and in some the iron atom is oxidized, resulting in congenital methemoglobinemia. Some mutations result in a reduced rate of hemoglobin synthesis. All such conditions are known as hemoglobinopathies.

The most common hemoglobinopathy is sickle cell disease, caused by a mutation replacing the sixth amino acid in the β chain, normally glutamic acid, by valine. The variant hemoglobin α2βS2 is known as Hb S. Mutations resulting in reduced synthesis of one of the chains are called thalassemias. They can result from deletion of the gene for a chain or from a mutation in the regulatory gene that controls the synthesis of the chain. 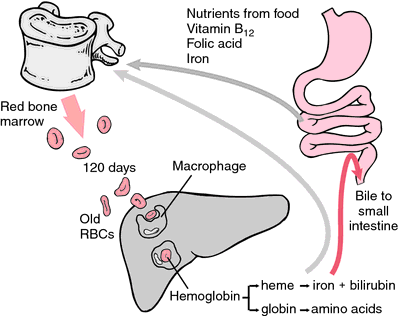 The life cycle of red blood cells and the breakdown of hemoglobin. From Polaski and Tatro, 1996.
hemoglobin A1c hemoglobin A with a glucose group attached to the amino terminal of the beta chain; it is made at a slow constant rate during the 120-day life span of the erythrocyte. It accounts for 3 to 6 per cent of the total hemoglobin in a normal person and up to 12 per cent in persons with diabetes mellitus. Increased levels correlate with glucose intolerance in diabetics; with good diabetic control its level returns to normal range, so that periodic assays can be helpful in evaluating effective control of diabetes.
glycated hemoglobin (glycosylated hemoglobin) any of various hemoglobins with glucose attached nonenzymatically; the most common one is hemoglobin A1c. The percentage of hemoglobin that is glycosylated can be assessed over a long period of time as a gauge of blood sugar control; the normal range for a nondiabetic person is between 4 and 6 per cent.
mean corpuscular hemoglobin (MCH) the average hemoglobin content of an erythrocyte, conventionally expressed in picograms per red cell, obtained by multiplying the blood hemoglobin concentration (in g/dl) by 10 and dividing by the red cell count (in millions per ml): MCH = Hb/RBC.
Miller-Keane Encyclopedia and Dictionary of Medicine, Nursing, and Allied Health, Seventh Edition. © 2003 by Saunders, an imprint of Elsevier, Inc. All rights reserved.

any one of four hemoglobin A fractions (AIa1, AIa2, AIb, or AIc) to which d-glucose and related monosaccharides are covalently linked; concentrations are increased in the erythrocytes of patients with diabetes mellitus, which can be used as a retrospective index of glucose control over time in such patients.
Synonym(s): glycated hemoglobin
Farlex Partner Medical Dictionary © Farlex 2012

(glī-kō'si-lāt-ĕd hē'mō-glō-bin)
Any one of four hemoglobin A fractions (AIa1, AIa2, AIb, or AIc) to which d-glucose and related monosaccharides bind; concentrations are increased in the erythrocytes of patients with diabetes mellitus and can be used as a retrospective index of glucose control over time in such patients.
Synonym(s): glycated hemoglobin.
Medical Dictionary for the Health Professions and Nursing © Farlex 2012

The iron-containing pigment of red blood cells (RBCs) that carries oxygen from the lungs to the tissues. The amount of hemoglobin in the blood averages 12 to 16 g/100 ml in women, 14 to 18 g/100 ml in men, and somewhat less in children. Hemoglobin is a crystallizable, conjugated protein consisting of heme and globin. In the lungs, 1 g of hemoglobin combines readily with 1.36 cc of oxygen by oxygenation to form oxyhemoglobin. In the tissues where oxygen concentration is low and carbon dioxide (CO2) concentration is high (low pH), hemoglobin releases its oxygen. Hemoglobin also acts as a buffer for the hydrogen ions produced in RBCs when (CO2) is converted to bicarbonate ions for transport in the plasma.

When old RBCs are phagocytized by macrophages in the liver, spleen, and red bone marrow, the iron of hemoglobin is reused immediately to produce new RBCs or is stored in the liver until needed. The globin is converted to amino acids for the synthesis of other proteins. The heme portion is of no further use and is converted to bilirubin.

Hemoglobin combines with carbon monoxide (in carbon monoxide poisoning) to form the stable compound carboxyhemoglobin, which renders hemoglobin unable to bond with oxygen and results in hypoxia of tissues. Oxidation of the ferrous iron of hemoglobin to the ferric state produces methemoglobin.

Hundreds of different types of hemoglobin have been discovered. See: blood 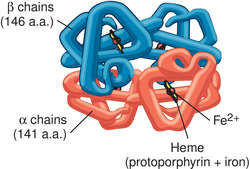 Abbreviation: Hb A1c
Hemoglobin A that contains a glucose group linked to the terminal amino acid of the beta chains of the molecule. Levels of hemoglobin A1c can be used to determine both the presence of diabetes mellitus (in previously undiagnosed patients) and the degree of glycemic control of known diabetics. The amount of glucose bound to the hemoglobin depends on the average concentration of glucose in the blood over time. In patients with diabetes mellitus, when the blood glucose level is optimally and carefully regulated over 8 to 12 weeks, the Hb A1c level is normal or slightly elevated. If the blood glucose level has not been controlled (and has been abnormally elevated) in the preceding 8 to 12 weeks, the Hb A1c blood level is increased. Hb A1c is a good indicator of long-term glycemic control. The blood test for it may be performed when the patient is not fasting. Synonym: glycohemoglobin; glycated hemoglobin; glycosylated hemoglobin

A hemoglobin molecule in which lysine is substituted for glutamic acid at the 26th position of the beta chain. This variation is found most often in those of Southeast Asian ancestry.

The type of hemoglobin found in the erythrocytes of the normal fetus. It has better oxygen-binding capacity than adult hemoglobin and is able to extract oxygen from the placenta to meet the needs of the fetus.

The induction of fetal hemoglobin (with drugs such as hydroxyurea) in patients with sickle cell anemia often improves their clinical status because fetal hemoglobin does not deform or “sickle” in the circulation. It is capable of taking up and giving off oxygen at lower oxygen tensions than the hemoglobin in adult erythrocytes.

A variant hemoglobin formed by an unequal crossover and fusion of the beta and delta genes. A single copy of the variant gene causes thalassemia minor. Homozygotes have thalassemia intermedia.

The hemoglobin content of the average RBC, usually expressed in picograms per red cell and calculated by multiplying the number of grams of hemoglobin/100 ml by 10 and dividing by the red cell count.
Synonym: mean corpuscular hemoglobin

Hemoglobin released from red blood cells when they are destroyed (lyzed). It circulates in the blood and extravascular tissues. Synonym: free plasma hemoglobin
Medical Dictionary, © 2009 Farlex and Partners

A test that measures the amount of hemoglobin bound to glucose. It is a measure of how much glucose has been in the blood during the past two to four months.
Mentioned in: Glycosylated Hemoglobin Test
Gale Encyclopedia of Medicine. Copyright 2008 The Gale Group, Inc. All rights reserved.