The Heimlich maneuver is an emergency procedure for removing a foreign object lodged in the airway that is preventing a person from breathing.

The Heimlich maneuver can be performed on all people. Modifications are necessary if the choking victim is very obese, pregnant, a child, or an infant.
Indications that a person's airway is blocked include:

Performing the heimlich maneuver on adults

To perform the Heimlich maneuver on a conscious adult, the rescuer stands behind the victim. The victim may either be sitting or standing. The rescuer makes a fist with one hand, and places it, thumb toward the victim, below the rib cage and above the waist. The rescuer encircles the victim's waist, placing his other hand on top of the fist.
In a series of 6-10 sharp and distinct thrusts upward and inward, the rescuer attempts to develop enough pressure to force the foreign object back up the trachea. If the maneuver fails, it is repeated. It is important not to give up if the first attempt fails. As the victim is deprived of oxygen, the muscles of the trachea relax slightly. Because of this loosening, it is possible that the foreign object may be expelled on a second or third attempt.
If the victim is unconscious, the rescuer should lay him or her on the floor, bend the chin forward, make sure the tongue is not blocking the airway, and feel in the mouth for foreign objects, being careful not to push any farther into the airway. The rescuer kneels astride the victim's thighs and places his fists between the bottom of the victim's breastbone and the navel. The rescuer then executes a series of 6-10 sharp compressions by pushing inward and upward.
After the abdominal thrusts, the rescuer repeats the process of lifting the chin, moving the tongue, feeling for and possibly removing the foreign material. If the airway is not clear, the rescuer repeats the abdominal thrusts as often as necessary. If the foreign object has been removed, but the victim is not breathing, the rescuer starts CPR.

To perform the Heimlich maneuver on a conscious adult (as illustrated above), the rescuer stands behind the victim and encircles his waist. The rescuer makes a fist with one hand and places the other hand on top, positioned below the rib cage and above the waist. The rescuer then applies pressure by a series of upward and inward thrusts to force the foreign object back up the victim's trachea.
(Illustration by Electronic Illustrators Group.)

OBVIOUSLY PREGNANT AND VERY OBESE PEOPLE. The main difference in performing the Heimlich maneuver on this group of people is in the placement of the fists. Instead of using abdominal thrusts, chest thrusts are used. The fists are placed against the middle of the breastbone, and the motion of the chest thrust is in and downward, rather than upward. If the victim is unconscious, the chest thrusts are similar to those used in CPR.
CHILDREN. The technique in children over one year of age is the same as in adults, except that the amount of force used is less than that used with adults in order to avoid damaging the child's ribs, breastbone, and internal organs.
INFANTS UNDER ONE YEAR OLD. The rescuer sits down and lays the infant along his or her forearm with the infant's face pointed toward the floor. The rescuer's hand supports the infant's head, and his or her forearm rests on his or her own thigh for additional support. Using the heel of the other hand, the rescuer administers four or five rapid blows to the infant's back between the shoulder blades.
After administering the back blows, the rescuer sandwiches the infant between his or her arms, and turns the infant over so that the infant is lying face up supported by the opposite arm. Using the free hand, the rescuer places the index and middle finger on the center of the breastbone and makes four sharp chest thrusts. This series of back blows and chest thrusts is alternated until the foreign object is expelled.
SELF-ADMINISTRATION OF THE HEIMLICH MANEUVER. To apply the Heimlich maneuver to oneself, one should make a fist with one hand and place it in the middle of the body at a spot above the navel and below the breastbone, then grasp the fist with the other hand and push sharply inward and upward. If this fails, the victim should press the upper abdomen over the back of a chair, edge of a table, porch railing or something similar, and thrust up and inward until the object is dislodged.

Any lay person can be trained to perform the Heimlich maneuver. Knowing how may save someone's life. Before doing the maneuver, it is important to determine if the airway is completely blocked. If the person choking can talk or cry, Heimlich maneuver is not appropriate. If the airway is not completely blocked, the choking victim should be allowed to try to cough up the foreign object on his or her own.

Many people vomit after being treated with the Heimlich maneuver. Depending on the length and severity of the choking episode, the choking victim may need to be taken to a hospital emergency room.

Incorrectly applied, the Heimlich maneuver can break bones or damage internal organs. In infants, the rescuer should never attempt to sweep the baby's mouth without looking to remove foreign material. This is likely to push the material farther down the trachea. 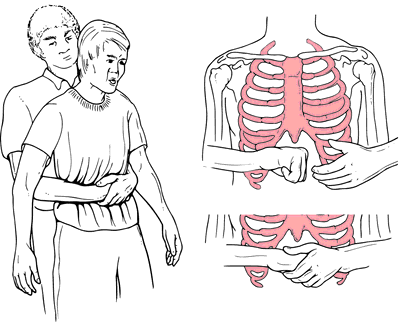 (hīm'lik),
an action designed to expel an obstructing bolus of food from the throat by placing a fist on the abdomen between the navel and the costal margin, grasping the fist from behind with the other hand, and forcefully thrusting it inward and upward to force the diaphragm upward, forcing air up the trachea to dislodge the obstruction.

(hīm′lĭk′, -lĭKH′)
n.
An emergency technique used to eject an object, such as food, from the trachea of a choking person. The technique employs a firm upward thrust just below the rib cage to force air from the lungs, thereby dislodging the obstruction.
A technique for removing a bolus of food stuck in the oropharynx potentially causing acute asphyxia
Technique The practictioner stands behind the victim and clasps his/her hands around the victim, slightly above the umbilicus, and abruptly pulls backwards, forcing residual air in the lungs out the trachea
Complication Fatal aortic regurgitation

(hīm'lik mă-nū'vĕr)
A procedure to expel an obstructing bolus of food from the throat by placing a fist on the abdomen between the navel and the costal margin, grasping the fist with the other hand, and thrusting it inward and upward so as to drive the diaphragm upward, forcing air up the trachea to dislodge the obstruction. 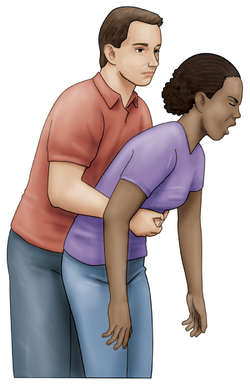 HEIMLICH MANEUVER: (for removal of a foreign body blocking the airway)

A technique for removing a foreign body, such as a food bolus, from the throat, trachea, or pharynx of a choking victim, where it is preventing air flow to and from the lungs. Synonym: abdominal thrust maneuver.

For a conscious victim, the maneuver consists of the rescuer applying subdiaphragmatic pressure by wrapping his or her arms around the victim's waist from behind, making a fist with one hand, placing it against the patient's abdomen between the navel and the rib cage, and then clasping the fist with the free hand and pressing in with a quick, forceful upward thrust. This procedure should be repeated several times if necessary. If one is alone and experiences airway obstruction caused by a foreign body, this technique may be self-applied.

For the unconscious victim, starting CPR is now the recommended procedure because chest compressions are often effective for removing a foreign body. It is a simple method that can be taught to the general public.

When the patient is a child and can speak, breathe, or cough, the maneuver is unnecessary. If the maneuver is done, it should be applied as gently as possible but still forcibly enough to dislodge the obstruction (the abdominal viscera of children are more easily damaged than those of adults).

This treatment is quite effective in dislodging the obstruction by forcing air against the mass, much as pressure from a carbonated beverage forcibly removes a cork or cap from a bottle. The average air flow produced is 225 L/min.

The Heimlich maneuver should not be performed unless complete airway obstruction is present. If the patient can cough, this maneuver should not be performed. In infants, extremely obese patients, and obviously pregnant patients, chest thrusts are used instead of abdominal thrusts to facilitate removal of the obstruction. See: illustration; choking
See also: Heimlich, Henry Jay

(hīm'lik mă-nū'vĕr)
Action designed to expel an obstructing bolus of food from the throat by placing a fist on the abdomen between navel and costal margin, grasping fist from behind with other hand, and forcefully thrusting it inward and upward to force the diaphragm upward, thus forcing air up the trachea to dislodge obstruction.

Feedback
Flashcards & Bookmarks ?
Please log in or register to use Flashcards and Bookmarks. You can also log in with
Flashcards ?
My bookmarks ?
+ Add current page to bookmarks
TheFreeDictionary presents:
Write what you mean clearly and correctly.
Mentioned in ?
References in periodicals archive ?
By self-application of the Heimlich maneuver, the patient can get rid of this air and secretions, thereby acquiring more "breathing room." To do so, they make a fist with one hand and put it just above the bellybutton and below the rib cage.
Saving a life on Mount Everest with the Heimlich maneuver
It's important to be familiar with CPR (Cardiopulmonary Resuscitation), the Heimlich maneuver, and Automated External Defibrillators so if an emergency arises, you can be prepared.
You Can Save a Life!
Heimlich therefore recommends careful study of the various means of administering the Heimlich maneuver and imprinting them in our minds before being called upon to carry out the procedure.
There really is a Dr. Heimlich
Lentz saved Mays life by performing the Heimlich maneuver after the nursing home resident choked on turkey on Thanksgiving.
Officer saves nursing home resident Saves: 'Heroic actions' will define officer's career, Elgin chief says
One of my friends, Margaret Benoit, stepped in without hesitation to perform the Heimlich maneuver and courageously saved this woman's life.
Timely action saved a life
Notice, the term "Heimlich maneuver," has not been used here, even though that's what Asper would call what he'd just done.
It's a life-saver
The young man is also a member of the ROTC, where he learned to perform the Heimlich maneuver. The training proved to be a true lifesaver on April 5, when Rene was walking home from track practice and noticed a little boy choking on a lollipop.
Teenager saves toddler
Corey had just saved Kevin's life using the Heimlich maneuver (HIME-lick man-OO-ver), which uses air from the choking person's own lungs to knock loose whatever they are choking on.
Squeeze play saved her friend life using the Heimlich maneuver
Lieutenant Mance moved immediately to the booth, lifted the victim from her seat, and began to administer the Heimlich maneuver. Fearful of breaking the elderly woman's ribs, Lieutenant Mance made two unsuccessful attempts to dislodge the food stuck in her throat.
Lieutenant Ben Mance
One of the things they had learned was the Heimlich maneuver.
Kids to the rescue
If this falls, follow with five abdominal thrusts (the Heimlich maneuver) for a child older than one year of age who is sitting or standing.
Choking, car windows, and light switches
CINCINNATI -- The Cincinnati surgeon who wrote the book on saving choking victims through his namesake Heimlich maneuver has now penned a new book: his memoir.
Heimlich maneuver namesake pens memoir