Hairy cell leukemia is a disease in which a type of white blood cell called the lymphocyte, present in the blood and bone marrow, becomes malignant and proliferates. It is called hairy cell leukemia because the cells have tiny hair-like projections when viewed under the microscope.

Hairy cell leukemia (HCL) is a rare cancer. It was first described in 1958 as leukemic reticuloendotheliosis, erroneously referring to a red blood cell because researchers were unsure of the cell of origin. It became more easily identifiable in the 1970s. There are approximately 600 new cases diagnosed every year in the United States, making up about 2% of the adult cases of leukemia each year.
HCL is found in cells located in the blood. There are three types of cells found in the blood: the red blood cells that carry oxygen to all the parts of the body; the white blood cells that are responsible for fighting infection and protecting the body from diseases; and the platelets that help in the clotting of blood. Hairy cell leukemia affects a type of white blood cell called the lymphocyte. Lymphocytes are made in the bone marrow, spleen, lymph nodes, and other organs. It specifically affects B-lymphocytes, which mature in the bone marrow. However, extremely rare variants of HCL have been discovered developing from T-lymphocytes, which mature in the thymus.
When hairy cell leukemia develops, the white blood cells become abnormal both in the way they appear (by acquiring hairy projections) and in the way they act (by proliferating without the normal control mechanisms). Further, the cells tend to accumulate in the spleen, causing it to become enlarged. The cells may also collect in the bone marrow and prevent it from producing normal blood cells. As a result, there may not be enough normal white blood cells in the blood to fight infection.
The median age at which people develop HCL is 52 years. Though it occurs in all ages, HCL more commonly develops in the older population. Men are four times more likely to develop HCL than women. There have been reports of familial aggregation of disease, with higher occurrences in Ashkenazi Jewish men. A potential genetic link is undergoing further investigation.

The cause of hairy cell leukemia is not specifically known. However, exposure to radiation is a known cause of leukemia in general. Familial involvement is another theory, suggesting that there is a genetic component associated with this disease.
HCL is a chronic (slowly progressing) disease, and the patients may not show any symptoms for many years. As the disease advances, the patients may suffer from one or more of the following symptoms:
Pain and discomfort are caused by an enlarged spleen, which results from the accumulation of the abnormal hairy cells in the spleen. Blood tests may show abnormal counts of all the different types of cells. This happens because the cancerous cells invade the bone marrow as well and prevent it from producing normal blood cells. Because of the low white cell count in the blood, the patient may have frequent infections. Fever often accompanies the infections. The patient is most susceptible to bacterial infections, but infections of any kind are the major cause of death. The low red cell count may cause anemia, fatigue, and weakness, and the low platelet count may cause the person to bruise and bleed easily.

When a patient suffers from the above symptoms, the doctor will palpate the abdomen and may order scans to see if the spleen is enlarged (splenomegaly). An enlarged spleen is present in 80% of patients. An enlarged liver is less common, but can occur.
If the spleen is enlarged, the doctor may order several blood tests. In these tests, the total numbers of each of the different types of blood cells (CBC) are reported. Sixty to eighty percent of patients suffer from pancytopenia, which is a dramatic reduction in the number of red blood cells, white blood cells, and platelets circulating in the blood.
If the blood tests are abnormal, the doctor may order a bone marrow aspiration and biopsy. In order to establish a diagnosis, hairy cells must be present in the bone marrow.

When physicians perform blood tests, they will determine the level of hemoglobin (the oxygen-transporting molecule of red blood cells). Serum hemoglobin levels and the size of the spleen, which can be measured on exam and by using an x ray, are proposed criteria for determining the stage of HCL. The following are the three proposed stages and their criteria:
Since there is generally no accepted staging system, another method for evaluating the progression of HCL is to group patients into two categories: untreated HCL and progressive HCL, in which hairy cells are present after therapy has been administered.
Some people with hairy cell leukemia have very few or no symptoms at all, and it is reasonable to expect that 10% of patients may not need any treatment. However, if the patient is symptomatic and needs intervention, HCL is especially responsive to treatment.
There are three main courses of treatment: chemotherapy, splenectomy (surgical removal of the spleen), and immunotherapy. Once a patient meets treatment criteria, purine analogues, particularly the drugs, pentostatin and cladribine, are the first-line therapy. Pentostatin is administered at 5mg/m2 for two days every other week until total remission is achieved. Patients may experience side effects such as fever, nausea, vomiting, photosensitivity, and keratoconjuctivitis. However, follow-up studies estimate a relapse-free survival rate at 76%. Cladribine (2-CdA) taken at 0.1mg/kg/day for seven days also has an impressive response. Eighty-six percent of patients experience complete remission after treatment, while 16% experience partial remission. Fever is the principal side effect of 2-CdA.
Biological therapy or immunotherapy, where the body's own immune cells are used to fight cancer, is also being investigated in clinical trials for hairy cell leukemia. A substance called interferon that is produced by the white blood cells of the body was the first systemic treatment that showed consistent results in fighting HCL. The FDA approved interferon-alpha (INF-alpha) to fight HCL. The mechanism by which INF-alpha works is not clearly understood. However, it is known that interferon stimulates the body's natural killer cells that are suppressed during HCL. The standard dosage is 2 MU/m2 three times a week for 12 months. Side effects include fever, myalgia, malaise, rashes, and gastrointestinal complaints.
If the spleen is enlarged, it may be removed in a surgical procedure known as splenectomy. This usually causes a remission of the disease. However, 50% of patients that undergo splenectomy require some type of systemic treatment such as chemotherapy or immunotherapy. Splenectomy is not the most widely used course of treatment as it was many years ago. Although the spleen is not an indispensable organ, it is responsible for helping the body fight infection. Therefore, other therapies are preferred in order to salvage the spleen and its functions.
Most patients have excellent prognosis and can expect to live 10 years or longer. The disease may remain silent for years with treatment. Continual follow-up is necessary to monitor the patient for relapse and determine true cure rates.

Many individuals choose to supplement traditional therapy with complementary methods. Often, these methods improve the tolerance of side effects and symptoms as well as enrich the quality of life. The American Cancer Society recommends that patients talk to their doctor to ensure that the methods they are using are safely supplementing traditional therapy. Some complementary treatments include the following:

Since the cause for the disease is unknown and there are no specific risk factors, there is no known prevention.

Anemia — A condition in which there is low iron in the blood due to a deficiency of red blood cells.
Bone marrow — The spongy tissue inside the large bones in the body that is responsible for making the red blood cells, white blood cells, and platelets.
Bone marrow aspiration and biopsy — A procedure in which a needle is inserted into the large bones of the hip or spine and a small piece of marrow is removed for microscopic examination.
Immunotherapy — A mode of cancer treatment in which the immune system is stimulated to fight the cancer.
Keratoconjunctivitis — Inflammation of the conjunctiva and cornea of the eye.
Leukemia — A disease in which the cells that constitute the blood become cancerous or abnormal.
Lymph nodes — Oval-shaped organs that are the size of peas, located throughout the body, and contain clusters of cells called lymphocytes. They filter out and destroy the bacteria, foreign particles, and cancerous cells from the blood.
Malignant — Cells that have the ability to invade locally, cause destruction of surrounding tissue, and travel to other sites in the body.
Spleen — An organ that lies next to the stomach. Its function is to remove the worn-out blood cells and foreign materials from the blood stream.
Splenectomy — A surgical procedure that involves the surgical removal of the spleen.

[loo-ke´me-ah]
a progressive, malignant neoplasm of the blood-forming organs, marked by diffuse replacement of the bone marrow development of leukocytes and their precursors in the blood and bone marrow. It is accompanied by a reduced number of erythrocytes and blood platelets, resulting in anemia and increased susceptibility to infection and hemorrhage. Other typical symptoms include fever, pain in the joints and bones, and swelling of the lymph nodes, spleen, and liver. adj., adj leuke´mic.
Types of Leukemia. Leukemia is classified clinically in several ways: (1) acute versus chronic, terms that have become altered from their usual meanings and refer to the degree of cell differentiation; (2) the predominant proliferating cells: myelocytic, granulocytic, or lymphocytic; and (3) increase in or maintenance of the number of abnormal cells in the blood—preleukemic.

Acute leukemia is characterized by fatigue, headache, sore throat, and dyspnea, followed by symptoms of acute tonsillitis, stomatitis, bleeding from the mucous membranes of the mouth, alimentary canal, and rectum, and pain in the bones and joints. There eventually is enlargement of the lymph nodes, liver, and spleen. Common to all leukemias are the tendency to bleed and the resultant anemia and increased susceptibility to infection. The diagnosis of leukemia requires confirmation of leukemic cells in the bone marrow by bone marrow biopsy and aspiration. Abnormalities may also be seen in peripheral blood smears.
Treatment. The treatment of choice is systemic combination chemotherapy with a variety of antineoplastic drug regimens. The disease can also be treated by a bone marrow transplant after a remission is achieved with chemotherapy.
Patient Care. Leukemia affects almost every system within the body and can present a variety of patient care problems. Of primary concern are those symptoms attendant to suppression of normal bone marrow function, particularly susceptibility to infection due to the predominance of immature and abnormally functioning white blood cells, bleeding tendency owing to decreased platelet count, and anemia due to decreased erythrocyte count. Chronic abnormal tissue perfusion, increased need for rest, and decreased sensitivity to heat and cold require careful planning and intervention. Additionally, the patient will need relief from pain and discomfort arising from enlargement of the lymph nodes and distention of the liver and spleen. 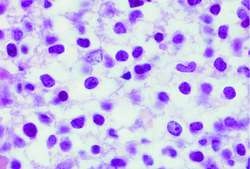 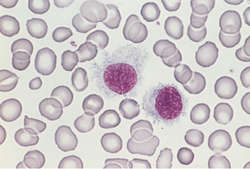 Abbreviation: HCL
A chronic, low-grade hematological malignancy of abnormally shaped B lymphocytes (“hairy cells”). The disease is marked by pancytopenia and splenomegaly. Median survival in untreated patients is about 5 years. The disease is rare, being only 1% to 2% of all leukemias. The median age of patients is 50 years; men are affected more commonly than women by a 4-to-1 ratio. See: illustration