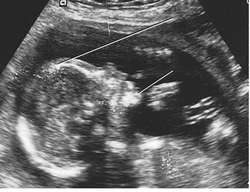 FETAL ULTRASOUND IMAGE
Inaudible sound in the frequency range of approx. 20,000 to 10 billion (109) cycles/sec. Ultrasound has different velocities that differ in density and elasticity from one kind of tissue to the next. This property permits the use of ultrasound in outlining the shape of various tissues and organs in the body. In obstetrics, for example, identifying the size and position of the fetus, placenta, and umbilical cord enables estimation of gestational age, detects some fetal anomalies and fetal death, and facilitates other diagnostic procedures, e.g., amniocentesis. In physical therapy, the thermal effects of ultrasound are used to treat musculoskeletal injuries by warming tissue, increasing tissue extensibility, and improving local blood flow. Ultrasound is used to facilitate movement of certain medications, e.g., pain relievers, into tissue (phonophoresis). Ultrasound is also used with electric current for muscular stimulation. The diagnostic and therapeutic uses of ultrasound require special equipment. See: illustration; phonophoresis; sonographer; ultrasonography

In ultrasonography a display in which imaging data are represented as echo amplitudes (on the y-axis) and time (on the x-axis), similar to the way electromagnetic waves are represented on an oscilloscope.
Synonym: A-mode; A-mode (amplitude modulation) display

In ultrasonography, a display that uses dots of differing intensities to represent echoes received from tissues that more strongly or weakly reflect sound waves.
Synonym: ; B-scan

A form of ultrasound used in echocardiography in which a dual crystal transducer continuously generates and receives an ultrasound signal. It is used to measure blood velocities, e.g., across heart valves. A serious shortcoming of continuous wave ultrasound is its inability to identify depth accurately.

Doppler ultrasonography that uses spectral Doppler in a constant series of echoes both originating and being received by the same transducer. It is used to study obstruction to blood flow through vessels.

Abbreviation: EBUS
The use of ultrasonic transducers carried within a bronchoscope to evaluate tissues in or adjacent to the trachea and bronchi. EBUS can be used to identify solid masses to be biopsied. It helps distinguish solid masses, which may be malignant, from blood vessels such as the aorta or pulmonary arteries, which should not be penetrated with a biopsy needle.

Abbreviation: ERUS
1. An imaging technique in which an ultrasound transducer is placed inside the rectum and used to evaluate the depth of colon and prostate cancers and the extent to which they have spread to neighboring lymph nodes.
2. Transrectal ultrasound.

Abbreviation: HIFU
A noninvasive form of thermotherapy in which ultrasonic energy is used to generate heat for therapeutic purposes within the body. HIFU has been used to cauterize internal blood vessels that are bleeding, to cavitate or coagulate growths or solid malignancies, e.g., breast, liver, pancreatic, or prostate cancers. The ultrasound transducer is placed on the skin and the energy from the transducer is directed at radiographically localized tissue depths and volumes.

The use of ultrasonography as a guide for local injections or for the placement of catheters, needles, or probes into body cavities or tumors. Interventional ultrasound is used to treat hepatocellular carcinoma, prostate cancer, and other solid tumors.

A colloquialism for a three-dimensional image of an unborn child visualized in the womb with ultrasonography treated as a memento. The image is kept by expectant parents as part of a scrapbook of pregnancy and anticipated childbirth.

An ultrasonic display mode in which the motion of structures is seen on the vertical axis of the display, used, e.g., to show the movement of the heart's valves and walls during diastole and systole.
Synonym: motion-mode display; time-motion mode ultrasound

Examination of the pelvis with an ultrasonic transducer placed inside the vagina. It is used in assessment of diseases or conditions affecting the cervix, uterus, fallopian tubes, or ovaries.
Synonym: endovaginal ultrasound.

Abbreviation: QUS
Measurement of the density of a body tissue, e.g., bone, by determining how rapidly sound travels through the tissue and how different sonic wavelengths are absorbed. QUS is used to diagnose osteopenia and osteoporosis.

A sonographic procedure that provides rapid, multiple images of an anatomical structure in the form of motion.

Abbreviation: TRUS
Imaging of the prostate gland and periprostatic tissues with an ultrasound transducer inserted into the anus and directed toward the anterior rectum. It is used to identify malignant tumors, guide biopsies, and provide assessments of tumor staging.
Synonym: endorectal ultrasound (2)

Abbreviation: HIFU
A noninvasive form of thermotherapy in which ultrasonic energy is used to generate heat for therapeutic purposes within the body. HIFU has been used to cauterize internal blood vessels that are bleeding, to cavitate or coagulate growths or solid malignancies, e.g., breast, liver, pancreatic, or prostate cancers. The ultrasound transducer is placed on the skin and the energy from the transducer is directed at radiographically localized tissue depths and volumes.
See also: ultrasound
Medical Dictionary, © 2009 Farlex and Partners