[TA]
the disk of hyaline cartilage between the metaphysis and the epiphysis of an immature long bone that permits the bone to grow longer.
Synonym(s): lamina epiphysialis [TA], growth plate
Farlex Partner Medical Dictionary © Farlex 2012

(ep'i-fiz'ē-ăl plāt) [TA]
The disc of cartilage between the metaphysis and the epiphysis of an immature long bone permitting growth in length.
Synonym(s): cartilago epiphysialis [TA] , growth plate.
Medical Dictionary for the Health Professions and Nursing © Farlex 2012 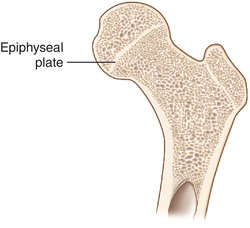 The place in long bones where growth occurs during childhood.
Mentioned in: Rickets
Gale Encyclopedia of Medicine. Copyright 2008 The Gale Group, Inc. All rights reserved.

Feedback
Flashcards & Bookmarks ?
Please log in or register to use Flashcards and Bookmarks. You can also log in with
Flashcards ?
My bookmarks ?
+ Add current page to bookmarks
Mentioned in ?
References in periodicals archive ?
Further studies are needed to ascertain whether the stage of development of growth plates is a determinant of the extent of the intra-articular inflammatory response to traumatic knee injuries.
Intra-Articular Cytokine Levels in Adolescent Patients after Anterior Cruciate Ligament Tear
Systemic and local regulation of the growth plate. Endocr.
Effects of Underwater Lipus on the Morphohistology of the CF-1 Mice Growth Plate in Late Lactation Stage/ Efectos del Ultrasonido Subacuatico Sobre la Morfohistologia de la Placa de Crecimiento de Ratones CF-1 en Etapa de Lactancia Tardia
The growth plate chondrocyte and endochondral ossification," Journal of Endocrinology, vol.
Astragalus Extract Mixture HT042 Improves Bone Growth, Mass, and Microarchitecture in Prepubertal Female Rats: A Microcomputed Tomographic Study
MV isolated from growth plate cartilage shows high BMP expression.
Extracellular Vesicles and Autophagy in Osteoarthritis
Unfortunately, many of these injuries are poorly managed, resulting in overuse strain on the growth plate and subsequent irregular and/or partial healing.
Chronic pain due to Little Leaguer's shoulder in an adolescent baseball pitcher: a case report
Kids' bones also have growth plates on the top and bottom.
Little world lost: despite efforts by non-profits and FDA, the pediatric device market remains woefully underserved and largely ignored
Previous research has focused on histological examination of growth plate remnants or fibrous tissue in lesions [2, 3, 6, 7] and revealed the presence of widened physes with sclerotic margins or fibrous tissue without physeal remnants.
Cartilage degeneration at symptomatic persistent olecranon physis in adolescent baseball players
Death of cartilage cells in the growth plate and articular surface is the basic pathologic feature, and this can result in growth retardation and secondary osteoarthrosis [4].
Arthroscopic ankle arthrodesis for treating osteoarthritis in a patient with Kashin-Beck disease
Longitudinal bone growth before and after birth takes place in the growth plate located at the epiphyses of long bones via an endochondral ossification process in which a hypertrophic cartilage template is made, calcified, and invaded by blood vessels and then converted to trabecular bone through the action of bone forming cells, osteoblasts, and bone resorbing cells, osteoclasts [1].
Effects of maternal hypoxia during pregnancy on bone development in offspring: a guinea pig model
In group 1, one case of premature growth plate closure occurred (Table 2).
Lateral condyle fracture of the humerus in children treated with bioabsorbable materials
Salter-Harris type II fracture refers to a physeal injury in which the fracture extends along the growth plate then out through a portion of the metaphysis, producing a triangular shaped metaphyseal fragment referred to as the "Thurston Holland sign." This is the most common form of physeal injury and has historically been associated with a good prognosis, though recent data now suggest that this injury is associated with a greater risk of growth impairment than previously thought [5].
Knee pain following a ski injury
OSD is characterized by inflammation of the growth plate just below the knee, the result of repetitive strain on the secondary ossification center of the tibial tuberosity.
Injection may be the best bet for young athletes' knee pain: closure of the tibial growth plate - the definitive remedy for Osgood-Schlatter disease - may be years away. Adolescent athletes sidelined by pain need relief now