[kok´us] (pl. coc´ci) (L.)
a spherical bacterium, usually slightly less than 1 μ in diameter, belonging to the Micrococcaceae family. It is one of the three basic forms of bacteria, the other two being bacillus (rod-shaped) and spirillum (spiral-shaped). A pathogenic coccus can almost always be classified as either a staphylococcus (occurring in clusters), or a streptococcus (occurring in short or long chains). Both staphylococci and streptococci are gram-positive and do not form spores.

The staphylococci are responsible for many serious infections, especially Staphylococcus aureus, which is the causative agent in boils, abscesses, osteomyelitis, and a large variety of other infections. Staphylococci have received much attention in recent years because of the ability of most strains to develop a resistance to antibiotics.

The most dangerous streptococci are those of the beta-hemolytic type. Various species of streptococci cause sore throat, scarlet fever, mastoiditis, and septicemia. 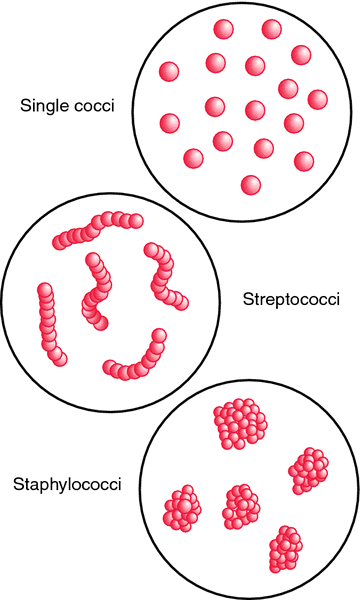 Cocci.
Miller-Keane Encyclopedia and Dictionary of Medicine, Nursing, and Allied Health, Seventh Edition. © 2003 by Saunders, an imprint of Elsevier, Inc. All rights reserved.

A common type of spherical or spheroidal bacterium. Cocci connected in line are called STREPTOCOCCI; those in bunches are called STAPHYLOCOCCI.
Collins Dictionary of Medicine © Robert M. Youngson 2004, 2005