A gene map of Chromosome 18. From Copstead, 1996.
genetic marker a gene having alleles that are all expressed in the phenotype, that is, they are codominant, and which can be used to study inheritance. The various blood group systems and serum or red blood cell proteins easily detected by electrophoresis or immunodiffusion are commonly used markers.
Miller-Keane Encyclopedia and Dictionary of Medicine, Nursing, and Allied Health, Seventh Edition. © 2003 by Saunders, an imprint of Elsevier, Inc. All rights reserved.

the genetic information carried by the specific DNA molecules of the chromosomes; specifically, the system whereby particular combinations of three consecutive nucleotides in a DNA molecule control the insertion of one particular amino acid in equivalent places in a protein molecule. The genetic code is almost universal throughout the prokaryotic, plant, and animal kingdoms. There are two known exceptions: In ciliated protozoans, the triplets AGA and AGG are read as termination signals instead of as l-arginine. This is also true of the human mitochondrial code, which, in addition, uses AUA as a code for l-methionine (instead of l-isoleucine) and UGA for l-tryptophan (instead of a termination signal).
Farlex Partner Medical Dictionary © Farlex 2012

n.
1. The set of DNA and RNA sequences that determine the amino acid sequences used in the synthesis of an organism's proteins. It is the biochemical basis of heredity and nearly universal in all organisms.
2. The set of 64 codons corresponding to the 20 amino acids used for protein synthesis and as the signals for starting and stopping protein synthesis.
genetic coding n.
The American Heritage® Medical Dictionary Copyright © 2007, 2004 by Houghton Mifflin Company. Published by Houghton Mifflin Company. All rights reserved.

Genetics A sequence of nucleotides, coded in triplets/codons along the mRNA, that determines the sequence of amino acids in a protein; a gene's DNA sequence can be used to predict an mRNA sequence; the 'words' and 'language' that govern the way in which genetic information–DNA is 'written' in the genome and translated into the proteins that perform the genes' activities. See Amino acid, Code, Codon, DNA, Gene, DNA sequence, Nucleotide, Protein, RNA.
McGraw-Hill Concise Dictionary of Modern Medicine. © 2002 by The McGraw-Hill Companies, Inc.

(jĕ-net'ik kōd)
The genetic information carried by the specific DNA molecules of the chromosomes; specifically, the system whereby particular combinations of three consecutive nucleotides in a DNA molecule control the insertion of one particular amino acid in equivalent places in a protein molecule.
Medical Dictionary for the Health Professions and Nursing © Farlex 2012

The sequence of the bases, adenine, guanine, cytosine and thymine, lying along the nucleic acid (DNA) molecules, the chromosomes. The bases occur in groups of three, each group being called a codon and each codon contains any three of the four in any order. This gives 64 different combinations, allowing some redundancy. A particular codon selects a particular one of the 20 amino acids or an instruction such as ‘gene starts here’ or ‘end of gene’. The sequence of codons ensures that a number of particular amino acids are linked together in a particular order so as to form a protein molecule-usually an ENZYME that promotes some biochemical process.
Collins Dictionary of Medicine © Robert M. Youngson 2004, 2005 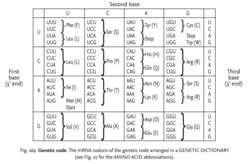 a collection of CODONS of DNA and RNA that contains the information for synthesis of PROTEINS. Each codon is a triplet of BASES, derived from the four bases of the nucleic acid: A denine, C ytosine, G uanine and T hymine (or U racil in RNA), thus giving 43 = 64 combinations. The codons code for the AMINO ACIDS of the POLYPEPTIDE CHAIN, and also for the start (initiation) signals (commonly AUG, sometimes GUG) and the stop (termination) signals (UAG, UAA and UGA) in TRANSLATION. Note that the code shows DEGENERACY. Where there is more than one codon for a particular amino acid, certain organisms will preferentially utilize one codon rather than another to encode that amino acid, a phenomenon called CODON USAGE. The genetic code as shown in Fig. 169 is often referred to as being ‘universal’, with the same proteins being encoded by a particular base sequence in different organisms. However, there are exceptions, at least in some mitochondria, where certain codons code for different amino acids from those shown in the figure. For example, in mammalian mitochondria AGA and AGG function as the stop codons in translation.
Collins Dictionary of Biology, 3rd ed. © W. G. Hale, V. A. Saunders, J. P. Margham 2005