[sak]
a baglike organ or structure; see also bag, pocket, and pouch.
air s's (alveolar s's) the spaces into which the alveolar ducts open distally, and with which the alveoli communicate; see also lung.
amniotic sac the sac formed by the amnion, enclosing the fetus suspended in amniotic fluid; popularly known as the bag of waters.
conjunctival sac the potential space, lined by conjunctiva, between the eyelids and the eyeball.
endolymphatic sac the blind, flattened cerebral end of the endolymphatic duct.
hernial sac the peritoneal pouch that encloses protruding intestine.
lacrimal sac the dilated upper end of the nasolacrimal duct; see also lacrimal apparatus.
yolk sac the extraembryonic membrane connected with the midgut; in vertebrates below true mammals, it contains a yolk mass. 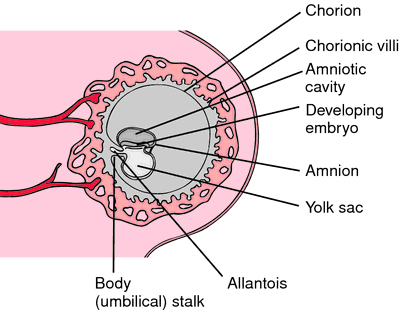 Yolk sac in a developing embryo. From Applegate, 2000.

1. in vertebrates with telolecithal eggs, the highly vascular layer of splanchnopleure surrounding the yolk of an embryo;
2. in humans and other mammals, the sac of extraembryonic membrane that is located ventral to the embryonic disk and, after formation of the gut tube, is connected to the midgut; by the second month of development, this connection has become the narrow yolk stalk; the yolk sac is the first hematopoietic organ of the embryo, and its vitelline circulation plays an important role in the early embryonic circulation; the sac is also the site of origin of the primordial germ cells.
Synonym(s): umbilical vesicle, vesicula umbilicalis, vitelline sac

n.
A membranous sac attached to the embryo and enclosing the yolk in egg-laying vertebrates. In humans and other placental mammals, it functions as the circulatory system for the embryo before internal circulation begins.

(ŭm-bil'i-kăl ves'i-kĕl)
A saclike structure formed from the exocelomic cavity of a blastocyst.
Synonym(s): yolk sac.

A tiny bag attached to the embryo that provides early nourishment before the PLACENTA is formed.

the sac-like structure that contains YOLK and is in direct contact with the gut of embryos in fish, reptiles and birds. Though present in mammalian embryos, it does not contain yolk but absorbs uterine secretions until the PLACENTA (1) becomes functional.