(simz),
a position to facilitate a vaginal examination, with the patient lying on her side with the lower arm behind the back, the thighs flexed, the upper one more than the lower.
Synonym(s): English position, lateral recumbent position, semiprone position
Farlex Partner Medical Dictionary © Farlex 2012

(po-zish'on ) [L. positio, a placing]
1. The place or arrangement in which something is put.
2. The manner in which a body is arranged, as by the nurse or physician for examination.
3. In obstetrics, the relationship of a selected fetal landmark to the maternal front or back, and on the right or left side. See: table; presentation for illus.

The position assumed when a person is standing erect with arms at the sides, palms forward. Synonym: orthograde position

A radiographical examination position in which the central ray enters the front of the body and exits from the back.

Any of several postures that reduce edema and the shortening of ligaments and tendons caused by abnormal muscle tone, e.g., in patients with injuries or burns.

A radiographical examination position in which an image is obtained with the central ray entering the body at an angle.

In inflammation of the hip joint, the flexion, abduction, and outward rotation of the thigh, which produces relief.

A method of obtaining traction, abduction, and external rotation of the shoulder by securing the patient's wrist to the head of the bed.

The most posterior position of the mandible in relation to the maxilla.

, close-packed position
Of a joint, the position in which there is maximum congruency of the articular surfaces and joint stability is derived from the alignment of bones. This is the opposite of the maximum loose-packed position.

A position in which the patient lies on the back with the head and shoulders elevated at an angle of 30° or more. It is employed in digital examination of genitalia and in bimanual examination of the vagina. 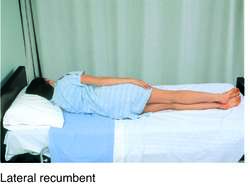 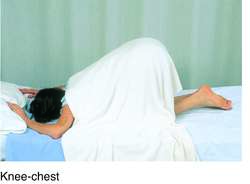 A position in which the patient lies on the back with the lower extremities moderately flexed and rotated outward. It is employed in the application of obstetrical forceps, repair of lesions following parturition, vaginal examination, and bimanual palpation.
See: illustration

In obstetrics, a position in which the mother and infant are face to face. This position encourages eye contact and is conducive to attachment.

The relationship of a specified bony landmark on the fetal presenting part to the quadrants of the maternal pelvis.

A body position used in physical examination to evaluate the genitals and perineum in which the patient lies on the back or sits on the buttocks, bends the knees, abducts the thighs, and draws the heels toward the pelvis. Synonym: butterfly position.

In making splints for the hand, the position in which the wrist is dorsiflexed 20 to 35°, a normal transverse arch is maintained, and the thumb is in abduction and opposition and aligned with the pads of the four fingers. Proximal interphalangeal joints are flexed 45 to 60°.

A position with the patient on the knees, thighs upright, body resting on elbows, head down on hands. It is used when it is not possible to use the classic knee-chest position.
Synonym: knee-elbow position

A position with the patient on the knees, thighs upright, the head and upper part of the chest resting on the table, arms crossed above the head. It is employed in displacement of a prolapsed fundus, dislodgment of the impacted head of a fetus, management of transverse presentation, replacement of a retroverted uterus or displaced ovary, or flushing of the intestinal canal.
Synonym: knee-chest position See: dorsal recumbent position for illus.

Placement of a limb so that its distal end is lower than the level of the heart. Gravity affects the fluids within the limb, drawing or retaining them to the distal aspect. When limbs, esp. injured limbs, are placed below the level of the heart, interstitial pressure is increased, encouraging the formation and retention of edema within the extremity.

Abbreviation: HELP
A body posture that decreases the rate of heat loss when a person is immersed in water. It is an important component of aquatic safety. HELP protects the head, neck, chest, and groin from rapid heat loss and delays the onset of hypothermia. The position is assumed by floating on the back with the head and neck above the water line, the arms crossed on the chest, and the legs crossed with the knees drawn up toward the perineum. The body is sustained in a stable floating position in the water by a personal flotation device.

A position in which the patient lies supine with feet extended. It is used in palpation, in auscultation of fetal heart, and in operative procedures.

1. A position in which the patient lies flat on the abdomen with the feet extended. It is used in examination of the back and spinal column.
2. Face down.
Synonym: abdominal position

A position in which the patient lies on the back, shoulders elevated, legs flexed on thighs, thighs at right angles to the abdomen. It is used when introducing a urethral sound.
Synonym: reclining position

In radiology, a side-lying position, which allows the central ray to enter the upright side.

A colloquial term for a dorsal recumbent position with the hips and knees flexed slightly (approx. 5°–10°).

A position with the patient on the left side, right knee and thigh drawn up; employed in vaginal examination. Synonym: English position; obstetrical position

A surgical position used in gynecologic, rectal, and urologic procedures in which the patient lies on her back, thighs flexed on the abdomen, legs on thighs, thighs abducted. It is used in genital tract operations, vaginal hysterectomy, and the diagnosis and treatment of diseases of the urethra and bladder.
Synonym: dorsosacral position See: dorsal recumbent position for illus.

Of a joint, the position where maximum joint play occurs, where ligaments and capsule have the least amount of tension.
Synonym: resting position

The upright or nearly upright position of the upper trunk of a patient in a bed or chair. It facilitates breathing in those with congestive heart failure and some forms of pulmonary disease.

In dentistry, the position of the mandible at rest when the patient is sitting upright and the condyles are in an unstrained position. The jaw muscles are relaxed. Synonym: rest position

Abbreviation: PA position
In radiology, a position in which the central ray enters the posterior surface of the body and exits the anterior surface.

A position in which the patient is lying face downward.
See: dorsal recumbent position for illus.

Abbreviation: POE
A position in which the body is lying face down with the upper trunk and head elevated, propped up by the arms, while the lower body is in contact with the supporting surface. The weight of the upper body rests on the elbows and forearms.

This position, a component of the developmental sequence, is used in physical therapy to improve weight bearing and stability through the shoulder girdle. Elbow joint stability is not required, because the joint is not involved.

A position in which the patient is placed on the left side with the left arm moved aside and supported to allow for lung expansion and the right leg crossed over the left. This position affords the unconscious, breathing patient the best protection from airway occlusion or aspiration of fluids into the lungs.

In making splints for the hand, the position in which the forearm is midway between pronation and supination, the wrist is at 12 to 20° dorsiflexion, and the phalanges are slightly flexed. The thumb is in partial opposition and forward.

A position in which the patient lies on the back with the trunk elevated at approx. 30°.
See: Fowler's position

subtalar neutral position of the foot

The middle range of the subtalar joint with no pronation or supination measured. It is usually one third of the way from the fully everted position.

In radiology, a position in which the central ray separates the images of anatomical parts by skimming between them.

A position that may be assumed during respiratory distress to facilitate the use of respiratory accessory muscles. The patient sits leaning forward, with hands placed on the bed or a table with arms braced.

Feedback
Flashcards & Bookmarks ?
Please log in or register to use Flashcards and Bookmarks. You can also log in with
Flashcards ?
My bookmarks ?
+ Add current page to bookmarks
Mentioned in ?
References in periodicals archive ?
17 NATHAN DYER Club: Swansea City Nationality: English Position: Right wing SWANSEA'S official player of the season, although realistically that award should have gone to Scott Sinclair, the bloke out on the other flank.
8 SCOTT SINCLAIR Club: Swansea City Nationality: English Position: Left wing THE first of three current Swansea stars who makes our top 10.
...IT'S OUR TOP 40 FOOTBALL STARS OF 2011; HEAD of Sport PAUL ABBANDONATO turns football's answer to Alan Freeman as he reflectsintoWelsh upon an historic year and picks the top 40 players, in descending order, who have lit up our soccer stage in 2011. The Wales on Sunday list of Welsh football's finest is produced here over the next three pages
More specifically, according to her, he explained that he could not help but read an e-mail on a computer screen that "said something about how the English position was advertised because it might hurt the college in the Hudson case." After he left, Ferguson immediately called Hudson and recounted her conversation with Pitts.
E-mail: write protection?
MIKELE LEIGERTWOOD AGE: 28 NATIONALITY: English POSITION: Midfield APPEARANCES THIS SEASON: 33 On a season-long loan deal from Championship winners Queens Park Rangers, his move has worked out brilliantly for Reading.
Meet the players ... the Royals Meet the players ... the Swans
Alerted to the whereabouts of the English by the shouts of some soldiers who had flushed a stag from the woods, the French forces caught their adversaries completely by surprise and overran English positions before their vaunted archers could dismount and position their bows.
"Maid" of piety and patriotism: Joan of Arc, nicknamed "the Maid," was one of history's first modern patriot/nationalists. Her unique blend of piety and patriotism laid the foundation for a free, unified France. (History: Struggle for Freedom)
The English positions that Professor Paulson has so ably presented here nevertheless distorted Cervantes's moral premises as they expanded the book's appeal to modern audiences for very different reasons.
Don Quixote in England: The Aesthetics of Laughter