[e-ki″no-kok´us]
a genus of small tapeworms.
Echinococcus granulo´sus a species parasitic in dogs and wolves and occasionally in cats; its larvae may develop in nearly all mammals, forming hydatid cysts in the liver, lungs, kidneys, and other organs. It reverses the usual process of development in human and animal hosts: the adult is found in the intestine of dogs, whereas the larva develops in the human intestine, penetrates the intestinal wall, and settles in various organs, most often the liver, where it forms a cyst (hydatid cyst) that grows slowly. Treatment is by surgical removal of the cyst. This type of worm infection is fortunately not common in the United States.
Echinococcus multilocula´ris a species whose adult forms usually parasitize the fox and wild rodents, although humans are sporadically infected. It resembles E. granulosus, but the larvae form alveolar or multilocular rather than unilocular cysts.
Miller-Keane Encyclopedia and Dictionary of Medicine, Nursing, and Allied Health, Seventh Edition. © 2003 by Saunders, an imprint of Elsevier, Inc. All rights reserved.

(e-kī'nō-kok'ŭs),
A genus of small taeniid tapeworms, two to five segments in adult worms; adults are found in various carnivores but not in humans; larvae, in the form of hydatid cysts, are found in the liver and other organs of ruminants, pigs, horses, rodents, and humans (for example, sheep herders living closely with their infected dogs, contact with infected feces).
[echino- + G. kokkos, a berry]
Farlex Partner Medical Dictionary © Farlex 2012

(ĕ-kī'nō-kok'ŭs)
A genus of very small tapeworms; adults are found in various carnivores but not in humans; larvae, in the form of hydatid cysts, are found in the liver and other organs of ruminants, pigs, horses, rodents, and, under specific epidemiologic circumstances, humans (in whom disease is called hydatid disease). Worm has been studied in offensive biowarfare programs.
[echino- + G. kokkos, a berry]
Medical Dictionary for the Health Professions and Nursing © Farlex 2012 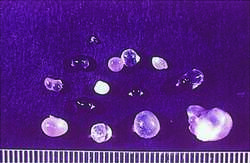 A species that infests dogs and other carnivores. Its hydatid (larva) develops in other mammals, including humans, and causes the formation of hydatid cysts in the liver or lungs. Synonym: dog tapeworm
See: illustration; hydatid

A species characterized by development of daughter cysts from the mother cyst.
See: hydatid

A species that primarily infests foxes and moles. It is the cause of alveolar hydatid disease in humans, one of the deadliest helminthic infections.

A species found primarily in the tropics, where it colonizes wild cats. It may cause echinococcal cysts in humans.

One of several tapeworms of the genus Echinococcus , the larvae of which form large, spherical cysts in the tissues, including the brain, causing serious or fatal disease.
Collins Dictionary of Medicine © Robert M. Youngson 2004, 2005