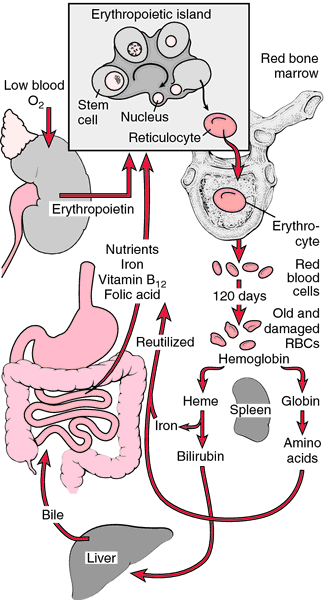 The erythrocyte sedimentation rate is often inconclusive and is not considered specific for any particular disorder. It is most often used as a gauge for determining the progress of an inflammatory disease such as rheumatic fever, rheumatoid arthritis, or a respiratory infection. The information provided by this test must be used in conjunction with results from other tests and clinical evaluations.

The rate at which red blood cells settle out in a tube of unclotted blood, expressed in millimeters per hour; elevated sedimentation rates indicate the presence of inflammation.
Mentioned in: Erythrocyte Sedimentation Rate, Pelvic Inflammatory Disease
Gale Encyclopedia of Medicine. Copyright 2008 The Gale Group, Inc. All rights reserved.

More discussions about ESR
This content is provided by iMedix and is subject to iMedix Terms. The Questions and Answers are not endorsed or recommended and are made available by patients, not doctors.

Feedback
Flashcards & Bookmarks ?
Please log in or register to use Flashcards and Bookmarks. You can also log in with
Flashcards ?
My bookmarks ?
+ Add current page to bookmarks
Mentioned in ?
References in periodicals archive ?
ESR was raised in 41 (91.11%) out of 45 patients, out of these 41 patients 22 (95.65%) were of polyarticular JIA, 14 (82.35%) were of Oligoarticular JIA and 5 (100%) cases were of SOJIA.
JUVENILE ARTHRITIS DISEASE ACTIVITY SCORE IN CHILDREN WITH JUVENILE IDIOPATHIC ARTHRITIS AND ITS ASSOCIATION WITH CLINICAL DISEASE ACTIVITY IN LAHORE
The present study results show a strong association of cigarette smoking and increased ESR and TLC values in smokers.
Effect of cigarette smoking on erythrocyte sedimentation rate and total leukocyte count
Acute-phase protein markers (CRP and ESR) are insufficient to show disease activity, and only few specific biomarkers help in controlling the disease.
Does obesity cause chronic inflammation? The association between complete blood parameters with body mass index and fasting glucose
There are a number of challenges associated with recovering plastics from ESR with a composition such as that shown in Table 1.
PC/ABS recovered from shredded waste electrical & electronic equipment
Zero-crossing amplitudes in the first order derivative spectra were measured at 208 and 282 nm for ESR and DRS, respectively.
Development of simultaneous derivative spectrophotometric and HPLC methods for determination of 17-beta-estradiol and drospirenone in combined dosage form
Two other ways ESR can be used are to diffuse past traumatic experiences and prepare for future stressful situations.
Stress relief at your finger tips for labor, delivery and afterward
Frank Minero, founder and President at UrbanScooters.com, commented on the product's launch: “The ESR 750H Hoverboard Li-Ion is an excellent scooter with lots of options, so we're quite happy to be offering it now.”
Go-Ped ESR750H Hoverboard Li-Ion in Stock at UrbanScooters.com
AIMS AND OBJECTIVES: The study was conducted with the primary objective of comparing the VesMATIC cube80[TM] analyzer with the modified Westergren method for the analysis of ESR.
Validation of an erythrocyte sedimentation rate analyzer with modified Westergren method
At the end of the release cycle of an ESR, an update to the next ESR will be available
Mozilla Puts Firefox Extended Support Release into Action
The proposal to develop Firefox ESR has now been escalated from a "proposal" to what Mozilla calls "a plan of action," Mozilla official Jay Sullivan said in a blog post on Tuesday.
Mozilla moves forward with plan for enterprise version of Firefox
The present study was aimed at using the ESR method for dating tooth enamel from the Aguazuque archaeological site in Soacha, Colombia.
Quaternary dating by electron spin resonance (ESR) applied to human tooth enamel
"OMPF-Command View offers, those with a need to know, secure access to service record documents not contained in the Electronic Service Record (ESR), such as enlistment documents, performance evaluations, DD-214 discharge certificates and others," Wardlaw said.
NPC launches new records review tool: OMPF-Command View