Achalasia is a disorder of the esophagus that prevents normal swallowing.

Achalasia is caused by degeneration of the nerve cells that normally signal the brain to relax the esophageal sphincter. The ultimate cause of this degeneration is unknown. Autoimmune disease or hidden infection is suspected.

Dysphagia, or difficulty swallowing, is the most common symptom of achalasia. The person with achalasia usually has trouble swallowing both liquid and solid foods, often feeling that food "gets stuck" on the way down. The person has chest pain that is often mistaken for angina pectoris (cardiac pain). Heartburn and difficulty belching are common. Symptoms usually get steadily worse. Other symptoms may include nighttime cough or recurrent pneumonia caused by food passing into the lower airways.

Diagnosis of achalasia begins with a careful medical history. The history should focus on the timing of symptoms and on eliminating other medical conditions that may cause similar symptoms. Tests used to diagnose achalasia include:

The first-line treatment for achalasia is balloon dilation. In this procedure, an inflatable membrane or balloon is passed down the esophagus to the sphincter and inflated to force the sphincter open. Dilation is effective in about 70% of patients.
Three other treatments are used for achalasia when balloon dilation is inappropriate or unacceptable.

Most patients with achalasia can be treated effectively. Achalasia does not reduce life expectancy unless esophageal carcinoma develops.

There is no known way to prevent achalasia.

Botulinum toxin — Any of a group of potent bacterial toxins or poisons produced by different strains of the bacterium Clostridium botulinum. The toxins cause muscle paralysis.
Dysphagia — Difficulty in swallowing.
Endoscopy — A test in which a viewing device and a light source are introduced into the esophagus by means of a flexible tube. Endoscopy permits visual inspection of the esophagus for abnormalities.
Esophageal manometry — A test in which a thin tube is passed into the esophagus to measure the degree of pressure exerted by the muscles of the esophageal wall.
Esophageal sphincter — A circular band of muscle that closes the last few centimeters of the esophagus and prevents the backward flow of stomach contents.
Esophagomyotomy — A surgical incision through the muscular tissue of the esophagus.
Esophagus — The muscular tube that leads from the back of the throat to the entrance of the stomach.
Peristalsis — The coordinated, rhythmic wave of smooth muscle contraction that forces food through the digestive tract.
Reflux — An abnormal backward or return flow of a fluid.
Gale Encyclopedia of Medicine. Copyright 2008 The Gale Group, Inc. All rights reserved.

[ak″ah-la´zhah]
failure to relax of the smooth muscle fibers of the gastrointestinal tract at any junction of one part with another. Especially failure of the lower esophagus to relax with swallowing, due to degeneration of ganglion cells in the wall of the organ. 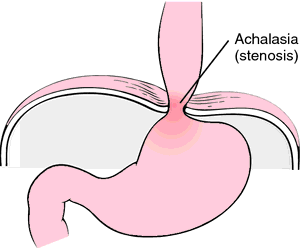 
The cause is unknown, but anxiety and emotional tension seem to aggravate achalasia and precipitate attacks. As the condition progresses there is dilatation of the esophagus (megaesophagus) above the constriction and loss of peristalsis in the lower two-thirds of the organ.
Symptoms. The patient complains of progressive dysphagia and a feeling of fullness in the sternal region; vomiting frequently occurs, and there may be aspiration of the esophageal contents into the respiratory passages. As a result of this aspiration the patient may develop pneumonia or atelectasis. Diagnosis is confirmed by manometric readings, which document motor dysfunction.
Treatment. Conservative treatment of mild cases consists of advising the patient to eat a bland diet that is low in bulk. Very large meals should be avoided and all foods should be eaten slowly with frequent drinking of fluids during the meal. To reduce the possibility of aspiration of esophageal contents during sleep, the patient is instructed to sleep with the head and shoulders elevated.

A nonsurgical method for treating resistant cases is repeated dilation of the esophageal sphincter by means of a bougie or by a pneumatic bag that is guided into place under x-ray visualization.

As a last resort surgical intervention may be necessary. An incision, which includes the lower esophagus and upper stomach wall, is made down to but not through the intestinal mucosa. This allows for stretching of the mucosa to accommodate food passing through. Approach is made through an incision into the chest; thus, preoperative care and postoperative care are the same as for elective chest surgery (see thoracic surgery).
Miller-Keane Encyclopedia and Dictionary of Medicine, Nursing, and Allied Health, Seventh Edition. © 2003 by Saunders, an imprint of Elsevier, Inc. All rights reserved.

(ak-ă-lā'zē-ă),
Failure to relax; referring especially to visceral openings such as the pylorus, cardia, or any other sphincter muscle.
[G. a- priv. + chalasis, a slackening]
Farlex Partner Medical Dictionary © Farlex 2012

A dysmotility disorder characterised by a loss of peristalsis in the distal 2⁄3 of the oesophagus accompanied by impaired relaxation of the lower oesophageal sphincter.

(ak-ă-lā'zē-ă)
Failure to relax; referring especially to visceral openings such as the pylorus, cardia, or any other sphincter muscles.
[G. a- priv. + chalasis, a slackening]
Medical Dictionary for the Health Professions and Nursing © Farlex 2012

Failure of a muscle ring (SPHINCTER) to relax when it should. Achalasia most commonly affects the sphincter at the bottom of the gullet (OESOPHAGUS). See also ACHALSIA OF THE CARDIA.
Collins Dictionary of Medicine © Robert M. Youngson 2004, 2005