[di-fil″o-both´re-um]
a genus of large tapeworms. D. la´tum is the broad or fish tapeworm, an intestinal parasite of humans, dogs, cats, and other fish-eating mammals.
Miller-Keane Encyclopedia and Dictionary of Medicine, Nursing, and Allied Health, Seventh Edition. © 2003 by Saunders, an imprint of Elsevier, Inc. All rights reserved.

(dī-fil'lō-both'rē-ŭm)
A large genus of tapeworms (order Pseudophyllidea) characterized by a spatulate scolex with dorsal and ventral sucking grooves, or bothria. Several species are found in humans, although only one, Diphyllobothrium latum, is of widespread importance.
[G. di-, two, + phyllon, leaf, + bothrion, little ditch]
Medical Dictionary for the Health Professions and Nursing © Farlex 2012

A species infesting dogs and seals in Greenland. The plerocercoids are occasionally found in humans. Synonym: heart-shaped tapeworm

A species infesting dogs, cats, and other carnivores. Larval stages are occasionally found in humans. 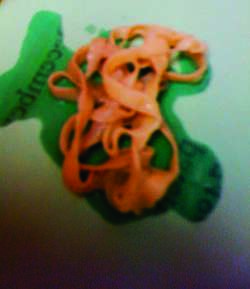 A species that is native to Scandinavia, the Baltics, and western Russia, and is now found in North America, esp. the Pacific Northwest, that infests fish and mammals. The adult lives in the intestine of fish-eating mammals, including humans. It is the largest tapeworm infesting humans and may reach a length of 50 to 60 ft (15.2 to 18.3 m); the average is 20 ft (6.1 m). The eggs develop into ciliated larvae that are eaten by small crustaceans called copepods. The larvae pass through several stages in the copepods and develop further after the copepods are eaten by fish, finally encysting in fish muscle. People acquire the infection by eating raw or poorly cooked fish that contains cysts. Infection can be prevented by thoroughly cooking all freshwater fish or by keeping the fish frozen at -10°C (14°F) for 48 hr before eating. Synonym: broad tapeworm; fish tapeworm See: illustration

Praziquantel is used to treat the infestation.