Defibrillation is a process in which an electronic device sends an electric shock to the heart to stop an extremely rapid, irregular heartbeat, and restore the normal heart rhythm.

Defibrillation is performed to correct life-threatening fibrillations of the heart, which could result in cardiac arrest. It should be performed immediately after identifying that the patient is experiencing a cardiac emergency, has no pulse, and is unresponsive.

Defibrillation should not be performed on a patient who has a pulse or is alert, as this could cause a lethal heart rhythm disturbance or cardiac arrest. The paddles used in the procedure should not be placed on a woman's breasts or over a pacemaker.

Fibrillations cause the heart to stop pumping blood, leading to brain damage and/or cardiac arrest. About 10% of the ability to restart the heart is lost with every minute that the heart stays in fibrillation. Death can occur in minutes unless the normal heart rhythm is restored through defibrillation. Because immediate defibrillation is crucial to the patient's survival, the American Heart Association has called for the integration of defibrillation into an effective emergency cardiac care system. The system should include early access, early cardiopulmonary resuscitation, early defibrillation, and early advanced cardiac care.
Defibrillators deliver a brief electric shock to the heart, which enables the heart's natural pacemaker to regain control and establish a normal heart rhythm. The defibrillator is an electronic device with electrocardiogram leads and paddles. During defibrillation, the paddles are placed on the patient's chest, caregivers stand back, and the electric shock is delivered. The patient's pulse and heart rhythm are continually monitored. Medications to treat possible causes of the abnormal heart rhythm may be administered. Defibrillation continues until the patient's condition stabilizes or the procedure is ordered to be discontinued.
Early defibrillators, about the size and weight of a car battery, were used primarily in ambulances and hospitals. The American Heart Association now advocates public access defibrillation; this calls for placing automated external defibrillators (AEDS) in police vehicles, airplanes, and at public events, etc. The AEDS are smaller, lighter, less expensive, and easier to use than the early defibrillators. They are computerized to provide simple, verbal instructions to the operator and to make it impossible to deliver a shock to a patient whose heart is not fibrillating. The placement of AEDs is likely to expand to many public locations.

After defibrillation, the patient's cardiac status, breathing, and vital signs are monitored until he or she is stable. Typically, this monitoring takes place after the patient has been removed to an intensive care or cardiac care unit in a hospital. An electrocardiogram and chest x ray are taken. The patient's skin is cleansed to remove gel or paste, and, if necessary, ointment is applied to burns. An intravenous line provides additional medication, as needed.

Skin burns from the defibrillator paddles are the most common complication of defibrillation. Other risks include injury to the heart muscle, abnormal heart rhythms, and blood clots.

Cardiac arrest — A condition in which the heart stops functioning. Fibrillation can lead to cardiac arrest if not corrected quickly.
Fibrillation — Very rapid contractions or twitching of small muscle fibers in the heart.
Pacemaker — A surgically implanted electronic device that sends out electrical impulses to regulate a slow or erratic heartbeat.

[de-fib″rĭ-la´shun]
termination of atrial or ventricular fibrillation, usually by electric shock. Defibrillation by precordial shock is accomplished by delivering a nonsynchronized direct current to the myocardium. It is an emergency procedure, used to terminate a life-threatening ventricular arrhythmia. The electric shock is delivered either by placing metal paddles on the chest (closed defibrillation) or by applying paddles directly to the heart muscle, as in cardiac surgery.

The procedure carries some risk and should be done only by specially trained physicians, nurses, and paramedics. Cardiopulmonary resuscitation and the administration of intravenous fluids and drugs are essential components of defibrillation. Sodium bicarbonate is given to combat acidosis; lidocaine or amiodarone is given to forestall arrhythmias that may develop during and after defibrillation.

Electrocardiographic readings and assessment of ECG patterns are done prior to the procedure to verify the presence of a lethal arrhythmia, and afterwards to evaluate the effectiveness of the treatment. Some ECG machines and cardiac monitors can continue to function during defibrillation because they have been designed to withstand the electrical shock when it is delivered to the patient.

Burns of the skin may occur under the paddles at the time of defibrillation; steroid or lanolin-based ointments or creams are usually prescribed as treatment. The use of conduction gel and close contact of paddles to skin may prevent burns. More serious complications of defibrillation include cardiac arrest, respiratory arrest, neurologic impairment, pulmonary edema, and pulmonary and systemic emboli. The patient must be monitored carefully after the procedure for return of ventricular fibrillation. Additional observations include changes in blood pressure; pulse rate, rhythm, and character; state of consciousness; and adequacy of ventilation. 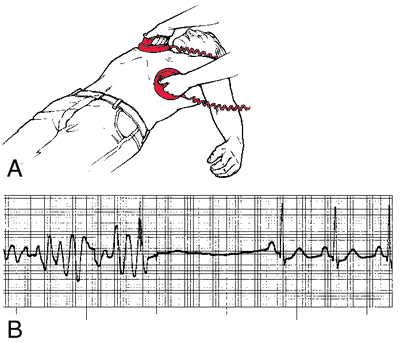 (dē-fib'ri-lā'shŭn),
The arrest of fibrillation of the cardiac muscle (atrial or ventricular) with restoration of the normal rhythm, if successful.

(dē-fib'ri-lā'shŭn)
The arrest of fibrillation of the cardiac muscle (atrial or ventricular) with restoration of the normal rhythm.

The restoration of the normal beat rhythm in a heart which is in a state of rapid, ineffectual twitching-one kind of CARDIAC ARREST. A strong pulse of electric energy (about 300 joules) is passed across the heart from two metal electrodes pressed to the chest.

(dē-fib'ri-lā'shŭn)
The arrest of fibrillation of the cardiac muscle (atrial or ventricular) with restoration of the normal rhythm.

Q. Does anyone know if its possible to get breast implants if i have an implanted defibrillator? I have hypertrophic cardiomyopathy. I'm 27 and in great health, I workout 6 days a week and I have no further symptoms.

A. Thanks for your help. In fact I have an appointment with my cardiologist in a couple of weeks and if he says its OOK I will definitely consult it with the plastic surgeon as well. However I always try to do some additional research on my own and get second opinions.
Ince again,
Thanks!
More discussions about defibrillation