[to]
a digit of the foot.
claw toe a toe deformity seen in many patients with rheumatoid arthritis, consisting of dorsal subluxation of toes 2 through 5; the metatarsal heads bear weight and become painful during walking so that the patient has a shuffling gait.
hammer toe deformity of a toe in which the proximal phalanx is extended and the second and distal phalanges are flexed, causing a clawlike appearance; it most often affects the second toe. 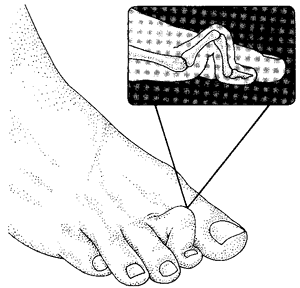 Hammer toe of the second metatarsophalangeal (MTP) joint. From Ignatavicius and Workman, 2000.
Morton's toe Morton's neuralgia.
pigeon toe a permanent toeing-in position of the feet; severe cases are considered a form of clubfoot (talipes).
webbed t's syndactyly of the toes abnormally joined by strands of tissue at their base.
A foot deformity of childhood, which is characterised by medial rotation of the forefoot—metatarsus varus—and medial tibial or femoral torsion; the deformities require surgery

In-toeing, talipes varus Orthopedics A foot deformity of childhood, which is characterized by medial rotation of the forefoot–metatarsus varus and medial tibial or femoral torsion–the deformities require surgery

(pijŏn tō)
Disorder of feet in which the toes turn inward.