[kra″ne-o-sin″os-to´sis]
premature closure of the cranial sutures, resulting in skull deformities such as oxycephaly, plagiocephaly, scaphocephaly, or trigonocephaly. 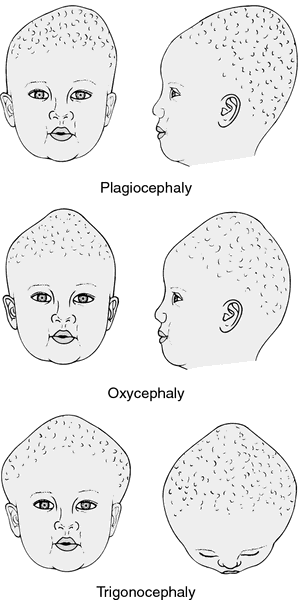 (krā'nē-ō-sin'os-tō'sis), [MIM*218500]
Premature ossification of the cranium and obliteration of the sutures. The particular sutures involved determine the resultant shape of the malformed head.
Synonym(s): craniostosis

(krā'nē-ō-sin'os-tō'sis)
Premature ossification of the cranium and closure of the sutures.

Premature fusion of the suture joints of the skull, usually occurring before birth and leading to a severe skull deformity. The condition can be caused by a mutation of the gene for a fibroblast growth factor receptor.

A premature closure of one or more of the joints (fissures) between the bones of the skull, which causes an abnormally shaped skull.
Mentioned in: Papilledema

(krā'nē-ō-sin'os-tō'sis) [MIM*218500]
Premature ossification of cranium and obliteration of sutures.

Feedback
Flashcards & Bookmarks ?
Please log in or register to use Flashcards and Bookmarks. You can also log in with
Flashcards ?
My bookmarks ?
+ Add current page to bookmarks
TheFreeDictionary presents:
Write what you mean clearly and correctly.
Mentioned in ?
References in periodicals archive ?
The plan of effective treatment in craniosynostoses comprises surgical treatment of skull deformation.
Cephalic index in the first three years of life: study of children with normal brain development based on computed tomography
Craniosynostoses; molecular genetics, principles of diagnosis, and treatment.
Craniosynostoses; molecular genetics, principles of diagnosis, and treatment
It and other craniosynostoses can lead to increased intracranial pressure, facial deformity, and other problems, and they require surgery to remove the closed suture and reshape the skull.
Distinguishing head deformities key, expert says
This model was available for mature surgeons for preoperative surgical planning and with the goal to find new techniques, predict the outcome of the operation, use the model in all complex and syndromic craniosynostoses for both better results and reducing the operative time and associated blood loss.
A questionnaire-based study on the use of medical simulation models by Greek General Practice and General Surgery residents; testing hand-made models as low-cost alternatives
To standardize and simplify the procedures for diagnosing craniosynostoses, we first set up DHPLC conditions for scanning a selected panel of gene regions where the majority of mutations have been found.
Integrated strategy for fast and automated molecular characterization of genes involved in craniosynostosis