[go″ne-om´ĕ-ter]
an instrument for measuring angles; the instrument used in goniometry. 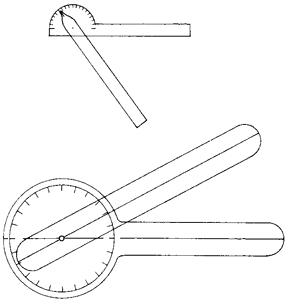 Two examples of universal goniometers commonly used by the clinician. From Kottke and Lehmann, 1990.
finger goniometer one for measuring the limits of flexion and extension of the joints between the phalanges of the fingers.

(gō'nē-om'ĕ-tĕr),
1. An instrument for measuring angles.
2. An applicance for the assessment of labyrinthine disease. It consists of an adjustable surface on which the patient reclines. As the surface is gradually tilted, the angle at which the patient experiences loss of balance is noted.
3. A calibrated device designed to measure the arc or range of motion of a joint. Synonym(s): arthrometer, fleximeter, pronometer
4. Device used to measure the amount of head turn in strabismus or nystagmus.
[G. gōnia, angle, + metron, measure]

(gō'nē-om'ĕ-tĕr)
1. An instrument for measuring joint angles.
2. An appliance used in the static test of labyrinthine disease. It consists of a plank, one end of which may be raised to any desired height; as one end of the plank is gradually raised, the point at which a patient reclining on the plank loses balance is noted.
3. A calibrated device used to measure the arc or range of motion of a joint.
Synonym(s): arthrometer, flexometer.
[G. gōnia, angle, + metron, measure] 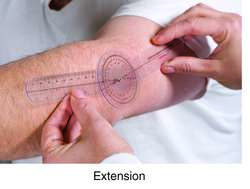 GONIOMETER: These goniometers are measuring a patient's elbow at extension and flexion 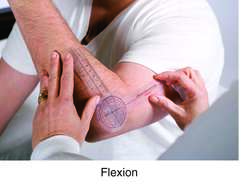