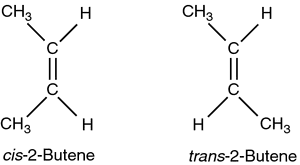 Stereoisomerism, exemplified by a pair of cis-trans diastereoisomers. From Dorland's, 2000.
Miller-Keane Encyclopedia and Dictionary of Medicine, Nursing, and Allied Health, Seventh Edition. © 2003 by Saunders, an imprint of Elsevier, Inc. All rights reserved.

Mirror-image molecular asymmetry. Also known as CHIRALITY. In the case of amino acids, the two forms are represented on paper with the carboxyl group of the carbon chain at the top. In the Laevo (L) form, the functional groups connected to the central carbon or carbon chain are shown as projecting to the left and in the dextro (D) form they are shown projecting to the right.
Collins Dictionary of Medicine © Robert M. Youngson 2004, 2005