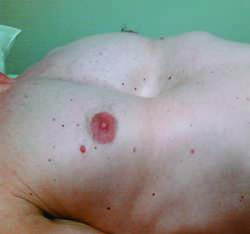 Feedback
Flashcards & Bookmarks ?
Please log in or register to use Flashcards and Bookmarks. You can also log in with
Flashcards ?
My bookmarks ?
+ Add current page to bookmarks
Mentioned in ?
References in periodicals archive ?
Meanwhile, after learning he's no longer in charge, Elliot decides to work on a young patient's concave chest.
RECORD tv; Something in the heir PICK OF THE DAY
The concave chest, the back hunched as if in anticipation of a blow.
Checkers
For example, here is how Raven first describes Count Dracula: aWithin the cloak all was leanness and angular bones, from the strangely sunken, almost concave chest down to the long, pale fingers and black-trousered legs.
Dracula
"If you roll too far back, you'll end in a pinched position; too far forward, and you have the concave chest problem," she says.
The shoulders
Jack has a secret--his concave chest (pectus excavatum)--about which he is so embarrassed that he refuses to take his shirt off, thus making his life very difficult as a member of the school rugby team.
Thamm, Shane: My Private Pectus
But soon afterwards Tony was stricken by rickets, which left him with a concave chest and a tendency to hang his neck forward, producing the trademark Hancock slouch.
Fantastic lives: THEN..
"Rob's determination, talent and supportive family have helped secure his continuing success as a swimmer even though he still has a concave chest from where the absentee lung should be."
You just get on with it. There are lots of people worse off than me who have achieved a lot more; Welsh swimmer with a single lung is still a real winner
Almost all the men look exactly the same: stick thin legs and arms, concave chests, and distended stomachs.
MORNINGSERIAL
The NTM patients also more frequently had concave chests, a condition known as pectus excavatum, and scoliosis, or curvature of the spine.
Tall, thin women more susceptible to Mycobacterial disease
The only thing they have in common is that they're both skinny, pale boys with concave chests. At least Eminem has a sense of humour in his videos and pokes fun at other music stars.
THE STREETS: JESSICA CALLAN wishes a sad case would lighten up
Button geeks were gathering and wearing as much campaign paraphernalia as they could fit on their concave chests. Members of the Young Americans for Freedom were handing out sophomoric flyers and trying to look like the cast of Reservoir Dogs.
Not ready for campaign time: an on-site dispatch from (argh) the 2000 GOP presidential race