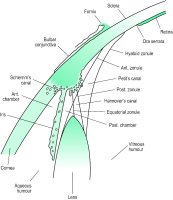 Feedback
Flashcards & Bookmarks ?
Please log in or register to use Flashcards and Bookmarks. You can also log in with
Flashcards ?
My bookmarks ?
+ Add current page to bookmarks
Mentioned in ?
References in periodicals archive ?
The martini glass is represented by triangular retrolental fibrovascular tissue and a central tissue stalk of hyaloid remnant extending to the optic disc in Cloquet's canal (see Figure 1a).
Persistent hyperplastic primary vitreous--the martini glass sign
Classic findings seen with posterior type include microphthalmos and a retrolental mass within the Cloquet's canal, often described as a "martini glass" or "wine glass" appearance, representing the persistent fibrovascular tissue that places traction on the retina causing detachment.
An infant with leukocoria: persistent fetal vasculature syndrome