[klor´o-plast]
the photosynthetic unit of a plant cell, containing all the chlorophyll.
Miller-Keane Encyclopedia and Dictionary of Medicine, Nursing, and Allied Health, Seventh Edition. © 2003 by Saunders, an imprint of Elsevier, Inc. All rights reserved. 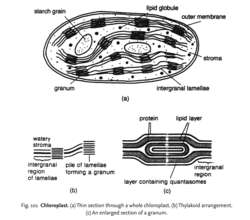 a type of PLASTID containing CHLOROPHYLL found within the cells of plant leaves and stems. The chlorophyll is packed within granules called quantasomes which are located in the walls of flattened sacs called LAMELLAE or thylakoids. The lamellae lie closely together in certain areas to form grana and are more separate in the intergranal regions. LIGHT REACTIONS of photosynthesis are thought to take place in the quantasomes while DARK REACTIONS occur in the watery matrix surrounding the lamellae, the stroma.
Collins Dictionary of Biology, 3rd ed. © W. G. Hale, V. A. Saunders, J. P. Margham 2005

Feedback
Flashcards & Bookmarks ?
Please log in or register to use Flashcards and Bookmarks. You can also log in with
Flashcards ?
My bookmarks ?
+ Add current page to bookmarks
Mentioned in ?
References in periodicals archive ?
Mizrachi found she could reliably predict - just by the initial reactions of the chloroplasts to the ROS signals - which cells would be dead a day later.
Weizmann Wonder Wander: Survival of the Fewest
However, in a stressful environment, chloroplasts send an alarm back to the cell nucleus using retrograde signalling (creating a chloroplast-to-nucleus communication feedback loop).
How plants cope with stress and damage?
After further analysis, the team unexpectedly found that GUN1 partners with another protein, MORF2 (an essential component of the plant RNA editing complex), to affect the efficiency of RNA editing during chloroplast-to-nucleus communication in damaged chloroplasts. Greater activity of MORF2 led to widespread editing changes as well as defects in chloroplast and leaf development even under normal growth conditions (see image).
Plants Are Also Stressed Out
crispata "clarki" ecotype has been investigated (Curtis et al., 2006, 2007; Pierce et al., 2006; Christa et al., 2014; Middlebrooks et al., 2014), the algal sources of the symbiotic chloroplasts in the E.
Algal Sources of Sequestered Chloroplasts in the Sacoglossan Sea Slug Elysia crispata Vary by Location and Ecotype
(2010) Chloroplasts divide by contraction of a bundle of nanofilaments consisting of polyglucan.
Dynamics of the nucleoside diphosphate kinase protein DYNAMO2 correlates with the changes in the global GTP level during the cell cycle of Cyanidioschyzon merolae
Effects of shading on leaf morphology and the ultrastructure of the chloroplasts in 'YinHong' grape leaves
Effects of shading on leaf physiology and morphology in the 'Yinhong' grape plants/Efeitos de sombra sobre a fisiologia da folha e a morfologia nas plantas de uva "Yinhong"
First, light incidence on the chloroplasts leads to fast redox activation of AGPase, which is fully reversed in the dark (Hendriks et al., 2003).
Effects of changes in micro-weather conditions on structural features, total protein and carbohydrate content in leaves of the Atlantic rain forest tree golden trumpet (Tabebuia chrysotricha)/ Efeito de alteracoes nas condicoes micro-climaticas sobre caracterfsticas estruturais, e protefna e carboidratos histoquimicamente marcados, de folhas da arvore da floresta Atlantica ipe amarelo
The endosymbiosis hypothesis was first proposed in the 1960s by biologist Lynn Margulis, who believed that organelles such as chloroplasts and mitochondria, the energy-producing organelles in all eukaryotic organisms, were originally free-living organisms that were conscripted into the bodies of larger cells.
It's an animal! It's a plant! No, it's an amazing acquired phototroph! Stealing parts from their prey, these hunters turn into farmers
With those two enzymes in balance, a chloroplast can still rid itself of excess energy but get back to full operations faster.
DNA edits boost photosynthesis: improving response to excess light may increase crop yields
Research carried out by a team at the University of Essex confirmed that iridoplasts performed better at photosynthesis than normal chloroplasts in very low light levels.
Why These Leaves Are An Iridescent Blue
In C3 plants, CO2 fixation and reduction via the Calvin cycle operates in the chloroplasts of mesophyll cells (MC), and the NADPH required for CO2 reduction also comes from MC.
Exogenous Malate Application Inhibits the Photochemical Activity of Photosystem II in Rice Leaves