Carpal tunnel syndrome is a disorder caused by compression at the wrist of the median nerve supplying the hand, causing numbness and tingling.

The carpal tunnel is an area in the wrist where the bones and ligaments create a small passageway for the median nerve. The median nerve is responsible for both sensation and movement in the hand, in particular the thumb and first three fingers. When the median nerve is compressed, an individual's hand will feel as if it has "gone to sleep."
Women between the ages of 30 and 60 have the highest rates of carpal tunnel syndrome. Research has demonstrated that carpal tunnel syndrome is a very significant cause of missed work days due to pain. In 1995, about $270 million was spent on sick days taken for pain from repetitive motion injuries.

Compression of the median nerve in the wrist can occur during a number of different conditions, particularly those conditions which lead to changes in fluid accumulation throughout the body. Because the area of the wrist through which the median nerve passes is very narrow, any swelling in the area will lead to pressure on the median nerve. This pressure will ultimately interfere with the nerve's ability to function normally. Pregnancy, obesity, arthritis, certain thyroid conditions, diabetes, and certain pituitary abnormalities all predispose to carpal tunnel syndrome. Other conditions which increase the risk for carpal tunnel syndrome include some forms of arthritis and various injuries to the arm and wrist (including fractures, sprains, and dislocations). Furthermore, activities which cause an individual to repeatedly bend the wrist inward toward the forearm can predispose to carpal tunnel syndrome. Certain jobs which require repeated strong wrist motions carry a relatively high risk of carpal tunnel syndrome. Injuries of this type are referred to as "repetitive motion" injuries, and are more frequent among secretaries doing a lot of typing, people working at computer keyboards or cash registers, factory workers, and some musicians.
Symptoms of carpal tunnel syndrome include numbness, burning, tingling, and a prickly pin-like sensation over the palm surface of the hand, and into the thumb, forefinger, middle finger, and half of the ring finger. Some individuals notice a shooting pain which goes from the wrist up the arm, or down into the hand and fingers. With continued median nerve compression, an individual may begin to experience muscle weakness, making it difficult to open jars and hold objects with the affected hand. Eventually, the muscles of the hand served by the median nerve may begin to grow noticeably smaller (atrophy), especially the fleshy part of the thumb. Untreated, carpal tunnel syndrome may eventually

The most severe cases of carpal tunnel syndrome may require surgery to decrease the compression of the median nerve and restore its normal function. This procedure involves severing the ligament that crosses the wrist, thus allowing the median nerve more room and decreasing compression.
(Illustration by Electronic Illustrators Group.)
result in permanent weakness, loss of sensation, or even paralysis of the thumb and fingers of the affected hand.

The diagnosis of carpal tunnel syndrome is made in part by checking to see whether the patient's symptoms can be brought on by holding his or her hand in position with wrist bent for about a minute. Wrist x rays are often taken to rule out the possibility of a tumor causing pressure on the median nerve. A physician examining a patient suspected of having carpal tunnel syndrome will perform a variety of simple tests to measure muscle strength and sensation in the affected hand and arm. Further testing might include electromyographic or nerve conduction velocity testing to determine the exact severity of nerve damage. These tests involve stimulating the median nerve with electricity and measuring the resulting speed and strength of the muscle response, as well as recording speed of nerve transmission across the carpal tunnel.

Carpal tunnel syndrome is initially treated with splints, which support the wrist and prevent it from flexing inward into the position which exacerbates median nerve compression. Some people get significant relief by wearing such splints to sleep at night, while others will need to wear the splints all day, especially if they are performing jobs which stress the wrist. Ibuprofen or other nonsteroidal anti-inflammatory drugs may be prescribed to decrease pain and swelling. When carpal tunnel syndrome is more advanced, injection of steroids into the wrist to decrease inflammation may be necessary.
The most severe cases of carpal tunnel syndrome may require surgery to decrease the compression of the median nerve and restore its normal function. Such a repair involves cutting that ligament which crosses the wrist, thus allowing the median nerve more room and decreasing compression. This surgery is done almost exclusively on an outpatient basis and is often performed without the patient having to be made unconscious. Careful injection of numbing medicines (local anesthesia) or nerve blocks (the injection of anesthetics directly into the nerve) create sufficient numbness to allow the surgery to be performed painlessly, without the risks associated with general anesthesia. Recovery from this type of surgery is usually quick and without complications.

Without treatment, continued pressure on the median nerve puts an individual at risk for permanent disability in the affected hand. Most people are able to control the symptoms of carpal tunnel syndrome with splinting and anti-inflammatory agents. For those who go on to require surgery, about 95% will have complete cessation of symptoms.

Prevention is generally aimed at becoming aware of the repetitive motions which one must make which could put the wrist into a bent position. People who must work long hours at a computer keyboard, for example, may need to take advantage of recent advances in "ergonomics," which try to position the keyboard and computer components in a way that increases efficiency and decreases stress. Early use of a splint may also be helpful for people whose jobs increase the risk of carpal tunnel syndrome.

Carpal tunnel — A passageway in the wrist, created by the bones and ligaments of the wrist, through which the median nerve passes.
Electromyography — A type of test in which a nerve's function is tested by stimulating a nerve with electricity, and then measuring the speed and strength of the corresponding muscle's response.
Median nerve — A nerve which runs through the wrist and into the hand. It provides sensation and some movement to the hand, the thumb, the index finger, the middle finger, and half of the ring finger.
Gale Encyclopedia of Medicine. Copyright 2008 The Gale Group, Inc. All rights reserved.

[kahr´p'l]
pertaining to the carpus, or wrist.
carpal tunnel syndrome a symptom complex resulting from compression of the median nerve in the carpal tunnel, with pain and burning or tingling paresthesias in the fingers and hand, sometimes extending to the elbow. The disorder is found most often in middle-aged women. Excessive wrist movements, arthritis, hypertrophy of the bone and connective tissue in acromegaly, and swelling of the wrist can produce the carpal tunnel syndrome. Treatment is usually conservative and consists of splinting the wrist to immobilize it for several weeks until the irritation of the median nerve has healed. In severe cases surgical resection of the carpal ligament is helpful. 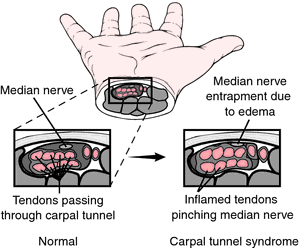 Carpal tunnel syndrome. Entrapment of the median nerve in the carpal tunnel space. From Frazier et al., 2000.
Miller-Keane Encyclopedia and Dictionary of Medicine, Nursing, and Allied Health, Seventh Edition. © 2003 by Saunders, an imprint of Elsevier, Inc. All rights reserved.

[MIM*115430]
the most common nerve entrapment syndrome, characterized by paresthesias, typically nocturnal, and sometimes sensory loss and wasting in the median nerve distribution in the hand; often bilateral and affects women more than men; due to chronic entrapment of the median nerve at the wrist within the carpal tunnel.
Farlex Partner Medical Dictionary © Farlex 2012

n.
A condition characterized by pain and numbing or tingling sensations in the hand and caused by compression of a nerve in the carpal tunnel at the wrist.
The American Heritage® Medical Dictionary Copyright © 2007, 2004 by Houghton Mifflin Company. Published by Houghton Mifflin Company. All rights reserved.
A syndrome of painful paraesthesiae of the median nerve, affecting hands and fingers, in particular index, middle and ring fingers, 2º to fibrous adhesions in the CT; it is most common in women; if prolonged, the CTS may result in partial atrophy of the lateral half of the thenar eminence with weakness of abduction and opposition of the thumb; it is either a chronic idiopathic flexor tenosynovitis, repetitive stress syndrome, or part of systemic conditions—e.g., acromegaly, amyloidosis, diabetes, granulomatous disease, hypothyroidism, mucopolysaccharidosis I-S, myxedema, obesity, pregnancy, or local processes, including ganglion cyst, bone dislocations, lipoma, callus formation in wrist fractures—e.g., Colles or Smith fractures—gout, pseudogout, and rheumatoid arthritis causing flexor tenosynovitis
Examination Phalen sign, Tinel sign
Diagnosis EMG is ‘gold standard’ test; detects decreased conduction velocity
DiffDx Proximal sites of nerve entrapment—e.g., Pancoast tumour, pronator teres syndrome
Treatment, early Wrist splint, NSAIDs, corticosteroid injection—e.g., beta-methasone—yoga
Treatment, late Longitudinal section of epineurium and flexor retinaculum for thenar atrophy
Segen's Medical Dictionary. © 2012 Farlex, Inc. All rights reserved.

(kahr'păl tŭn'ĕl sin'drōm)
A common nerve entrapment syndrome, characterized by hand paresthesia and pain, and sometimes sensory loss and wasting of muscle in the median nerve distribution; caused by entrapment of the median nerve at the wrist, within the carpal tunnel.
Medical Dictionary for the Health Professions and Nursing © Farlex 2012

The result of any swelling occurring within the CARPAL TUNNEL. There is compression of the median nerve causing pain, numbness and tingling in one half of the hand, on the thumb side. The condition is commonest in middle aged women and may require injections of steroids or surgical decompression. Ultrasound treatment has also been used.
Collins Dictionary of Medicine © Robert M. Youngson 2004, 2005

(kahr'păl tŭn'ĕl sin'drōm) [MIM*115430]
Most common nerve entrapment syndrome, characterized by sensory loss and wasting in the median nerve distribution in the hand; due to chronic entrapment of median nerve at wrist within carpal tunnel.
Medical Dictionary for the Dental Professions © Farlex 2012

A. I have found that MSM (GNC brand) 1500mg per day works for me. I talked to an Orthopedic Surgeon asking him why it works... he said "they really don't know why it works, but it works for many of my patients". When I stop taking my MSM the symptoms return so it is not a cure.

I have tried other brands of MSM and found the GNC brand works the best for me. It takes about 2 weeks to begin to see the results and several more weeks to get the full affect.

Q. what can i do to help my capentunnel without surgery?

A. a good friend of mine is a bike racer and did the surgery- it's not a bad solution as it seems...but you can try and put on a splint to stabilize the wrist. The splint is worn at night for several weeks. If this does not help, you may need to wear the splint during the day. Hot and cold compresses may also be recommended.

There are many ergonomic devices that can be used in the workplace to reduce the stress placed on the wrist. These include special keyboards, cushioned mouse pads, and keyboard drawers. Make sure the keyboard is low enough so that the wrists aren't bent upward during typing. You may also need to make changes in your work duties or recreational activities.
More discussions about carpal tunnel syndrome
This content is provided by iMedix and is subject to iMedix Terms. The Questions and Answers are not endorsed or recommended and are made available by patients, not doctors.