[kap´ĭ-lar″e]
1. pertaining to or resembling a hair.
2. in the circulatory system, one of the minute vessels connecting arterioles and venules, the walls of which act as a semipermeable membrane for interchange of various substances between the blood and tissue fluid. Capillary walls consist of thin endothelial cells through which body fluids and dissolved substances can pass. At the arterial end, the blood pressure within the capillary is higher than the pressure in the surrounding tissues, and the blood fluid and some dissolved substances pass outward through the capillary wall. At the venous end, the pressure within the tissues is higher and waste material and fluids from the tissues pass into the capillary, to be carried away for disposal. 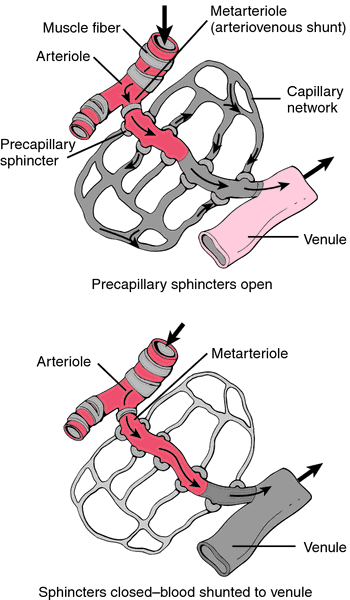 (kăp′ə-lĕr′ē)
adj.
1. Relating to or resembling a hair; fine and slender.
2. Having a very small internal diameter: a capillary tube.
3. Anatomy Of or relating to the capillaries.
4. Physics Of or relating to capillarity.
n. pl. capillar·ies
1. Anatomy One of the minute blood vessels that connect arterioles and venules. These blood vessels form an intricate network throughout the body for the interchange of various substances, such as oxygen and carbon dioxide, between blood and tissue cells.
2. A tube with a very small internal diameter.

Any of the microscopic blood vessels that connect minute arterioles and equally minute venules. Capillaries form a network throughout the body and are the functional unit of general circulation. Capillary walls are semipermeable and allow passage of O2, glucose and other nutrients from the blood into the cells, and waste products (CO2, NH3) into the blood to be excreted or eliminated through the lungs.

(kap′ĭ-ler″ē) plural.capillaries [L. capillaris, hairlike]
1. Any of the minute blood vessels, averaging 0.008 mm in diameter, that connect the ends of the smallest arteries (arterioles) with the beginnings of the smallest veins (venules).
2. Pert. to a hair; hairlike.

One of the very small vessels that are the terminal branches of the arterioles or metarterioles.

One of the intercellular biliary passageways that convey bile from liver cells to the interlobular bile ducts. Also called bile canaliculus.

One of the minute blood vessels that convey blood from the arterioles to the venules and form an anastomosing network that brings the blood into intimate relationship with the tissue cells. Its wall consists of a single layer of squamous cells (endothelium) through which oxygen diffuses to the tissue and products of metabolic activity enter the bloodstream. Blood capillaries average about 8 μm in diameter. 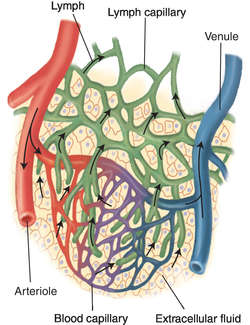 Any of the very small canaliculi that are part of the secretory outflow path receiving secretion discharged from gland cells.

One of the minute vessels that convey blood from a capillary network into the small veins (venules).

The smallest and most numerous of all the blood vessels. Capillaries form dense networks between the arteries and the veins, and it is only in the capillary beds that interchange of oxygen, carbon dioxide and nutrients can take place with the cells. 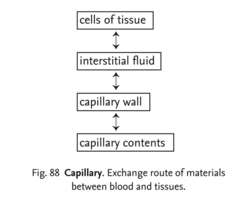 Fig. 88 Capillary . Exchange route of materials between blood and tissues.

Fig. 87 Capillary . The structure of a capillary vessel.

one of many minute blood vessels (5–20 μm diameter) which connect ARTERIOLES and VENULES in vertebrate tissues allowing a high level of exchange of materials to take place between blood and tissues via the interstitial fluid or LYMPH. See Fig. 87 . Capillary walls are made up of a single layer of epithelial cells which are flexible, allowing changes in diameter with changing blood pressure. See Fig. 88 . Capillaries are efficient because

The tiniest blood vessels with the smallest diameter. These vessels receive blood from the arterioles and deliver blood to the venules.
Mentioned in: Preeclampsia and Eclampsia