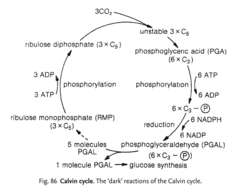 a series of chemical reactions, first described by Melvin CALVIN, which take place in the watery matrix of CHLOROPLASTS, where carbon dioxide is incorporated into more complex molecules and eventually carbohydrate. Energy for the reactions is supplied by ATP with NADPH (see NADP acting as a reducing agent, both having been produced in the light reactions of PHOTOSYNTHESIS. Since light is not required for the Calvin cycle to continue (provided CO2 ,ATP and NADPH are present) the steps are called the ‘dark’ reactions.