[hem´ĭ-sfēr]
half of a spherical or roughly spherical structure or organ.
cerebral hemisphere one of the paired structures constituting the largest part of the brain, which together comprise the extensive cerebral cortex, centrum semiovale, basal ganglia, and rhinencephalon, and contain the lateral ventricle. See also brain.
cerebellar hemisphere either of the paired portions of the cerebellum lateral to the vermis.
dominant hemisphere the cerebral hemisphere that is more concerned than the other in the integration of sensations and the control of many functions. See also laterality.
Miller-Keane Encyclopedia and Dictionary of Medicine, Nursing, and Allied Health, Seventh Edition. © 2003 by Saunders, an imprint of Elsevier, Inc. All rights reserved.

[TA]
the large mass of the telencephalon, on either side of the midline, consisting of the cerebral cortex and its associated fiber systems, together with the deeper-lying subcortical telencephalic nuclei (that is, basal nuclei [ganglia]).
Synonym(s): hemispherium cerebri [TA]
Farlex Partner Medical Dictionary © Farlex 2012

(ser'ĕ-brăl hem'is-fēr') [TA]
1. Synonym(s): hemisphere.
2. The large mass of the telencephalon, on either side of themidline, consisting of the cerebral cortex and its associated fiber systems, together with the deeper-lying subcortical telencephalic nuclei(i.e., basal ganglia [nuclei]).
Synonym(s): hemispherium (1) .
Medical Dictionary for the Health Professions and Nursing © Farlex 2012 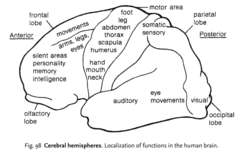 Fig. 98 Cerebral hemispheres . Localization of functions in the human brain.

one of a pair of large lobes in the forebrain of vertebrates. In reptiles, birds and mammals the coordinating function is dominant and the cerebral hemispheres control most of the activities of the animals, whereas in lower vertebrates the hemispheres are associated mainly with the sense of smell. In mammals the enlargements of the cerebral hemispheres, the largest part of the BRAIN, are caused by the development of the NEOPALLIUM (part of the CEREBRAL CORTEX) which forms the entire roof and sides of the forebrain. The frontal lobes are particularly developed in humans and are the seat of memory, thought and a considerable part of what is considered to be intelligence.
Collins Dictionary of Biology, 3rd ed. © W. G. Hale, V. A. Saunders, J. P. Margham 2005

(ser'ĕ-brăl hem'is-fēr') [TA]
Large mass of telencephalon, on either side of midline, consisting of the cerebral cortex and its associated fiber systems, together with the deeper-lying subcortical telencephalic nuclei (i.e., basal nuclei [ganglia]).
Medical Dictionary for the Dental Professions © Farlex 2012

Feedback
Flashcards & Bookmarks ?
Please log in or register to use Flashcards and Bookmarks. You can also log in with
Flashcards ?
My bookmarks ?
+ Add current page to bookmarks
Mentioned in ?
References in periodicals archive ?
In this study, the radiation brain injury model of rats in one side of brain hemisphere was successfully established using single-dose exposure for long-term brain tissue monitoring after radiation.
Long-term Brain Tissue Monitoring after Semi-brain Irradiation in Rats Using Proton Magnetic Resonance Spectroscopy: A Preliminary Study In vivo
Gordon, is used to measure brain hemisphere differences in participants prior to the psi task.
Cerebral hemisphere dominance and ESP performance in the autoganzfeld
Although the research does point to differences in the information-processing abilities and biases of the brain hemispheres, those differences are found at a finer level of analysis than "spatial reasoning." It makes no sense to claim that spatial reasoning is a right-hemisphere task.
In Search of . . . Brain-Based Education
If you scan the library, the subject title is "brain hemispheres," but most books are too technical.
Right side/left side
Also, the corpus callosum 6 the bundle of nerve cells connecting the two brain hemispheres 6 tends to be (http://science.sciencemag.org/content/229/4714/665.long) larger in left-handers .
Are Left-Handed People More Gifted?
The remaining 12 (7%) did not fit any of the stereotypical or variant profiles in either brain hemisphere. Estimated Braak stage was significantly associated with amyloid status, diagnostic category,
In vivo tau imaging correlated with Braak stages in AD
A theory, brought forth in the 1980's by US neurologists Norman Geschwind and Albert Galaburda, posits that testosterone delays the maturation of the left brain hemisphere during embryonic development.
Left-handed people are generally born in winter
"Brain Hemisphere Dominance: Building the Whole-Brain Singer." DM dissertation, Florida State University, 2012, 56 pages; AAT 3519282.
Recent research in singing
ERIC Descriptors: Foreign Countries; College Students; Short Term Memory; Japanese; Native Speakers; Long Term Memory; Reading Tests; Form Classes (Languages); Brain Hemisphere Functions; Brain; Cognitive Processes; Neuropsychology; Language Processing; Semantics; Vocabulary Development
Effects of Differences in Working Memory Capacity on Patterns of Word Generation
Since the monkeys could track about two objects on each side of the screen, this means the magic number of four is really a sum: two objects tracked by each brain hemisphere.
Brain separates working memory: Hemispheres independent in mental version of RAM
Researchers recruited 60 middle-age patients who had suffered ischemic strokes (blockage of blood flow to the brain) that had damaged one brain hemisphere and caused paralysis down one side of the body.
Transcranial magnetic stimulation: innovative treatment for brain Ills: weak electric currents induced by TMS may help the brain with stroke recovery, migraines, and depression
ABSTRACT: The CL1-Ganzfeld study was designed to examine the relationship between brain hemisphere differences and ESP performance in the ganzfeld, particularly how the right hemisphere may interact with psi abilities.
CL1-GANZFELD STUDY: A LOOK AT BRAIN HEMISPHERE DIFFERENCES AND SCORING IN THE AUTOGANZFELD