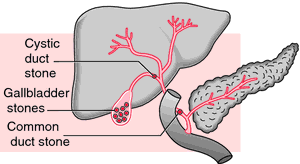 Common anatomic locations of gallstones. From Malarkey and McMorrow, 2000.
Miller-Keane Encyclopedia and Dictionary of Medicine, Nursing, and Allied Health, Seventh Edition. © 2003 by Saunders, an imprint of Elsevier, Inc. All rights reserved.

(gawl'stōn),
A concretion in the gallbladder or a bile duct, composed chiefly of a mixture of cholesterol, calcium bilirubinate, and calcium carbonate, occasionally as a pure stone composed of just one of these substances.
Synonym(s): biliary calculus, cholelith
Farlex Partner Medical Dictionary © Farlex 2012

(gawl'stōn)
A concretion in the gallbladder or a bile duct, composed chiefly of a mixture of cholesterol, calcium bilirubinate, and calcium carbonate, occasionally as a pure stone composed of just one of these substances.
Synonym(s): cholelith.
Medical Dictionary for the Health Professions and Nursing © Farlex 2012 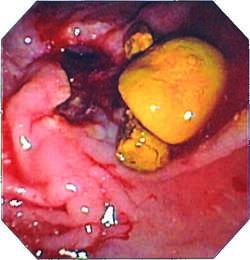 Ursodiol (ursodeoxycholic acid), taken orally, is sometimes effective in treating cholesterol gallstones. Treatment may need to be continued for 1 year. A similar agent, chenodiol, is no longer available as it caused unacceptable incidence of hepatotoxicity.
Medical Dictionary, © 2009 Farlex and Partners

More discussions about gallstone
This content is provided by iMedix and is subject to iMedix Terms. The Questions and Answers are not endorsed or recommended and are made available by patients, not doctors.