[brong´ke-ōl]
one of the successively smaller channels into which the segmental bronchi divide within the bronchopulmonary segments. adj., adj bronchi´olar.
respiratory b's the final branches of the bronchioles, communicating directly with the alveolar ducts; they are subdivisions of terminal bronchioles, have alveolar outcroppings, and themselves divide into several alveolar ducts. 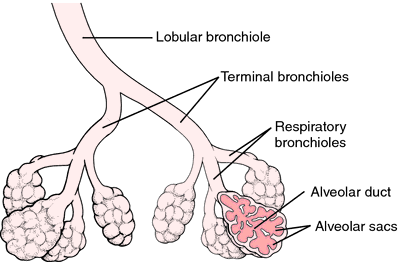 Respiratory bronchiole. From Dorland's 2000.
( and see color plates.)
terminal bronchiole the last portion of a bronchiole that does not contain alveoli, i.e., one whose sole function is gas conduction; it subdivides into respiratory bronchioles.
Miller-Keane Encyclopedia and Dictionary of Medicine, Nursing, and Allied Health, Seventh Edition. © 2003 by Saunders, an imprint of Elsevier, Inc. All rights reserved.

(brong'kē-ōl), [TA]
One of approximately six generations of increasingly finer subdivisions of the bronchi, all smaller than 1 mm in diameter, and having no cartilage in its wall, but relatively abundant smooth muscle and elastic fibers.
Synonym(s): bronchiolus [TA]
Farlex Partner Medical Dictionary © Farlex 2012

A conducting airway which begins at the last cartilaginous plate and ends at the last ciliated epithelial cell; bronchioli are any of 7–9 increasingly finer subdivisions of the bronchiolar tree (BT), measuring < 1 mm in diameter. In the distal BT, the respiratory epithelium becomes flatter, the ciliated cells fewer in number, the mucous glands less prominent and eventually disappear and, in the purely respiratory bronchioles, cuboidal nonciliated non-mucus-producing Clara cells appear.

Bronchiole types
Respiratory bronchiole bronchiolus respiratorius MNA6
Any of 1–3 generations of ≤ 0.5-mm airways that connect terminal bronchioli to the alveolar ducts. Alveoli arise directly from the wall of RBs; the most distal RB is histologically characterised by an air space lined on one side by respiraotory epithelium and on the other by alveoli.

(brong'kē-ōl)
One of approximately six generations of increasingly finer subdivisions of the bronchi, each smaller than 1 mm in diameter, and having no cartilage in its wall, but relatively abundant smooth muscle and elastic fibers.
Synonym(s): bronchiolus [TA] .
Medical Dictionary for the Health Professions and Nursing © Farlex 2012

One of the many thin-walled, tubular branches of the bronchi, which extend the airway to the terminal air sacs (alveoli). Bronchi have cartilaginous rings, bronchioles do not.
Collins Dictionary of Medicine © Robert M. Youngson 2004, 2005

one of the smaller tubes branching off the two main bronchii in the lungs of higher vertebrates. See BREATHING and Fig. 81 .
Collins Dictionary of Biology, 3rd ed. © W. G. Hale, V. A. Saunders, J. P. Margham 2005

A thin air passage in the lung that branches off a larger airway.
Mentioned in: Bronchiolitis
Gale Encyclopedia of Medicine. Copyright 2008 The Gale Group, Inc. All rights reserved.

(brong'kē-ōl)
One of approximately six generations of increasingly finer subdivisions of the bronchi, all smaller than 1 mm in diameter.
Medical Dictionary for the Dental Professions © Farlex 2012