A disc, half black and half white with a number of concentric black bars on the white half which when rotated evokes a sensation of colour, called Fechner's colours or Fechner-Benham colours (Fig. B2). Syn. Benham-Fechner top. 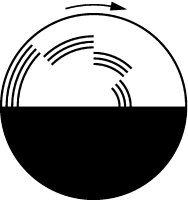 Feedback
Flashcards & Bookmarks ?
Please log in or register to use Flashcards and Bookmarks. You can also log in with
Flashcards ?
My bookmarks ?
+ Add current page to bookmarks
Mentioned in ?
References in periodicals archive ?
The dark purple backdrop of the booth itself can be very eye-catching, but when you add a spinning Benham Disc, a pile of newly-designed brochures, and three energetic young women, you have a combination that not many English teachers wanted to pass up.
Report from the national council of teachers of English annual convention