(bel pawl'zē)
Paresis or paralysis, usually unilateral, of the facial muscles, caused by dysfunction of the seventh cranial nerve; probably due to a viral infection; usually demyelinating in type.
Synonym(s): peripheral facial paralysis.
Medical Dictionary for the Health Professions and Nursing © Farlex 2012 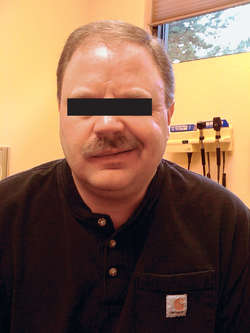 Paralysis of the facial nerve. Bell palsy is usually caused by a reactivation of herpes simplex virus although other infections (such as syphilis or Lyme disease) are sometimes implicated. Complications may include corneal drying and ulceration and mild dysarthria. Either side of the face may be affected. Attacks recur in about 10% of cases. Synonym: Bell paralysisfacial palsy; facial nerve palsy; facial nerve paralysis; facial paralysis

Paralysis of the facial nerve typically results in an asymmetrical facial appearance. The affected patient is unable to raise one side of the mouth to smile or to wrinkle or raise the eyebrow on the same side. This peripheral nerve dysfunction is distinguished from strokes that alter facial movement by the involvement of both the forehead and the mouth. Paralysis of the face caused by strokes usually only limits movement of the oral muscles. See: illustration

Tapering doses of prednisone without antiviral drugs provide the most effective results. In addition, the affected eye should be protected from drying with artificial tears or unmedicated ointments. Some practitioners advise wearing sunglasses during the palsy or patching the eye to protect it from foreign bodies or drying.

Partial facial paralysis is usually resolved within several months. The likelihood of complete recovery after total paralysis varies from 20% to 90%.

(bel pawl'zē)
Paresis or paralysis, usually unilateral, of the facial muscles, caused by dysfunction of the facial nerve.
Medical Dictionary for the Dental Professions © Farlex 2012

Feedback
Flashcards & Bookmarks ?
Please log in or register to use Flashcards and Bookmarks. You can also log in with
Flashcards ?
My bookmarks ?
+ Add current page to bookmarks
Mentioned in ?
References in periodicals archive ?
Although we could not rule out the possibility that our patient's disease entity was Bell palsy with an incidental finding of a cystic lesion in the temporal bone, the imaging studies--CT and MRI scans of the temporal bone--provided beneficial information on the diagnosis and treatment of facial nerve palsy in our patient.
Facial nerve palsy associated with a cystic lesion of the temporal bone
(1) Clinical manifestations of such include otitis media and Bell palsy.
Recurrent pre-B-cell acute lymphoblastic leukemia in the middle ear: a form of granulocytic sarcoma
The authors performed a retrospective review of data obtained in 11 patients who were treated at a university-based referral practice between July 1988 and September 2001 and who presented with acute facial nerve paralysis mimicking Bell palsy. All patients were subsequently found to harbor an occult skull base neoplasm.
Although Bell palsy remains the most common cause of peripheral facial nerve paralysis, patients in whom neoplasms invade the facial nerve may present with acute paralysis mimicking Bell palsy that fails to resolve.
Bell palsy can be defined as an acute, unilateral, lower motor neuron facial paresis or paralysis, in which no other cause can be identified.
Eleven of these 320 cases met the criteria of the study--namely, presentation with facial paralysis mimicking Bell palsy that was found to be caused by an occult malignancy, The records of these patients were retrospectively reviewed.
After a diagnosis of Bell palsy was reached, he had been referred to us for treatment.
After a diagnosis of Bell palsy was reached, he was referred to us for treatment.
He had apparently been told he had a right-sided Bell palsy. In 1977, he had sustained a burn injury on the right side of his face and pinna.
In cases of neoplastic invasion of the facial nerve, patients may present with acute facial paralysis or paresis mimicking Bell palsy. Bell palsy remains a diagnosis of exclusion and is best made after a thorough otolaryngological examination demonstrates no evidence of occult malignancy.
Facial paralysis caused by malignant skull base neoplasms. (Special Feature)