(bahr'tō-lĭn),
1. ducts of one of the major salivary glands, the sublingual gland. [anat. usage note term is used erroneously for the ducts of the female greater vestibular (Bartholin) glands.]
2. ducts of the Bartholin glands of the male and female urethras.

(bahr'tō-lin dŭkt)
Large duct draining the sublingual gland and opening into the Wharton duct or near it. 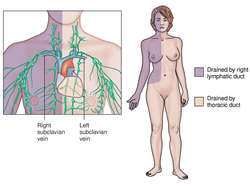 In the embryo, the duct leading from the mesonephros to the cloaca. From it develop the ductus epididymis, ductus deferens, seminal vesicle, ejaculatory duct, ureter, and pelvis of the kidney.
Synonym: mesonephric duct

(bahr'tō-lin dŭkt)
Ducts of one of the major salivary glands, the sublingual gland.