[bar″o-re-sep´ter]
a sensory nerve terminal that is stimulated by changes in pressure, as those in blood vessel walls. Called also baroceptor and pressoreceptor.

(bar'ō-rē-sep'ter, -tōr),
1. In general, any sensor of pressure changes.
2. Sensory nerve ending in the wall of the atrium of the heart, vena cava, aortic arch, and carotid sinus, sensitive to stretching of the wall resulting from increased pressure from within and functioning as the receptor of central reflex mechanisms that tend to reduce that pressure.
Synonym(s): baroceptor, pressoreceptor
[G. baros, weight, + receptor]

(băr′ō-sĕp′tər)
n.
A sensory nerve ending in the walls of the auricles of the heart, vena cava, carotid sinus, and aortic arch, sensitive to stretching of the wall due to increased pressure from within, and functioning as the receptor of reflex mechanisms that tend to reduce that pressure.

(băr′ə-rĭ-sĕp′tər)
n.
A sensory nerve ending that is stimulated by changes in pressure, especially one in the walls of blood vessels such as the carotid sinus.

A cluster of mechanoreceptors in the atrium, vena cava, aortic arch and carotid sinus, which are sensitive to tissue stretching that occurs with increased intravascular pressure; baroreceptor information passes to the brainstem from the carotid sinus via the glossopharyngeal nerve and from the aortic arch and great vessels of the thorax via the vagal nerve.

(bar'ō-rĕ-sep'tŏr)
1. In general, any sensor of pressure changes.
2. Sensory nerve ending in the cardiac atria, vena cava, aortic arch, and carotid sinus, sensitive to stretching of the wall resulting from increased pressure from within, and functioning as the receptor of central reflex mechanisms that tend to reduce that pressure.
Synonym(s): baroceptor, pressoreceptor.
[G. baros, weight, + receptor] 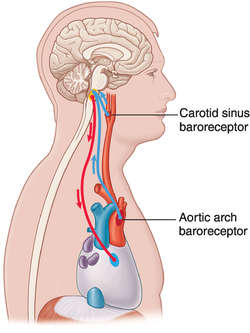 BARORECEPTOR
A sensory nerve ending stimulated by changes in pressure. Baroreceptors are found in the walls of the cardiac atria, the vena cava, aortic arch. The baroreceptors of the lung are stretch receptors that are stimulated by inflation. Synonym: barostat; pressoreceptor See: illustration

A nerve ending which produces an output when there is a change in ambient pressure. Also known as baroceptor.

a pressure RECEPTOR that responds to changes in blood pressure, found particularly in the carotid sinus and aortic arch.

Feedback
Flashcards & Bookmarks ?
Please log in or register to use Flashcards and Bookmarks. You can also log in with
Flashcards ?
My bookmarks ?
+ Add current page to bookmarks
TheFreeDictionary presents:
Write what you mean clearly and correctly.
Mentioned in ?
References in periodicals archive ?
In addition, impairment of baroreceptor function may act as a permissive element in the establishment of primary alterations in other mechanisms of cardiovascular function control, since it does not modulate sympathetic and parasympathetic activity adequately (23), which impairs the reestablishment of autonomic cardiovascular control during and after exercise since the sympathetic activity decreases and the parasympathetic activity increases during exercise recovery.
High-Intensity Interval Aquatic Exercise Session Promotes Post-Exercise Hypotension in Hypertensive Elderly: A Randomized Controlled Trial
ADNA and MAP were used to construct baroreceptor afferent function curves using logistic sigmodal function.
SOD1 Overexpression Preserves Baroreflex Control of Heart Rate with an Increase of Aortic Depressor Nerve Function
[sup][12] Hypertension usually peaks in the first few hours after surgery and is related to impaired baroreceptor function.
Prediction of Cerebral Hyperperfusion Syndrome with Velocity Blood Pressure Index
Arterial baroreceptor information affects striatal dopamine release measured by voltammetry in rats.
Evaluation of GABA receptors of ventral tegmental area in cardiovascular responses in rat
He further explained that if their hypothesis is proven right then arterial stiffness and baroreceptor signaling will become hotspot targets for the treatment of high blood pressure and the development of new medicines and medical devices.
'Virtual human' reveals stiff arteries could be behind high blood pressure
They are believed to arise from pericytes of Zimmermann, which are baroreceptors found on blood vessel walls.
Endoscopic modified Lothrop approach for the excision of bilateral frontal sinus tumors
Recent studies in our laboratory have shown that selective denervation of carotid baroreceptors [10] or inactivation of the carotid chemoreceptors [11] abolished the recovery of blood pressure induced by HSI in hemorrhagic rats.
Median preoptic nucleus mediates the cardiovascular recovery induced by hypertonic saline in hemorrhagic shock
[24] Heart rate varies with respiration (sinus arrhythmia), increasing during inspiration and decreasing during expiration mainly due to the parasympathetic innervation of the heart, the pulmonary stretch receptors, cardiac mechanoreceptors and baroreceptors. [24] The Valsalva ratio assesses the parasympathetic function more than the sympathetic function as the parasympathetics are both the afferents and the efferents while the sympathetics are part of the efferents.
Autonomic function in adults with obstructive sleep Apnea
During this two suggested probable mechanisms for this sympatho-vagal imbalance: Chronic nicotine (tobacco) abuse leads to a restricted sensitivity of the afferent baroreceptors or directly restricts the baroreflex-centers in the brain stem [7].
Effect of co-administration of morphine and nicotine on cardiovascular function in two-kidney one clip hypertensive (2K1C) rats
The arterial hypertension stimulates the carotid baroreceptors, and the sinus rate is reflexly slowed, which in this patient allowed the junctional escape rhythm to emerge.
Electrocardiogram in an attempted suicide
Raisoed blood pressure is sensed by baroreceptors in the aortic arch and carotid bodies.
Autonomic dysreflexia in spinal cord injury patients: an overview
The system works by electrically activating the baroreceptors located in the carotid artery, the body's natural blood pressure sensors that regulate cardiovascular function.
CVRx creates chief commercial officer position