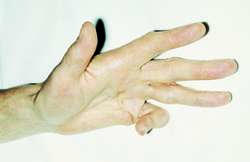 Contracture of palmar fascia usually causing the ring and little fingers to bend into the palm so that they cannot be extended. This condition tends to occur in families, after middle age, and more frequently in men. There is no correlation between occupation and development of this condition. It is associated with liver disease and long-term use of phenytoin. See: illustration

The cause is unknown.

The tissue causing the contracture is removed surgically.

Baron Guillaume, French surgeon and surgical pathologist, 1777-1835.
Dupuytren amputation - amputation of the arm at the shoulder joint.
Dupuytren canal - one of the veins in the diploë of the cranial bones. Synonym(s): diploic vein
Dupuytren contracture - a disease of the palmar fascia resulting in thickening and shortening of fibrous bands on the palmar surface of the hand and fingers.
Dupuytren diathesis
Dupuytren disease of the foot - nodular fibroblastic proliferation in plantar fascia of one or both feet. Synonym(s): plantar fibromatosis
Dupuytren enterotome
Dupuytren exostosis
Dupuytren fascia - the thickened, central portion of the fascia ensheathing the hand. Synonym(s): palmar aponeurosis
Dupuytren fracture - fracture of lower part of fibula, with dislocation of ankle. Synonym(s): Pott I syndrome
Dupuytren hydrocele - bilocular hydrocele in which the sac fills the scrotum and also extends into the abdominal cavity beneath the peritoneum.
Dupuytren knife
Dupuytren operation
Dupuytren sign - (1) in congenital dislocation, free up-and-down movement of the head of the femur occurring upon intermittent traction; - (2) a crackling sensation on pressure over the bone in certain cases of sarcoma.
Dupuytren splint
Dupuytren suture - a continuous Lembert suture.
Dupuytren tourniquet - an instrument for compression of the abdominal aorta.
Medical Eponyms © Farlex 2012