(Ba) [bar´e-um]
a chemical element, atomic number 56, atomic weight 137.34. (See Appendix 6.) Ingestion of excessive amounts can be toxic, occasionally resulting in fatal hypokalemia and paralysis.
barium sulfate a water-insoluble salt used as an opaque contrast medium for x-ray examination of the digestive tract.
barium test x-ray examination using a barium mixture to help locate disorders in the esophagus, stomach, duodenum, and small and large intestines. Such conditions as peptic ulcer, benign or malignant tumors, colitis, or enlargement of organs that might be causing pressure on the stomach may be readily identified with the use of barium tests. If perforation exists or is suspected, the barium test should not be administered. It is important to evacuate the barium completely following the study; a mild laxative is usually prescribed for this purpose.

Barium sulfate is a harmless chalky, water-insoluble compound that does not permit x-rays to pass through it. Taken before or during an examination, it causes the intestinal tract to stand out in silhouette when viewed through a fluoroscope or seen on an x-ray film. 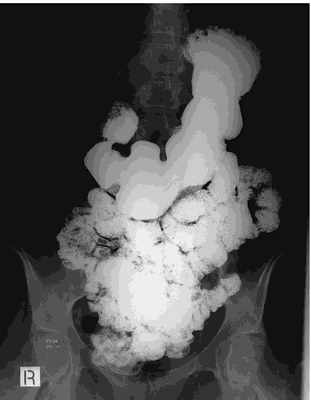 Chemistry
A silver-white alkaline earth-metallic element—atomic number 56, atomic weight 137.3—which melts at 727ºC. Pure barium does not exist in nature as it is oxidised, often as baryta.

A chemical used in certain radiological studies to enhance visualization of anatomical structures.
Mentioned in: Intussusception

Feedback
Flashcards & Bookmarks ?
Please log in or register to use Flashcards and Bookmarks. You can also log in with
Flashcards ?
My bookmarks ?
+ Add current page to bookmarks
TheFreeDictionary presents:
Write what you mean clearly and correctly.
Mentioned in ?
References in periodicals archive ?
Eating or drinking very large amounts of barium compounds that easily dissolve can cause changes in heart rhythm or paralysis and possibly death.
The National Institute for Occupational Safety and Health (NIOSH) has set Recommended Exposure Limits (RELs) of 0.5 mg/[m.sup.3] for soluble barium compounds. The NIOSH has set RELs of 10 mg/[m.sup.3] (total dust) for barium sulfate and 5 mg/[m.sup.3] (respirable fraction).
Barium and Health