Astigmatism is the result of an inability of the cornea to properly focus an image onto the retina. The result is a blurred image.

The cornea is the outermost part of the eye. It is a transparent layer that covers the colored part of the eye (iris), pupil, and lens. The cornea bends light and helps to focus it onto the retina where specialized cells (photo receptors) detect light and transmit nerve impulses via the optic nerve to the brain where the image is formed. The cornea is dome shaped. Any incorrect shaping of the cornea results in an incorrect focusing of the light that passes through that part of the cornea. The bending of light is called refraction and focusing problems with the cornea are called diseases of refraction or refractive disorders. Astigmatism is an image distortion that results from an improperly shaped cornea. Usually the cornea is spherically shaped, like a baseball. However, in astigmatism the cornea is elliptically shaped, more like a football. There is a long meridian and a short meridian. These two meridians generally have a constant curvature and are generally perpendicular to each other

Astigmatism can be treated by the use of cylindrical lenses. The lenses are shaped to counteract the shape of the sections of the cornea that are causing the difficulty.
(Illustration by Electronic Illustrators Group.)
(regular astigmatism). Irregular astigmatism may have more than two meridians of focus and they may not be 908 apart. A point of light, therefore, going through an astigmatic cornea will have two points of focus, instead of one nice sharp image on the retina. This will cause the person to have blurry vision. What the blur looks like will depend upon the amount and the direction of the astigmatism. A person with nearsightedness (myopia) or farsightedness (hyperopia) may see a dot as a blurred circle. A person with astigmatism may see the same dot as a blurred oval or frankfurter-shaped blur.
Some cases of astigmatism are caused by problems in the lens of the eye. Minor variations in the curvature of the lens can produce minor degrees of astigmatism (lenticular astigmatism). In these patients, the cornea is usually normal in shape. Infants, as a group, have the least amount of astigmatism. Astigmatism may increase during childhood, as the eye is developing.

The main symptom of astigmatism is blurring. People can also experience headaches and eyestrain. Parents can notice that a child may have astigmatism when the child can see some part of a pattern or picture more clearly than others. For example, lines going across may seem clearer than lines going up and down.
Regular astigmatism can be caused by the weight of the upper eyelid resting on the eyeball creating distortion, surgical incisions in the cornea, trauma or scarring to the cornea, the presence of tumors in the eyelid, or a developmental factor. Irregular astigmatism can be caused by scarring or keratoconus. Keratoconus is a condition in which the cornea thins and becomes cone shaped. It usually occurs around puberty and is more common in women. Although the causes of keratoconus are unknown, it may be hereditary or a result of chronic eye rubbing, as in people with allergies. The center of the cone may not be in line with the center of the cornea. Diabetes can play a role in the development of astigmatism. High blood sugar levels can cause shape changes in the lens of the eye. This process usually occurs slowly and, often, is only noticed when the diabetic has started treatment to control their blood sugar. The return to a more normal blood sugar allows the lens to return to normal and this change is sometimes noticed by the patient as farsightedness. Because of this, diabetics should wait until their blood sugar is under control for at least one month to allow vision to stabilize before being measured for eyeglasses.

Patients seek treatment because of blurred vision. A variety of tests can be used to detect astigmatism during the eye exam. The patient may be asked to describe the astigmatic dial, a series of lines that radiate outward from a center. People with astigmatism will see some of the lines more clearly than others. One diagnostic instrument used is the keratometer. This measures the curvature of the central cornea. It measures the amount and direction of the curvature. A corneal topographer can measure a larger area of the cornea. It can measure the central area and mid-periphery of the cornea. A keratoscope projects a series of concentric light rings onto the cornea. Misshapen areas of the cornea are revealed by noting areas of the light pattern that do not appear concentric on the cornea. Because these instruments are measuring the cornea, it is also important to have a refraction in case the lens is also contributing to the astigmatism. The refraction measures the optics or visual status of the eye and the result is the eyeglass prescription. The refraction is when the patient is looking at an eye chart and the doctor is putting different lenses in front of the patient's eyes and asks which one looks better.

Astigmatism can be treated by the use of cylindrical lenses. They can be in eyeglasses or contact lenses. The unit of measure describing the power of the lens system or lens is called the diopter (D). The lenses are shaped to counteract the shape of the sections of cornea that are causing the difficulty. Because the correction is in one direction, it is written in terms of the axis the correction is in. On a prescription, for example, it may say −1.00 × 180°. Cylinders correct astigmatism, minus spheres correct myopia, and plus spheres correct hyperopia.
There is some debate as to whether people with very small amounts of astigmatism should be treated. Generally, if visual acuity is good and the patient experiences no overt symptoms, treatment is not necessary. When treating larger amounts of astigmatism, or astigmatism for the first time, the doctor may not totally correct the astigmatism. The cylindrical correction in the eyeglasses may make the floor appear to tilt, thus making it difficult for the patient at first. Generally, the doctor will place lenses in a trial frame to allow the patient to try the prescription at the exam. It may take a week or so to get used to the glasses, however, if the patient is having a problem they should contact their doctor, who might want to recheck the prescription.

Meridian — A section of a sphere. For example, longitude or latitude on the globe. Or, on a clock, a section going through 12:00-6:00 or 3:00-9:00, etc.
Refraction — The turning or bending of light waves as the light passes from one medium or layer to another. In the eye it means the ability of the eye to bend light so that an image is focused onto the retina.
Contact lenses that are used to correct astigmatism are called toric lenses. When a person blinks, the contact lens rotates. In toric lenses, it is important for the lens to return to the same position each time. Lenses have thin zones, or cut-off areas (truncated), or have other ways to rotate and return to the correct position. Soft toric lenses are available in a variety of prescriptions, materials, and even in tints. Patients should ask their doctors about the possibility of toric lenses.
In 1997, the Food and Drug Administration (FDA) approved laser treatment of astigmatism. Patients considering this should make sure the surgeon has a lot of experience in the procedure and discuss the possible side effects or risks with the doctor. In the case of keratoconus, a corneal transplant is performed if the astigmatism can not be corrected with hard contact lenses.

Astigmatism is a condition that may be present at birth. It may also be acquired if something is distorting the cornea. Vision can generally be corrected with eyeglasses or contact lenses. The major risks of surgery (aside from the surgical risks) are over and under correction of the astigmatism. There is no cure for over correction. Under correction can be solved by repeating the operation.

(ă-stig'mă-tizm), [MIM*603047]
1. A lens or optic system having different refractivity in different meridians.
2. A condition of unequal curvatures along the different meridians in one or more of the refractive surfaces (cornea, anterior or posterior surface of the lens) of the eye, in consequence of which the rays from a luminous point are not focused at a single point on the retina.
Synonym(s): astigmia
[G. a- priv. + stigma (stigmat-), a point]
Farlex Partner Medical Dictionary © Farlex 2012

(ə-stĭg′mə-tĭz′əm)
n.
A visual defect in which the unequal curvature of one or more refractive surfaces of the eye, usually the cornea, prevents light rays from focusing clearly at one point on the retina, resulting in blurred vision.
as′tig·mat′ic (ăs′tĭg-măt′ĭk) adj. & n.
as′tig·mat′i·cal·ly adv.
The American Heritage® Medical Dictionary Copyright © 2007, 2004 by Houghton Mifflin Company. Published by Houghton Mifflin Company. All rights reserved.

Ophthalmology A visual disturbance due to irregularity in curvature of the refractive surfaces, which produces a blurred image on the retina and multiple focal points or lines
McGraw-Hill Concise Dictionary of Modern Medicine. © 2002 by The McGraw-Hill Companies, Inc.

(ă-stig'mă-tizm)
1. A lens or optic system having different refractivity in different meridians.
2. A condition of unequal curvatures along the different meridians in one or more of the refractive surfaces (cornea, anterior or posterior surface of the lens) of the eye, in consequence of which the rays from a luminous point are not focused at a single point on the retina.
Synonym(s): astigmia.
[G. a- priv. + stigma (stigmat-), a point]
Medical Dictionary for the Health Professions and Nursing © Farlex 2012

An optical error in which objects in the same plane, but of different orientation, are brought to a focus in different planes at the back of the eye. Thus, vertical objects may be seen in focus while horizontal objects may be out of focus. Astigmatism is usually due to a lack of sphericality in the outer surface of the CORNEA, one meridian being more steeply curved than the others. An astigmatic lens cannot produce a point image of a point object. The defect can be corrected by cylindrical spectacle lenses. From the Greek a , not and stigma , a spot or point.
Collins Dictionary of Medicine © Robert M. Youngson 2004, 2005

Fig. A21 Types of astigmatism (A, against the rule; B, with the rule) 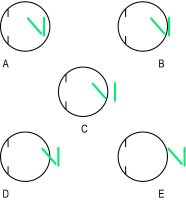 (ă-stig'mă-tizm) [MIM*603047]
A condition of unequal curvatures along the different meridians in one or more of the refractive ocular surfaces.
[G. a- priv. + stigma (stigmat-), a point]
Medical Dictionary for the Dental Professions © Farlex 2012