[ser´k'l]
a round figure, structure, or part.
Berry's c's charts with circles on them for testing stereoscopic vision.
cerebral arterial circle circle of Willis.
Minsky's circle a device for the graphic recording of eye lesions.
sensory circle a body area within which it is impossible to distinguish separately the impressions arising from two sites of stimulation.
circle of Willis the anastomotic loop of blood vessels near the base of the brain. Called also cerebral arterial circle.
Miller-Keane Encyclopedia and Dictionary of Medicine, Nursing, and Allied Health, Seventh Edition. © 2003 by Saunders, an imprint of Elsevier, Inc. All rights reserved.

[TA]
the roughly pentagonally shaped circle of vessels on the ventral aspect of the brain in the area of the optic chiasm, hypothalamus, and interpeduncular fossa; formed, sequentially and in an anterior to posterior direction, by the anterior communicating artery and by the two anterior cerebral, the two internal carotid, the two posterior communicating, and proximal segments of the two posterior cerebral arteries.
Synonym(s): circulus arteriosus cerebri [TA], arterial circle of cerebrum, circle of Willis
Farlex Partner Medical Dictionary © Farlex 2012

Imaging
A large network of interconnecting blood vessels that appear as a circle at the base of the brain.
Segen's Medical Dictionary. © 2012 Farlex, Inc. All rights reserved.

circulus arteriosus cerebri Anatomy A conduit of anastomosed arteries that encircle the optic chiasm and hypophysial region at the base of the brain, consisting of parts of each internal carotid, anterior, middle, and posterior cerebral arteries, and anterior and posterior communicating arteries. See Berry aneurysm.
McGraw-Hill Concise Dictionary of Modern Medicine. © 2002 by The McGraw-Hill Companies, Inc.

(sĭr'kĕl wil'is)
A ring of arteries at the base of the brain formed by anastomoses of the internal carotid arteries and the basilar artery.
Medical Dictionary for the Health Professions and Nursing © Farlex 2012 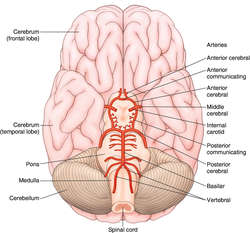 An arterial anastomosis that encircles the optic chiasm and hypophysis, from which the principal arteries supplying the brain are derived. It receives blood from the two internal carotid arteries and the basilar artery formed by union of the two vertebral arteries. See: illustration
See also: Willis, Thomas
Medical Dictionary, © 2009 Farlex and Partners

Thomas, English physician, 1621-1675.
accessorius willisii - nerve that arises by two sets of roots: cranial, emerging from the side of the medulla, and spinal, emerging from the ventrolateral part of the first five cervical segments of the spinal cord. Synonym(s): accessory nerve
chordae willisii - Synonym(s): Willis cords
circle of Willis - an anastomotic circle of arteries at the base of the brain. Synonym(s): arterial circle of cerebrum
Willis centrum nervosum - the largest and highest group of prevertebral sympathetic ganglia, located on the superior part of the abdominal aorta. Synonym(s): celiac ganglia
Willis cords - several fibrous cords crossing the superior sagittal sinus. Synonym(s): chordae willisii
Willis pancreas - a portion of the head of the pancreas formed by the superior mesenteric artery and abdominal aorta. Synonym(s): uncinate process of pancreas
Willis paracusis - the apparent increase in auditory acuity of a deaf person to conversation in noisy surroundings due to a companion's unconscious voice raising. Synonym(s): false paracusis
Willis pouch - obsolete term for lesser omentum.
Medical Eponyms © Farlex 2012

An arterial ring surrounding the optic chiasma and hypothalamus. It is formed anteriorly by the anterior cerebral arteries which are linked by the anterior communicating artery; posteriorly, by the division of the basilar artery into the posterior cerebral arteries and, laterally the latter are united by the posterior communicating arteries to the internal carotid arteries. An aneurysm in one part of the circle of Willis may compress the optic chiasma, resulting in a visual field loss. As the terminal branches of the internal carotid arteries are called the middle cerebral arteries, the circle of Willis is sometimes considered to be formed laterally by the latter (Fig. C11). See internal carotid artery; preretinal haemorrhage; heteronymous hemianopia. 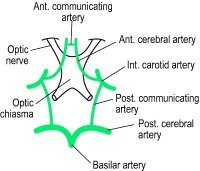