[ul´ser]
a local defect, or excavation of the surface of an organ or tissue, produced by sloughing of necrotic inflammatory tissue.
aphthous ulcer a small painful ulcer in the mouth, approximately 2 to 5 mm in diameter. It usually remains for five to seven days and heals within two weeks with no scarring.
chronic leg ulcer ulceration of the lower leg caused by peripheral vascular disease involving either arteries and arterioles or veins and venules of the affected limb. Arterial and venous ulcers are quite different and require different modes of treatment. Venous stasis ulcers occur as a result of venous insufficiency in the lower limb. The insufficiency is due to deep vein thrombosis and failure of the one-way valves that act during muscle contraction to prevent the backflow of blood. Chronic varicosities of the veins can also cause venous stasis.

Patient Care. Stasis ulcers are difficult to treat because impaired blood flow interferes with the normal healing process and prolongs repair. Patient care is concerned with preventing a superimposed infection in the ulcer, increasing blood flow in the deeper veins, and decreasing pressure within the superficial veins.
decubitus ulcer pressure ulcer.
duodenal ulcer an ulcer of the duodenum, one of the two most common types of peptic ulcer.
gastric ulcer an ulcer of the inner wall of the stomach, one of the two most common kinds of peptic ulcer.
Hunner's ulcer one involving all layers of the bladder wall, seen in interstitial cystitis.
hypertensive ischemic ulcer a manifestation of infarction of the skin due to arteriolar occlusion as part of a longstanding vascular disease, seen especially in women in late middle age, and presenting as a red painful plaque on the lower limb or ankle that later breaks down into a superficial ulcer surrounded by a zone of purpuric erythema.
marginal ulcer a peptic ulcer occurring at the margin of a surgical anastomosis of the stomach and small intestine or duodenum. Marginal ulcers are a frequent complication of surgical treatment for peptic ulcer; they are difficult to control medically and often require further surgery.
peptic ulcer see peptic ulcer.
perforating ulcer one that involves the entire thickness of an organ, creating an opening on both surfaces.
phagedenic ulcer
1. any of a group of conditions due to secondary bacterial invasion of a preexisting cutaneous lesion or the intact skin of an individual with impaired resistance as a result of a systemic disease, which is characterized by necrotic ulceration associated with prominent tissue destruction.
2. tropical phagedenic ulcer.
pressure ulcer see pressure ulcer.
rodent ulcer ulcerating basal cell carcinoma of the skin.
stasis ulcer ulceration on the ankle due to venous insufficiency and venous stasis.
stress ulcer a type of peptic ulcer, usually gastric, resulting from stress; possible predisposing factors include changes in the microcirculation of the gastric mucosa, increased permeability of the gastric mucosa barrier to H+, and impaired cell proliferation.
trophic ulcer one due to imperfect nutrition of the part.
tropical ulcer
1. a lesion of cutaneous leishmaniasis.
2. tropical phagedenic ulcer.
tropical phagedenic ulcer a chronic, painful phagedenic ulcer usually seen on the lower limbs of malnourished children in the tropics; the etiology is unknown, but spirochetes, fusiform bacilli, and other bacteria are often present in the developing lesion, and protein and vitamin deficiency with lowered resistance to infection may play a role in the etiology.
varicose ulcer an ulcer due to varicose veins.
venereal ulcer a nonspecific term referring to the formation of ulcers resembling chancre or chancroid about the external genitalia; there are both sexually transmitted and other types.
Miller-Keane Encyclopedia and Dictionary of Medicine, Nursing, and Allied Health, Seventh Edition. © 2003 by Saunders, an imprint of Elsevier, Inc. All rights reserved.

One or more painful, recurrent ulcers of the oral cavity or vermilion border, preceded by tenderness and pruritus, which begins as an erythematous indurated papule that rapidly erodes, leaving an ulcer covered with greyish exudate. Time from onset to healing: ± 10–14 days.
Segen's Medical Dictionary. © 2012 Farlex, Inc. All rights reserved. 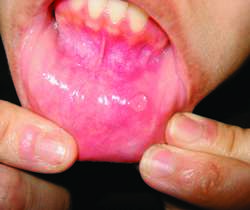 An ulcer of the oral mucosa, usually less than 0.5 cm in diameter. If it persists for longer than 2 weeks, it should be biopsied to rule out cancer. Synonym: aphthous stomatitis; canker sore See: illustration

For patients with oral ulcers, application of a topical anesthetic or a protective paste provides symptomatic relief and makes it possible to eat without pain.

Q. Is it possible to prevent appearance of oral aphthae? I get these a lot and lately I've heard it comes as a result of stress or weak immune system. Is that true? Is there a way to make it go away forever????? anyone who has ever had this annoying thing in his mouth knows what I'm talking about... I know all the possible curing ways- I'm looking for prevention now...thanx!

A. welcome to my life! every time the air get's a little dry i get 1-3 aphthae and can't eat for the next 4-6 days. so i investigated a little, and i'm sorry but right now no one really knows what causes them. they know that from some reason the body get's an immune reaction in the oral mucosa and that causes an ulcer. but a friend of mine went to an Ayurveda therapist that told him to stop eating tomatoes and eggplants (in any way, cooked,baked,fried) and he says he stop getting aphthae. so you might try Ayurveda for prevention. it could help...

Q. aphthous stomatitis can someone please explain me what it is? and what is the best way to treat it?

A. A canker sore (aphthous stomatitis) is an illness that causes small ulcers to appear in the mouth, usually inside the lips, on the cheeks, or on the tongue. What causes aphthous stomatitis (canker sores)?
The exact cause of this disease is not known. There are many factors that are thought to be involved with the development of canker sores, including:

The following are the most common symptoms of aphthous stomatitis. However, each child may experience symptoms differently. Symptoms may include:
Ulcers in the mouth, usually inside the lips, on the cheeks, or on the tongue
Ulcers that are covered with a yellow layer and have a red base
For the full article:
http://www.cincinnatichildrens.org/health/info/oral/diagnose/aphthous-stomatitis.htm Hope this helps.


More discussions about aphthous ulcer
This content is provided by iMedix and is subject to iMedix Terms. The Questions and Answers are not endorsed or recommended and are made available by patients, not doctors.

Feedback
Flashcards & Bookmarks ?
Please log in or register to use Flashcards and Bookmarks. You can also log in with
Flashcards ?
My bookmarks ?
+ Add current page to bookmarks
Mentioned in ?
References in periodicals archive ?
Apthous ulcers also interfere in eating and swallowing.
Prevalence of recurrent herpes labialis and apthous ulcers among young adult on six continent.
FREQUENCY AND PATTERN OF RECURRENT APTHOUS ULCERS IN PATIENTS REPORTING TO ORAL MEDICINE AND DIAGNOSIS DEPARTMENT OF ISLAMABAD DENTAL HOSPITAL
It was reported that 73% patients with B 12 deficiency when given B12 therapy recovered completely while, 70% patients with recurrent apthous ulcers improved with hematinic replacement therapy8,14,21 .
Association of Vitamin B12, Serum Ferritin and Folate Levels with Recurrent Oral Ulceration
Key Words: Apthous ulcers, frequency, stress, spicy foods.
The apthous ulcers are classified depending upon their sizes.
Minor ulcers make up more than 80% of all recurrent apthous ulcers. They are shallow and well circumscribed, whereas major apthous ulcers are deep.
The etiology of apthous ulcers is not entirely clear.7
FREQUENCY OF APTHOUS ULCERS - A STUDY
Keywords: Diarrhoea, Pharyngitis, Apthous ulcers, Neutropenia, Granular lymphocytes.
A case of cyclic neutropenia in adults
A number of different treatments exist for apthous ulcers including: analgesics, anesthetic agents, anti-septics, anti-inflammatory agents, steroids, sucralfate, tetracycline suspension, and silver nitrate.8 The appli-cation of silver nitrate will cauterize the sore; a single treatment reduces pain but does not affect healing time.9 Topically, Corticosteroid preparations contain-ing hydrocortisone hemisuccinate or triamcinolone acetonide to control symptoms are effective in reduc-ing inflammation10 and treating severe aphthous ul-cers.11,12 Triamcinolone acetonide 0.1% is used as topical application 2 to 3 times a day for the treatment.
Sixty patients of Recurrent Apthous Ulcers, both genders having age ranging from 20 years to 40 years reporting to ENT Department Combined Mili-tary Hospital, Peshawar and Quetta from 1st August 2008 to 31st May 2010 were recruited in this study after formal approval of hospital ethical committee.
Other treatment options tried to treat apthous ulcers are analgesics, anesthetic agents, antiseptics, anti-inflammatory agents, sucralfate, tet-racycline suspension, and silver nitrate.8 Silver nitrate topical application reduces symptoms but does not affect healing.9 Use of local antimicrobials has been also attempted.
A COMPARISON OF ORAL AND TOPICAL STEROID THERAPY FOR RECURRENT APTHOUS STOMATITIS